On Lionheart’s Oscar ban: Is Nigerian English a Foreign Language?

US universities treat Nigerian English as a foreign language. The Oscars say it is not foreign enough. 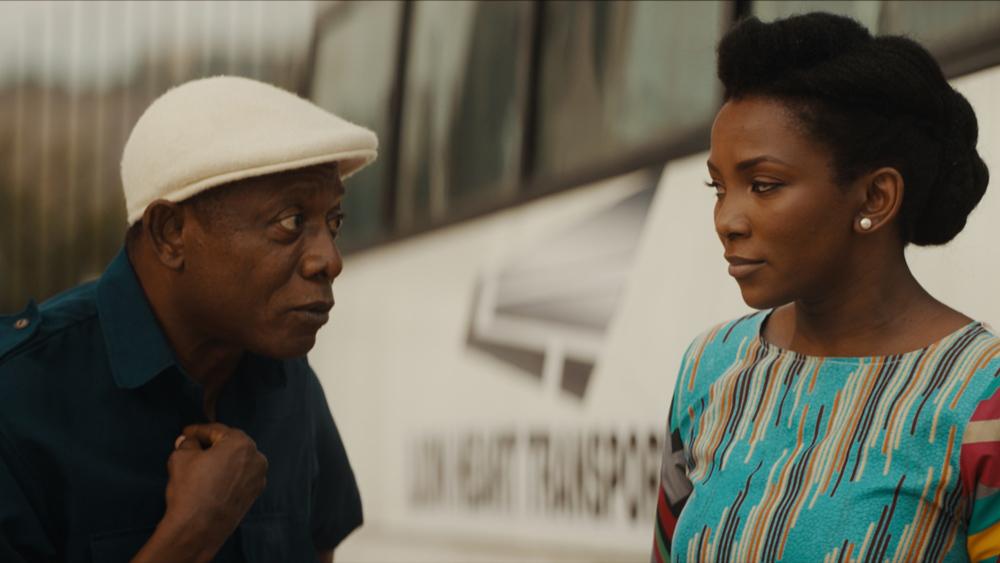 A still from the film Lionheart.

As a linguist and former teacher of English, I have always wondered why Nigerian English has never been deemed official by law and recognised, in its uniquely identifiable variant, as different from British and American English. Its phonology (we stress the third syllable [ad-mi-RAL-ty] rather than the first [AD-mi-ral-ty], for instance), syntax (we say “let me be going” for “I have to leave now”; “senior brother” rather than “elder brother”; and “next tomorrow” rather than “day after tomorrow” etc), and lexicon (words like “trafficate” and “overfloat”, all distinctly Nigerian) already qualify it as almost a different language. Why else, for instance, would foreigners say “pardon?”, “scuse me?” and “say it again” so many times when speaking to us?

I know why, of course. We are a colonised people so we retain a belief in the inviolability of the foreign English variant, even when we cannot successfully imitate it without creating a hilarious impression. We think that accepting a “Nigerian English” means conceding defeat and accepting a “ghetto“ version of a language so graciously bequeathed to us.

But because language is dynamic, it was always bound to evolve into something else. British English is British English, but American English is something else, as is Indian English, Australian English or Kenyan English. Over time, we have evolved our own way of speaking — not Nigerian Pidgin, mind you, which is a totally different language and a creole — which is unique in every way. And yet we have not officially recognised it, encouraged it or even admitted that it exists in a way that could set us free from the constraints that have harmed rather than helped.

In our secondary schools, for instance, the Oral English syllabus still bases its teaching of sound pronunciations on the parameters of British English with a focus on stress patterns that make students laugh or wince rather than learn anything at all. Take any exam papers from WAEC and JAMB today and wonder why we still have the schwa when nobody ever uses it in real speech. Our “above” is typically pronounced with the /a/ fully realised. Same with “across” and “away”. We pronounce “church” with a strong rounded vowel in the middle. The English sound that makes it sound like “cherch” doesn’t quite work with Nigerian English phonology. And yet, students are penalised for not adhering to these British sound and stress patterns which they will never use as soon as they leave the class. Who knows how many of the people who make up the annual failure rates in English exams in Nigeria got there because they rhymed “lumber” with “bomber”.

Nollywood gave us a way out along with other means of artistic expression from Nigeria. Without regard to what the “original” language sounds like, Nigerian creatives have tailored their language and creativity through a uniquely Nigerian lens, giving us iconic characters from Sam Loco Efe, Jọkẹ́ Silva, Lárìndé Akinlẹ̀yẹ, Yẹmí Ọdúnladé, Genevieve Nnaji, Ọmọ́tọ́lá Jáladé-Ẹkẹ́ìndé, Uche Jombo, Kúnlé Afọláyan, among many others, whose cadence and rhythms of speech have become recognisable from a distance. Their artistic and creative oeuvre has established them and Nigerian cinema across the world but in their own language, culture, and artistic style which is uniquely Nigerian — even when occasionally expressed through the medium of English. It has put Nigerian English on the map in the way that the school syllabus refused to do.

So when Lionheart, a movie directed by Genevieve Nnaji, was disqualified for its Best International Feature Film category nomination at the Oscars because of an Academy rule that says “entries in the category must have ‘a predominantly non-English dialogue track’” — something that Lionheart lacks because its primary language was Nigerian English — it was worth asking again just how familiar American audiences are with creative works in the language to wield that rule with such ruthless certitude. They are within their right, to be clear, to decide what qualifies for certain categories. But, as I argued on Twitter earlier, that Nigerian English is actually indeed a foreign language to most Americans — just as American English is deemed foreign to prospective Nigerian students — is an argument worth making.

I had to write the TOEFL exams before I was admitted to an American university for graduate school. The “F” in TOEFL stands for “foreign”, to suggest that the English language the students would encounter in the US is a foreign variant to the one they already speak. When I asked colleagues, a couple of years ago while I was in graduate school, if anyone in America would give me a job in an high school open only to “native speakers”, I was told no. A native speaker, to Americans, means someone who was born or who grew up in America, speaking American English. Or someone from Great Britain. That’s it. Colonised by Great Britain for over a hundred years doesn’t quite count. You speak a different language.

The argument itself comes from an old attitude to the “purity” of language best codified by the Indian linguist Braj Kachru. He wrote in the mid-1980s what is known as the Concentric Circles of English to explain the hierarchies that exist around the world today. Kachru describes an exclusive Inner Circle which contains only a handful of countries considered the “norm providing” societies whose citizens can be called “native speakers”. These countries are the US, UK, Canada, Australia and New Zealand. The Outer Circle follows, which contains societies where English is used as an official language. Countries like Nigeria, the Philippines and India fit this description and are said to be “norm developing”, which means we take what we’re given from the inner circle and develop it further. We do not really “provide” or contribute to the development of the language itself. The last circle is the Expanding Circle, which includes places where the language is merely adopted as an international language or language of trade (e.g. China, Korea, Japan, Greece, Poland). These people are “norm dependent”. They only take what they are given.

Speakers of English in any circle other than the Inner Circle are never to be considered native speakers, no matter their level of competence, which brings us to the real problem when applied to real life scenarios. A typical Nigerian university graduate has spent 18 years going through an English-medium education, a language that has been used in Nigeria for at least 105 years. By the time they are applying to attend graduate school at a university in the US, they can speak English fluently, have likely read and been tested on works by Shakespeare, Ṣóyínká, Achebe, Conrad or Wordsworth. They have read George Orwell, Virginia Woolf and Toni Morrison. By the time they complete the university application form, they are met with one last requirement: to write the TOEFL, a paper-based or web-based standardised exam. It is described on Wikipedia as a test “to measure the English language ability of non-native speakers wishing to enroll in English-speaking universities.” Emphasis mine. Without it, they are not deemed competent enough to complete a research or study programme in the US.

What they speak, Nigerian English, is a foreign language to American universities. Which should mean, conversely, that it is native to Nigeria. Why then haven’t our syllabi caught up?

In July 2019, Google released its Nigerian English voice, but users knew immediately that their devices were speaking in Nigerian English even before the project was officially announced. This speaks to the uniquely identifiable character of the language, something I expounded on in a podcast months ago. Let us ask native speakers of British or American English visiting Nigeria if they can always make out what we are saying in English during the first few weeks of their arrival and it would be clear that we hardly speak the same language.

And so, before the next movie made in Nigerian English is disqualified by a foreign organisation for being “not foreign enough”, how about a history lesson, along with an experiment of having the judges in that category sit down to watch the movie — without subtitles — to see if there is no comprehension barrier. In the case of Lionheart, there were also many other Nigerian languages used and a typical American viewer may have needed interpretation to make sense of it all.

Or not; a different but larger point for the Oscar category is whether using the English language itself suddenly makes Nigerian movies in English any less foreign. I don’t think so. Lionheart, after all, is based in Nigeria and is a story of Nigerians, speaking in many Nigerian languages, facing uniquely Nigerian ordeals.

To quote Chinua Achebe: “My answer to the question Can an African ever learn English well enough to be able to use it effectively in creative writing? is certainly yes. If on the other hand you ask Can he ever learn to use it like a native speaker? I should say, I hope not. It is neither necessary nor desirable for him to be able to do so. The price a world language must be prepared to pay is submission to many different kinds of use. The African writer should aim to use English in a way that brings out his message best without altering the language to the extent that its value as a medium of international exchange will be lost. He should aim at fashioning an English which is at once universal and able to carry his peculiar experience. I have in mind here the writer who has something new, something different to say.”

I am an avid advocate for more active use of Nigerian languages in art, music and movies and might have been tempted to celebrate the disqualification of Lionheart as a future incentive to submit more fully Nigerian language films for international prizes. Maybe so. (This year, after all, there was Mọ́kálìk by Kúnlé Afọláyan which is a brilliantly realised ballad of a movie, in Yorùbá, worthy of any international prize, which was not nominated). But that won’t be enough. Movies are not made for prizes, but for relevant audiences. And while we can do with more movies in many more Nigerian languages, the English-speaking Nigerian audience, for which Lionheart was made, accepts it as an authentically Nigerian film. It is the hypocrisy of American language gatekeepers that I find more deserving of scrutiny. The unique language with which we continue to express our creativity is either recognised as distinctly ours or distinctly international. The continued insistence on TOEFL for university applicants only makes a mess of that distinction.

Nigerian English is a Nigerian language and already a veritable medium of our artistic and creative expressions. Our own inscrutable refusal to codify and officially recognise it as such at home is the other part of the problem.

Kọ́lá Túbọ̀sún is a linguist, writer, and scholar. His debut collection of poetry Edwardsville by Heart was published by Wisdom’s Bottom Press in 2018. He is the first African awardee of the Premio Ostana, a prize given by Chambra D’Oc in Italy, for work and advocacy in the mother tongue. He’s the 2019 Morland Writing Scholar, and the 2019/2020 Chevening Research Fellow, on the African language printed collection from the 19th Century, at the British Library in London.