Six things you need to know about the movement to end police brutality in Nigeria. On 3 October, two days after Nigeria’s Independence Day, a grainy video was posted to Twitter that purportedly showed an attempted murder. A shooting at point blank range. Two unarmed men dragged from a hotel in Delta State by a group of armed men. A gun pointed to the floor. A loud, familiar crack. Smoke.

To any Nigerian watching the video, the armed group was familiar. They were members of the Special Anti-Robbery Squad (SARS). This police unit was initially set up to fight violent crime but is now accused of perpetrating it instead.

SARS is infamous for targeting well-off young people who they allegedly suspect of making money through illegal means. If you are 18-35, have an iPhone, tattoos, drive a nice car or carry a laptop, you could be a target. You could be beaten up, robbed, tortured and extorted. In some cases, such as that of the as-yet-unidentified man in the video, you could be killed. Amnesty International says at least 82 people died at the hands of SARS between January 2017 and May 2020.

No SARS official has been charged for their crimes.

As the video was shared widely across the internet and particularly Twitter, outrage swelled. The outrage wasn’t new either. Nigerians had been calling to #ENDSARS  since 2017 with Twitter users sharing their experiences at the hands of the police unit. This time the issue burned quick, garnering over 28 million tweets and trending worldwide by Friday 9 October.

This outrage soon turned to protest. Over the past seven days and in at least 13 Nigerian states, thousands of people – men, women, queer people, the differently-abled, from varying religions, ethnic groups and political affiliations – have spilt onto the streets. Yesterday in Ibadan, even soldiers joined the protesters. They are demanding an end to the rogue police unit, justice for all deceased victims of police brutality, and investigations and prosecutions of police misconduct. 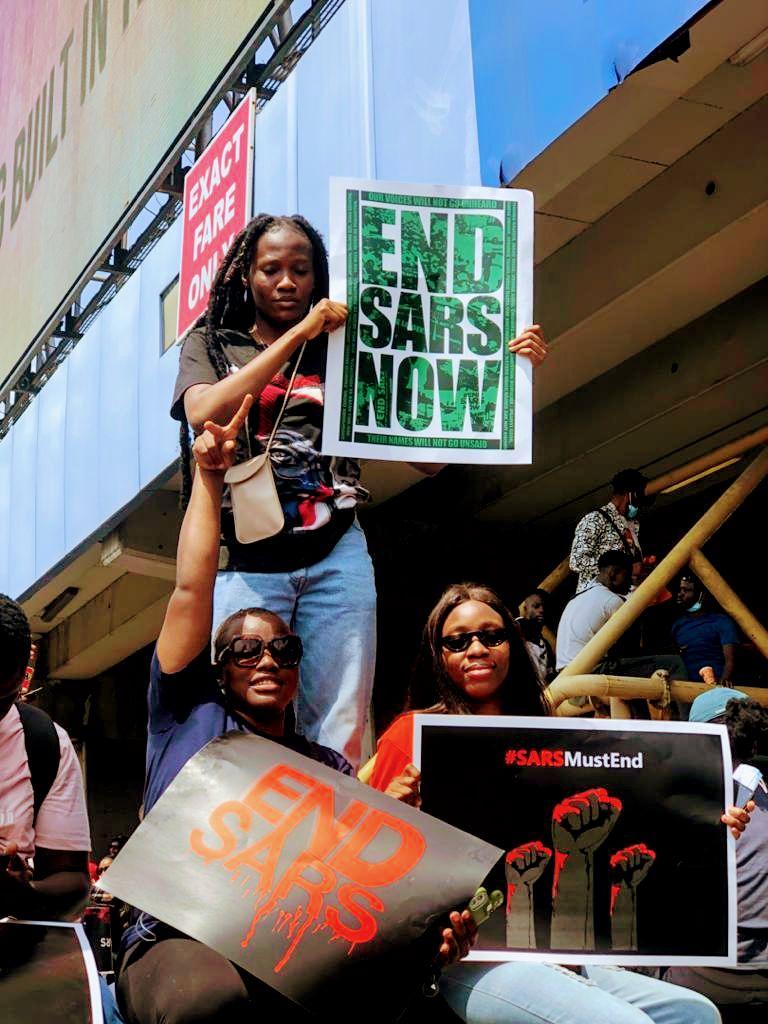 On 11 October, the Inspector General of Police announced that SARS has been disbanded. On 13 October, he said a new tactical unit, called the Special Weapons and Tactics Team (SWAT), would replace it. No one is convinced. Between 2017 and now, the police has claimed the unit would be “re-organised”, “overhauled” and “reformed” but with little effect.

Here are six aspects of the movement you should know about:

The Nigerian police have been enthusiastic in proving why a people’s movement against police brutality is necessary. At protests across the country, they have opened fire on unarmed peaceful protesters, attacked them with wooden clubs, teargassed them, and hit them with water cannons. They have vandalised vehicles, broken windscreens, and slashed tyres. They have left fractures, dislocations, bleeding and death in their wake. According to Amnesty International, ten people have died in the protests so far.

One protester told African Arguments that while she was being beaten up, the policemen asked: “Who paid you?” and “after this, will you come out again?” This highlights two things. The police do not think the protests are genuinely motivated. And they appear to be counting on the show of force to intimidate protesters into staying home. It has not worked thus far.

If you’ve no access to social media and depend only on traditional print media, like most Nigerians above 40, you may not have a fully accurate picture of the protests. Several media outlets have engaged in an apparent obfuscation of the facts.

Guardian Nigeria, for instance, published a now-deleted post on ethnic rifts amongst protesters. This is a well-known fault line used by politicians to sow divisions and, in this case, is not true. In fact, Nigerians seem to have united across divisions of ethnicity, geography, religion, gender and sexuality.

Many national publications have also parroted the police’s line in reporting on the protests. On Monday 12 October, for example, protests in Surulere, Lagos, turned violent when the police opened fire. Eyewitness statements and videos show the police attacking the demonstrators. A bystander, Ikechukwu Ilohamauzo, was fatally shot.

Several newspapers, however, echoed the police account of events with some, such as Pulse and Vanguard, running near-identical pieces. With little context about the motives of the demonstrations, they suggested the protesters were in fact responsible for the violence and published claims that the demonstrators had laid siege to a police station to free jailed suspects, killing one policeman and injuring two. This incident has not been corroborated beyond the police account and the man charged with the alleged murder was soon released.

See what soldiers are doing to protesters in Abuja. pic.twitter.com/2MnBngD0bm

“The protest is for our lives, it’s for our future. We want SARS to end but SARS is just the beginning. They should just wait for us. We’re not quiet anymore.”

When two young women were asked what the protest was about, these were their responses. They appear typical of the critical mass of protesters who are around 18-22 years old, are particularly fearless, and are protesting for the first time. Their lack of experience, however, should not be taken as a lack of knowledge. When police have fired teargas, for instance, some protesters have swung into action to defuse the chemical weapon’s effects.

“It struck me that they may have picked up a few lessons from the Hong Kong protests,” Stanley Achonu, a civil society advisor present at the protests, told African Arguments. “There was something surreal about those – I don’t want to call them kids – protesters that was different. I have been to every protest since when Yar’adua was president [2007-2010]. This one is clearly different.” When the police have used water cannons, live ammunition and tried to disperse protesters, the demonstrators haven’t gone home battered and defeated. Even while some were wounded, they simply regrouped. On Sunday 11 October in Abuja, the protesters were dispersed and attacked at least twice, regathering and regrouping each time.

“They are not following any playbook. They are following theirs. They are not beholden to the generation that came before them. They are just looking forward,” says Olabukunola Williams, Executive Director of Education as a Vaccine, who was also at Sunday’s protests.

“A lot of people driving and leading this protest are not from civil society. They have their own businesses, they work in tech…they’ve become the unofficial leaders of sustaining the movement.” In January 2012, there was a massive wave of protests in Nigeria. The #OccupyNigeria movement spread across the country protesting against an increase in fuel prices. Though the demonstrations started sporadically, trade and labour unions soon assumed leadership and were invited to closed-door meetings with the government. Before long, the unions struck a deal. They called on protesters to go home, while the government deployed tanks onto the streets.

The consensus among many was the unions sold out the #OccupyNigeria movement. Today’s protesters seem determined to learn from this lesson.

The #ENDSARS movement has started organically and sporadically with no clear leaders or organisers. Among other things, this has made it more difficult for the government to quell them. Some high-profile figures – such as musicians Davido, Falz and Small Doctor – have joined the protests. However, while welcoming their support, people have been adamant that they do not represent them.

On 12 October, Davido was invited to a meeting with the Inspector General of Police. He was accompanied by D’banj, a musician alleged to have previously exercised his influence with the police to kidnap and coerce a young woman that had accused him of rape. Davido was set the task of establishing an independent panel to monitor police activities. The protesters were clear, however, that the country’s highest-ranking police officer asking one private citizen to hold the body responsible is no solution.

Some protesters have even resisted attempts by the anti-police brutality campaigner Segun Awosanya, who was also at the meeting, to speak for the movement. Awosanya, who galvanised the #ENDSARS protests in 2017, claimed that the movement is his to lead and accused others of hijacking it in a now-deleted Twitter thread.

While the movement has no leaders, a feminist coalition has taken it upon itself to fundraise, organise legal support, and provide medical care and food for the protesters. Awosanya called this group a “cult” that wants to hijack the movement in order to “weaponise it against the state”.

There is no evidence of this. Instead, the coalition – along with others – has disbursed money to protesters across the country, organised lawyers for those arrested, provided ambulances and first aid, and insisted that protests be peaceful. For their troubles, the coalition had its donation link deactivated on 14 October. By whom, it is not yet clear. The group said it is “under attack” and that “our members’ lives are also being threatened”.

Get #EndSWAT back to the top of the trend please. We ain't on the streets but we still got our own part to play. We can't stop now. Comment with the hashtag #EndSWAT and retweet. pic.twitter.com/6uonk4cJtj

The movement shows no signs of losing energy or intensity. More protests are scheduled for today and will continue until the government is seen taking concrete action and not just making pronouncements with regard to protesters’ demands.