Youth, Peace and Security in the Horn of Africa

Why the adoption, ratification and domestication of regional and international frameworks for the youth, peace and security agenda is important for countries in the Horn of Africa. 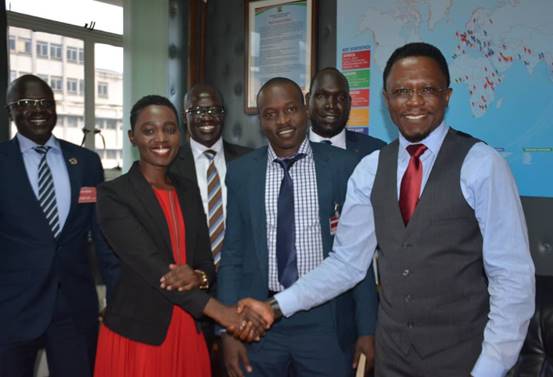 A lobby meeting with the author as youth delegation lead to the Chief Administrative Secretary in Kenya’s Ministry of Foreign Affairs; acting as the rapporteur for the IGAD Council of Ministers in 2018.

The Horn of Africa region is home to diverse ethnic nationalities with a majorly young demographic. Identity is extremely important in all its countries and has been a crucial driving factor in the political conflicts that mar the region. Young people are disproportionately involved as child soldiers, vigilantes, rebels and militias in all its most recent conflicts. While they appear as the major performers, they are often not the innovators of political violence. It is usually older decision-makers with the political power or the threat of it, who start the idea of war, but find it easy to use the youth as fuel for it. This is partly because while youth identity exists in other ways, it is not meaningfully considered in decision-making, and the youth of the region suffer every failure of governance that manifests in the form of unemployment, lack of education and development. As such, many young people are a readily available disgruntled group that can be exploited by other identities as well. Therefore, although most conflicts in the region are political, they often quickly become ethnic and they are also sustained by the commitment of disenfranchised youth.

Sudan, South Sudan, Somalia and Eritrea have been characterized by violent conflicts and significant political instability for more than two decades. They are real examples of this form of a polity that is not properly inclusive of youth, by virtue of failing to adopt, ratify, deposit and domesticate the African Youth Charter. The same countries lag behind in reasonably establishing national policy frameworks that mainstream the content of two key United Nations resolutions that recognize and promote the positive contributions of youth to peace and security: UNSCR2250 and UNSCR 2419. This clearly shows that these countries do not properly recognize the potential, efforts and participation of youth in realisation of national and regional peace, security and development. They are not well prepared to positively harness the demographic dividend from their youth. There is more investment in negative exploitation of the potentials of their youth. Those that attempt to, do so symbolically, not substantially. It is therefore not surprising that all remain more fragile in comparison to other countries in the Horn of Africa.

However, some experience shows that when policy-making entities have had even the smallest focus on addressing the issues of youth, peace and security, there have been almost irreversible positive effects that can be built upon for good. South Sudan, where political and inter-communal violence prevails, has experienced notable intervention by the Inter-Governmental Authority on Development (IGAD) in a bid to return it to stability. The country currently appears more of a de jurethan a de factostate. It also still comprises ethnic nations yet to genuinely identify as one. There is indeed a South Sudan, but not many de factoSouth Sudanese. This is also partly because there are generally not many progressive policy frameworks such as those meant to cultivate national identity, and where they do exist, implementation is a mammoth challenge when the political leadership is stuck in crisis management that comes with perennial conflicts. Consultation of youth on the HLRF in South Sudan in 2018

Two major political conflicts that began in South Sudan in 2013 and 2016 necessitated the intervention of IGAD as a regional bloc to help the parties negotiate and sign a truce in 2015and 2018 respectively, and place the country back on the path to peace and stability. The first instance resulted in the signing of the Agreement on the Resolution of Conflict in the Republic of South Sudan (ARCSS) in August 2015, but there was no salient recognition of youth as key stakeholders in negotiating it. Instead, civil society groups in the country that cared to integrate some youth in their accredited delegations to the peace talks took the initiative to leverage their individual invitations to ensure that the ARCSS captured some youth-responsive provisions. These include the representation of youth as stakeholders to mechanisms of the ARCSS as well as envisaging establishment of the Youth Enterprise Development Fund. At the time, UNSCR2250 had not been adopted yet. Attempts to implement the ARCSS witnessed the eventual participation of youth in mechanisms of the peace agreement such as the Joint Monitoring and Evaluation Commission, to which I was the designate youth representative and member. Collapse of the ARCSS in July 2016 resulted in the need for a High Level Revitalization Forum (HLRF) in December 2017, with the express mandate of including estranged groups as additional and new actors, with consequent revitalisation of the ARCSS. The HLRF happened after the advent of UNSCR2250 and widespread global advocacy for more inclusive peace processes that guarantee meaningful youth participation. South Sudan’s civil society organizations that are also mostly youth-led galvanised and leveraged this wave to urge IGAD to ensure youth participation in the HLRF. Again, as a result, I had the distinct honour to represent South Sudan’s youth, negotiate and sign the peace agreement, R-ARCSS, which culminated out of the HLRF at the end of 2018.

Consequently, IGAD had foreseen the negotiation of the R-ARCSS in times that inferred the need for youth inclusion. Youth were accredited as special stakeholders and signatory to the R-ARCSS. The R-ARCSS became the first ever Track 1 peace agreement in the world to have been signed by youth. Youth gains registered in the R-ARCSS include: Notably, it is worth reiterating that all this became possible through the action of a proactive civil society, youth groups and a policymaker in the form of IGAD that was willing to respond to the global order and trend. Some of the specific gains achieved by youth in the R-ARCSS arose out of consultations made among youth across the political divide as well as lobby and advocacy meetings with relevant decision-makers within the IGAD leadership. It also happened without the enactment of the South Sudan National Youth Policy or any other youth-centred legislation. There was the existence of a national youth union, a body established by a ministerial order, to be the umbrella under which youth can be organised across the country, yet the divisive politics amongst warring parties became reflected in it and made it difficult for it to serve its purpose as expected. More youth of South Sudan are now more enthusiastic about following progress in the implementation of the peace agreement because they see themselves as stakeholders and partners in peacemaking. They have a great sense of responsibility to participate in the peace process and peace building in general. Their participation in the peace process has opened doors to their enhanced involvement in national decision-making with likely increased youth representatives from different parties once the Transitional National Legislative Assembly is formed. This trend, if it is sustained, will increase the prospects of a peaceful South Sudan. It is also likely that unless extremely retrogressive leaders take charge of the country, these gains are irreversible and will be the basis for future strides to be made by South Sudan’s youth in the governance, peace and security of their country.

It is against this background that policymakers in the Horn of Africa should capitalize on the persistence of conflicts and fragility in the aforementioned countries especially as a resounding premise to nudge for the creation of and tangible reliance on national policy frameworks that mainstream precedents set in regional and international frameworks on youth, peace and security. But this must start with the adoption and ratification of the existing relevant regional and international policy frameworks on the subject of youth, peace and security. With this, the issue of youth as a cross-cutting identity will be addressed better and will indirectly result in resolving grievances of other identities in which youth are inherently always existent. Good budget allocations for funding the implementation of legislative frameworks on youth peace and security are critical. This means that policymakers such as regional institutions should not only demand the compliance of member states, but also support them with necessary resources where there is deficiency. Implementation of the same should also mainstream the women, peace and security agenda among youth. Female youth are more excluded and marginalized than their male counterparts whenever youth are deprived of participation in governance and leadership. These are some of the critical efforts that must be undertaken by policymakers in a bid to change the narrative and practices of peace and security. Africa as a region appears to have good written frameworks at the African Union level and in its different regional blocs, yet to its youth, these are perceived as the existing difference that doesn’t make a difference.

Africa and Covid-19: Why We Need Pandemic-scale ...

The pandemic has set gender equality back. ...

Emmily Koiti is a South Sudanese medical doctor by training and a peacebuilder and human rights activist. She is part of several South Sudanese youth peacebuilding and women's platforms, and those of the broader civil society. Emmily participated in representing South Sudan's youth in the track 1 peace process and signed the peace agreement as a youth representative. She has been invested in the South Sudan peace process since conflict erupted in December 2013. In addition to her medical career, she is keen on facilitating citizens, especially youth, women and other marginalized groups to be informed and to ensure that the use of power in governance benefits all.