“It’s not about race, it’s about slavery” 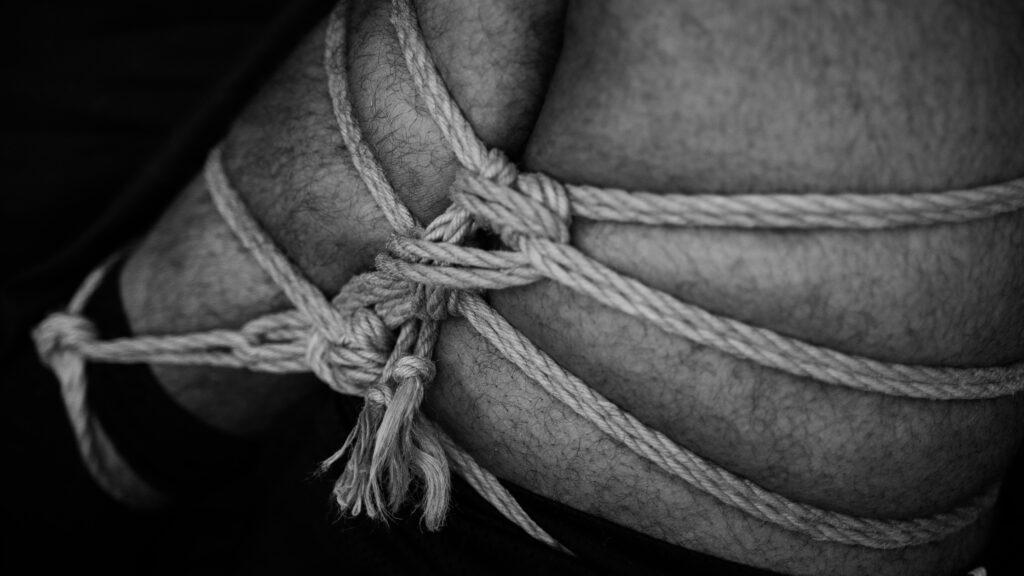 One afternoon in 2018, while standing with my forehead against the wall of my bedroom in Johannesburg, arms above my head, legs sprawled apart, and wearing only a pair of black panties. With my consent, Sunga Konji, an exquisite Zimbabwean rope practitioner, flogged my back.

I expected to feel the pleasure of pain. But instead, I suddenly felt like we were playing out a scene in a movie where I was a cotton-picking slave and he was my owner. It did not feel good. I stayed quiet in the moment, confused by why I felt this way and why notions of coloniality had risen even though we are both Black.

Konji and I discussed it in our after-care session, but several years later, I have noticed that similar conversations are rarely had more widely. There have been recent efforts to increase Black representation in kink – pushing back against notions that it is “ungodly” or the preserve of white people – but few discussions of coloniality despite its prominence in the scene through ideas of “masters” and “slaves”, shackles and chains.

To begin having these conversations, I spoke again to Konji and with Black feminist sexual wellness practitioner Mamello Sejake.

Being kinky without a power system

Konji has been living in Cape Town for over a decade. Over the years, in South Africa’s predominantly white kink space, he has often observed Blackness being fetishised in uncomfortable or offensive ways. He once attended an event that featured a “slave auction” in which submissives were sold to the highest bidders. He was told that the performance was “not about race, it’s just about slavery”.

Konji says that he works hard to propel a pro-African stance, making him intolerant to “weird racial things”. With his white clients, if need be, conversations on racial dynamics are had. Further engagement is discontinued if he deems their behaviour unacceptable. However, he believes that to decolonise the scene in South Africa requires diversity- in representation as well as conversation. An example of this has been a more recent practice of replacing the master/slave and dominant/submissive frameworks with new ones. Konji believes that these typically used concepts, in which one person owns or controls another, are focused on power systems and are not necessary in kink.

In his work, he instead presents himself as someone who facilitates needs and desires.

“You can be kinky and still enjoy a good time without needing a power system to exist,” he told African Arguments.

When I spoke to Sejake about coloniality in kink, she saw matters quite differently. She too has frequently come across the master/slave trope and the use of implements often associated with slavery. She shared a story of not enjoying engaging in play with a Black womxn that involved a stockade. However, that was not because it triggered notions of coloniality. To her, it was merely a moment in play that was intriguing but ended up not being as pleasurable as she had initially imagined. Sejake does not see the frameworks and toys typically used in kink as inherently problematic.

“We play with chains and whips, right? Some of the toys that we play with have been used in very violent ways,” Sejake said. “[But] everything is given power and meaning if we give it. Within kink you get to play around with that power. You get to diffuse it.”

For her, a bigger problem in kink is that it is often narrowly understood in Eurocentric and heteronormative ways as opposed to a more nuanced understanding of kink as centred around human yearning and enjoyment. She argues that the scene should be making more room for African traditions and customs. Sejake offers the example of labia stretching, which is particularly prevalent in Rwanda and Uganda but practised in several eastern and southern African countries. The custom increases sexual pleasure and facilitates orgasms and female ejaculation, but is sometimes referred to as “mutilation” in the West. Sejake believes our understanding of kink should be expanded to include African practices such as these.

“Kink supersedes race and geography. It comes with human nature to explore, desire and play. The only difference is in the ‘how’,” she said.

“Benefit to working with someone who is white”

My conversations with Konji and Sejake demonstrated how differently people understand kink and the role of coloniality in it. These differences highlighted even more clearly both practitioners’ emphasis on the importance of communication and empathy.

Sejake referred to kink as “care work” that involves “compassion and understanding and not just sensation work”. Konji even went as far as to suggest that the space created by kink can be the perfect forum to wider difficult interracial dynamics. “If you are someone who is tired of having to deal with this racial shit every single day in South Africa, I would see the benefit to working with someone who is white,” he said.

Early last year, I did just that. I began a kink relationship with a white man in which we openly discussed class, race, and power. In doing so, we decided to discard the dominant/submissive label after an innocent reference to ownership by him made me cringe. I identified as a “switch leaning towards submission who enjoyed being pleasured”, while he identified as a “submissive who enjoyed pleasuring”. He facilitated my needs, desires, and pleasures by tying me with rope, handcuffing and blindfolding me, and spanking me.

I cannot say that this relationship has helped me navigate racial dynamics outside of the space we created, but the way in which we both practiced empathy – which is rare, especially among heterosexual white men, no matter how “woke” they are – has helped me develop an even deeper and more nuanced conception of the complexities of what kink can be.

Thandiwe Ntshinga is a South African freelance writer. Her work employs intersectional analysis on social issues with a particular focus on race and racism.