Winners and Losers of Red Sea Politics in Sudan 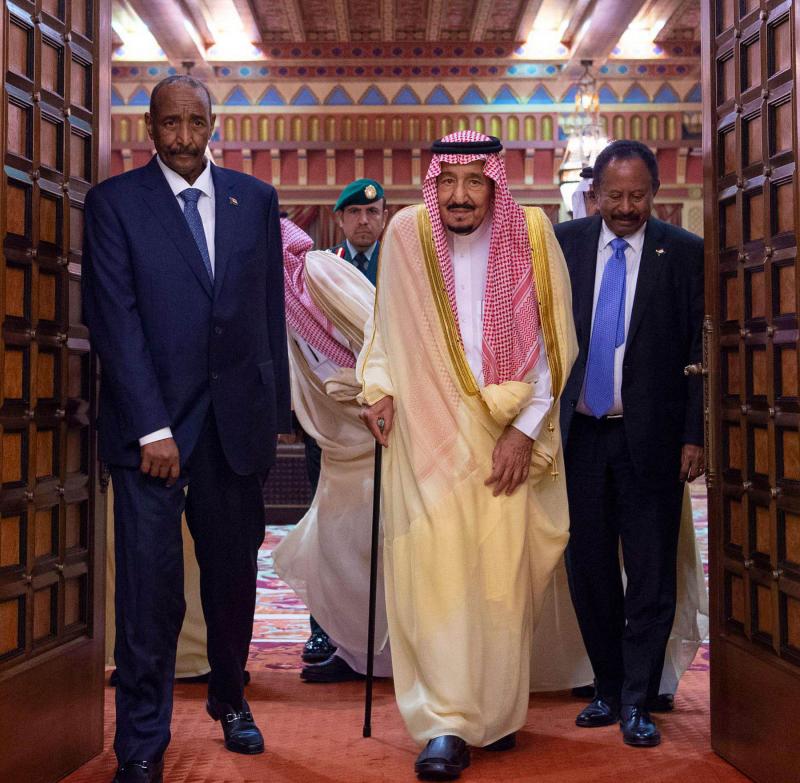 Current tensions between Saudi Arabia and the UAE have encouraged a deepening of  diplomatic relations between the Saudi government and the transitional authority in Sudan. However, these foreign policy developments have not engendered a shift in the military’s approach and attitude towards its civilian counterpart for the benefit of the transition period.

Saudi Arabia is deepening its influence in Sudan. As chair of the Friends of Sudan Conference in August 2020, the platform allowed it, among other things, to influence the Sudanese Revolutionary Forces (SRF)—a coalition of armed groups who represent the peripheries of Sudan—to sign the Juba Peace Agreement (JPA). Recent tensions between Saudi Arabia and the UAE will further encourage Saudi foreign policy interventions in Sudan through deepening its relations with both the civilian and armed components of the transitional government. This move comes with the possibility of the Sudanese military abandoning its alliances with the UAE, allowing Saudi Arabia considerable influence over Sudanese foreign policy.

Saudi Arabia’s recent foreign policy interventions in Sudan started with it announcing a $3 billion bilateral increase in funding to Sudan’s various sectors. Notwithstanding that the country is pressed for foreign reserves, these funds come with a concern that Sudan is caught between Saudi Arabia and UAE tensions, polarising competing segments of the transitional government, and further undermining the transition period.

An additional source of concern is the Sudanese military’s recent restoration of relations with both Turkey and Qatar, signalling the military’s intentions to continue to hold power in Sudan through positioning itself with the Gulf’s interests beyond the supposed conclusion of the transition period in 2023–24.

Saudi Arabia’s proactive interventionist approach to Sudanese domestic and international affairs is not just about managing regional power axes. Saudi initiated agriculture investments in Sudan to protect its own food security while tactically taking steps to reduce UAE’s influence over the Sudanese government. The interest of both countries diverged with Saudi Arabia giving priority to its national interests that are tied to Saudi Vision 2030 over its alliance with the UAE. Sudan tilts the balance of regional power because of its geo-strategic location between the Red Sea, and East and West Africa—areas that the UAE has been steadily expanding its political and economic influences into.

To exert its influence, Saudi Arabia used its financial clout to encourage creditors, partners of the World Bank, to approve Sudan’s debt relief at the Paris Conference on 17 May. As a result, and in a step that demonstrated Saudi’s deepening influence over Sudan’s new political elite, Hadi Idriss, a member of Sudan’s Sovereign Council and chairman of the SRF, paid a visit to Saudi Arabia in May 2021 where he met with Saudi officials. The outcome of the meetings was an agreement that Sudan and Saudi Arabia will create a joint company to coordinate $3 billion worth of investments in Sudan, and that Saudi will commit to sending relief teams to various regions of Sudan.

Saudi Arabia’s backing of Sudan has encouraged Saudi agriculture companies such as the Rajhi Group to invest further in Sudan. It was reported that its executives held meetings on 17 and 28 June with Minni Minawi, Darfur’s new governor as per the JPA, member of the SRF and head of the Sudan Liberation Movement-Minni Minawi (SLM-MM). Further to that, Minawi’s visit to Saudi Arabia in June was meant to encourage Saudi investments in the war-torn region of Darfur.

With Sudan being admitted to the World Bank’s Heavily Indebted Poor Countries (HIPCs) on 30 June paving the way for substantive debt forgiveness of Sudan’s debts by the international community, which stand at around $60 billion, Saudi’s investments in Sudan are safeguarded for the foreseeable time. That is because the main impediment to Sudan receiving debt relief was the country being included on the US State Sponsor of Terrorism (STT) list that discouraged foreign banks to carry out transactions with Sudan in order to comply with US laws. Sudan being removed sends a signal to foreign banks and companies that doing businesses in Sudan will not result in them facing legal challenges with US authorities.

Based on these developments, both Gibril Ibrahim of the Justice and Equality Movement (JEM)—a signatory armed faction to the JPA—and Minister of Finance and Economic Planning, who is also a leader within the SRF, and Al-Hadi Mohamed, Minister of Investment and International Cooperation, held a joint conference on 9 July with Saudi Arabia’s Sovereign Wealth Fund and 40 Saudi companies in Saudi Arabia. The outcome of the conference is an agreement to open 15 branches of Saudi banks in Sudan and to establish a ministerial committee with the intention to facilitate more investments in Sudan, further encouraging Saudi Arabia to increase its influence in Sudan above the $35 billion invested in Sudan as of 2020, with $26.5 billion previously invested in agriculture alone.

Soft power in the Red Sea

To further its own interest of expanding tourism on the Red Sea coastline to meet its Saudi Vision 2030, Saudi Arabia has doubled down its influence in Sudan, the troubled and conflict ridden Red Sea state, through investments and development projects. Sudan’s 750 kilometre coastline adjacent to Saudi Arabia makes the region and the state prone to Saudi’s domestic and regional interests.

Another intention of the investments is to compete with the UAE over control of the Red Sea port. The competition became more visible since Saudi investors shared a plan to build a new port in Sudan’s Red Sea coast thereby challenging the UAE’s Dubai Port conglomerate to control Red Sea ports leading to the Bab Al-Mandab straits and securing the Gulf of Aden. Both Saudi and the UAE are competing over acquiring ports in the Red Sea region. That is because the UAE has transformed Jabel Ali port into an influential port between the Red Sea and the Indian Ocean.[i] These competitive bids over Red Sea and regional politics through foreign policy interventions are not unique to Sudan. Saudi Arabia is developing deeper ties with Oman through a number of agreements and the opening of a direct 800 kilometre highway between both countries. The highway should allow Saudi Arabia to reduce its dependence on exporting its oil through the Strait of Hormoz, exposing Saudi trade to Iran’s blockades as was previously the case.

The competition over controlling Port Sudan is more likely now than ever before with Saudi Arabia reaching an agreement with Sudan to develop an extensive industrial free zone around the port that includes connecting it to 800,000 hectares of arable area in the southeast near the Atbara river in Sudan.[ii]

Loss of the UAE

It seems that the UAE hast lost its influence over both Lt. General Al-Burhan, the chairman of the SC, and the commander of the Sudanese military and his deputy Lt. General Hemedti who follow Saudi Arabia’s foreign policy direction for now. Sudan’s move to restore its relations with Qatar and improving relations with Turkey this year are a direct response to its tense relations with Saudi Arabia.

This will engender a dramatic change in Sudanese foreign policy caught between oscillating Gulf politics as it was the UAE that engineered the boycott against Qatar. The restoration of relations, especially with Qatar, seemed to have been encouraged as a result of Saudi Arabia ending its boycott with Qatar in January earlier this year. Further proof that the UAE has been losing influence over Sudan is Lt. General Al-Burhan refusing a proposal by the UAE to divide the disputed Fashaga lands with Ethiopia while the border areas are disputed. The UAE tabled a proposal of dividing the Fashaga lands as 40% for Sudan, 40% for UAE, and 20% for Ethiopia as part of the initiative to end border clashes between Sudan and Ethiopia. Al-Burhan’s decisions are domestically motivated as well; his fear of plummeting popular credibility will undermine his plans to undo Sudan’s transition to democracy, starting border clashes with Ethiopia that he cannot win, all in support of his own presidential ambitions.

[i]Author phone interview with an opponent to the former Bashir regime, 22 July 2021.

Burundi: How different is President Ndayishimiye?

Jihad Mashamoun is a Political Analyst on Sudanese Affairs. A holder of a doctoral degree in Middle East Politics from the Institute of Arab and Islamic Studies, University of Exeter, he has authored and co-authored numerous articles on the Sudanese uprisings and Sudanese affairs. He has provided expert interviews on Sudan for both radio and print. Follow him on Twitter @ComradeJihad.