For those affected by the devastating drug trial, vaccine hesitancy is not only driven by conspiracy theories or mistrust but lived experience. 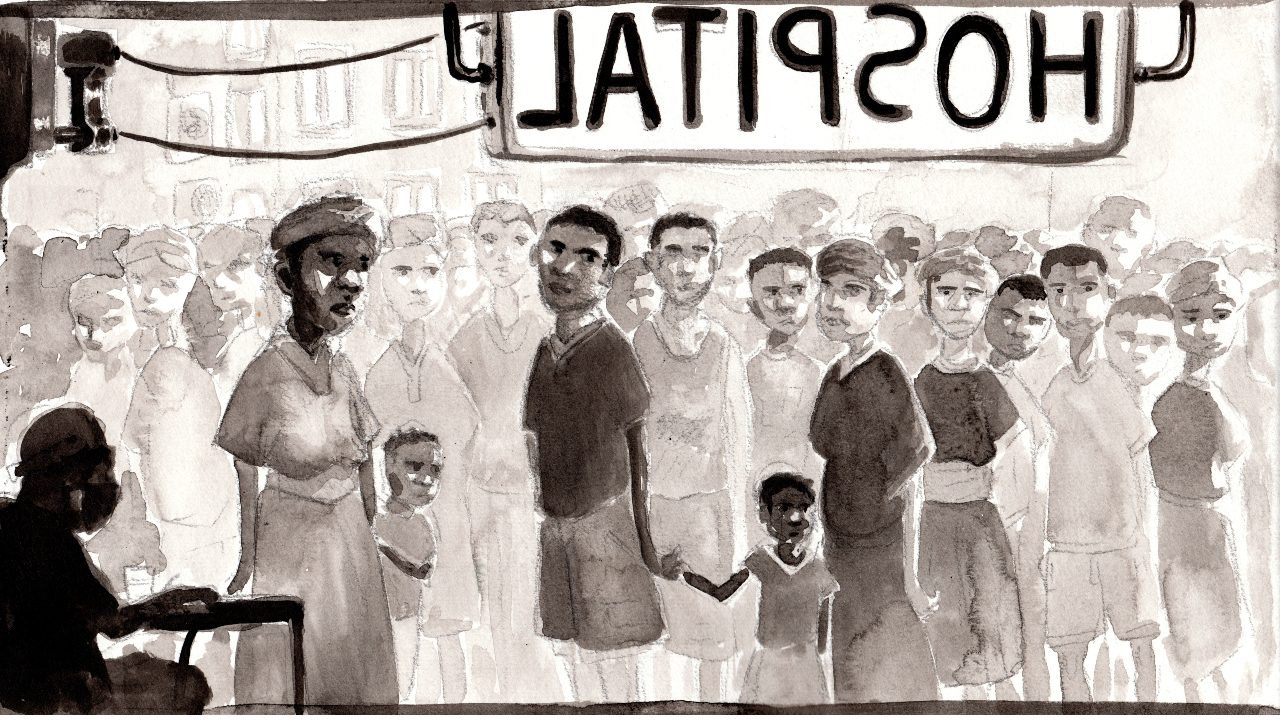 A version of this piece, edited by Mercy Abang, was originally published by Unbias The News.

“It’s strange that I still remember everything, even the colour of the nurse’s uniform. There was a white nurse who was in a brown skirt and green blouse, who directed the Nigerian nurse to give him three injections at a time and he did exactly that while my son was on my shoulders,” says Hajiya Maryam*, speaking in Hausa.

“Immediately after receiving the drugs, he became unconscious for hours. On waking up, I noticed that he couldn’t hear anything again. I knew that it was Pfizer who gave him the drugs.”

Maryam’s son, Zakari, was six at the time and ill with fever and headache. She had thought he had meningitis. She took him to Asibitin Zana, a clinic in Kano, where he was treated with drugs. The drugs, part of a Pfizer trial, left Zakari with a hearing and speech impediment. Maryam insists no one told her that Pfizer was testing out a new drug.

The aftermath of Pfizer’s drug trial in 1996 is linked to the current COVID-19 vaccination boycott in communities within Kano State. Here, vaccine hesitancy is not only driven by conspiracy theories or mistrust in science but lived experience.

Drug trials during an outbreak

In 1996, a severe meningitis outbreak spread through Nigeria, causing inflammation of the brain and spinal cord linings. By March of that year, the infection had spread to 12 states, leading to over 100,000 cases with a fatality rate of 10.7%. It was the most severe epidemic of the illness ever recorded in Nigeria.

The outbreak, which lasted over three months, required the combined efforts of a National Task Force, the World Health Organisation (WHO), UNICEF, UN Development Programme (UNDP), Médecins Sans Frontières, the International Red Cross and several other NGOs to bring the epidemic under control, but not without scars left behind for families in Kano State.

In addition to the international task force, the US-based pharmaceutical company Pfizer was in Kano at the time with an antibiotic drug called Trovan, expected to potentially treat meningitis, but not yet approved for that use or for treatment of children by the US Food and Drug Administration (FDA). The company administered a drug trial of Trovan and a second drug, Ceftriaxone, then a standard treatment for meningitis, to some 200 children.

Pfizer has maintained that they obtained prior verbal consent from all parents for the experiment, but those like Maryam and 29-year-old Bala Bello tell a different story. Bello was four-years-old during the meningitis outbreak.

“I was ill and taken to the Infectious Diseases Hospital (IDH), popularly known as ‘Asibitin Zana’,” Bello recounted. “I was given some drugs, which no one explained to [my mum] what the said drugs were meant for.”

Shortly after the drugs had been administered, he developed an unexpected side effect.

“We didn’t even leave the hospital before a reaction manifested. Soon after, I developed paralysis in my legs,” Bello says while struggling to maintain a stable sitting position. “Soon after I was paralysed…my mother got to know that it was Pfizer who had given her the drugs from their experiment.”

Of the trial participants, 11 died and dozens of others were left with debilitating injuries: blindness, paralysis, deafness, and neurological deficits, which the company maintains are the result of meningitis, not the drugs they administered. (Pfizer did not respond to multiple requests for comment for this story.)

In 1998, the license for Trovan for use by adults was withdrawn from the European Medical Agency because of concerns over serious medical problems and multiple deaths. It was withdrawn from the US market in 1999 for the same reasons, though at the time Pfizer said trials had revealed no side effects. It appears results from the trial in Kano State were never published.

In 2007, the Nigerian federal government and Kano State government filed criminal and civil suits against Pfizer and eight other defendants, asking for $7 billion in damages. The suit charged that the company had tested an unapproved and experimental drug on children with neither informed consent from parents nor approval from the Nigerian government. Pfizer countered that such approval wasn’t necessary. In 2001, an investigation by the Washington Post had uncovered that a document Pfizer claimed to prove ethical approval by Nigerian authorities for the trial appeared to be falsified and back-dated.

In 2009, Pfizer and Kano State officials, along with representatives of the children’s families, agreed a confidential out-of-court settlement for $75 million. This conclusion led to compensation for some of the families affected, but Pfizer never admitted to wrongdoing and maintains to this day that the trial was proper and life-saving.

A legacy of scepticism

Many years later, the memory of the Trovan drug trial remains. The COVID-19 vaccine recalls doubts over the ethics of big pharmaceutical companies.

“I won’t advise, I won’t allow and I won’t tolerate seeing my son, myself or any of my relatives to receive the COVID-19 vaccine,” Maryam maintains. She vows to discourage anyone she knows from taking the vaccine and inform them about the 1996 meningitis outbreak. “I will educate them on that. My son is now living in agony despite the so-called compensation…He is neither in school nor into business. He is living a miserable life.”

Maryam is not alone in her doubts. From Congo to Malawi and South Sudan, doses of the expired vaccines have been destroyed, a development that raises concerns for vaccine equity and the effectiveness of a global vaccination effort that requires mass participation to be effective.

Dr Samaila Suleiman, a lecturer of History at the Bayero University Kano, argues that scepticism over the COVID-19 vaccine can be traced to historical cynicism against the motives of Western powers in Africa.

“As public health experts, we must do more than offer the vaccine,” says  Dr Faisal Shuaib, head of the Nigerian National Primary Healthcare Development Agency. “We have to also put in the hard work of providing the correct information about the safety, effectiveness of vaccines and clear the doubts and misconceptions that exist.”

These doubts may be difficult to disprove when pharmaceutical companies remain unrepentant for previous actions, settling disputes with out-of-court payments cloaked in secrecy. However, countries can take measures to hold them to account. In Uganda, the high court recently set out guidelines for obtaining informed consent from the subjects of human clinical drug trials in the case of Mukoda v International AIDS Vaccine Initiative.

As health advocates struggle to fight disinformation and conspiracy theories about the COVID-19 vaccines, it is important to remember that in some countries distrust stems not only from ignorance but experience.

Unbias The News is a feminist, all-women crossborder newsroom by Hostwriter, seeking to actively fight against the perpetuation of racist, sexist, or ableist stereotypes.