Even as Ghana clamps down on queer lives, Angel Maxine remains defiant. 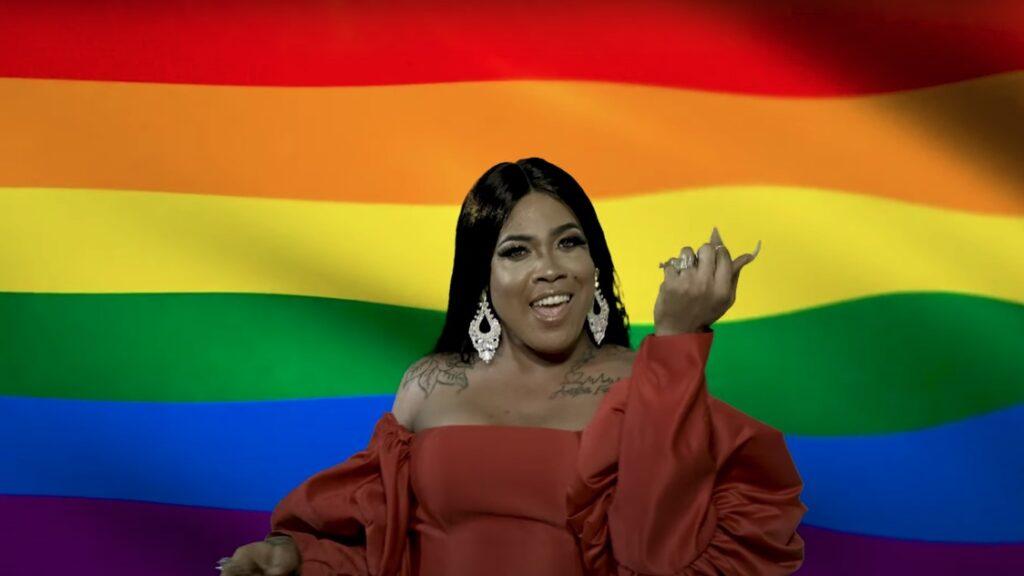 In a short video shared on Instagram in October 2020, we see singer Angel Maxine in her element. Wearing a leopard-print jacket, fishnet stockings, and high heels, she holds a microphone in one hand and a fan in the other as she whines on a man. She is singing Sweetness, her song about a woman offering thrilling sex in return for being treated right. This is Angel as she has long wanted to be: a woman and a musician having a good time doing what she loves.

Getting to this point has not been easy for the woman often referred to as “Ghana’s first openly transgender musician”. Homophobia is widespread in the country, as this year has made all too clear. This January, for instance, the police closed down the premises of LGBT+ Rights Ghana, an office and community centre for queer Ghanaians. In March, a youth group teamed up with police to arrest 14 people at a gathering alleged to be a “lesbian wedding” but which attendees say was a birthday party. And the following month, police detained 21 queer rights advocates at a conference and kept them in custody for over three weeks.

Perhaps most alarmingly, lawmakers introduced a bill to parliament this August that promotes conversion therapy and aims to criminalise the promotion, advocacy, funding, and act of homosexuality in all its forms. As it was filed, the Speaker of Parliament remarked that the “LGBT+ pandemic” is “worse than Covid-19” and that it “must be fought by all of us”.

Angel, 36, who was born Maxwell Okyere Opoku, has not just had to deal with state-driven hatred during her life but has been outspoken against it at times. For example, she responded to the closure of the LGBT+ Rights Ghana offices and the wave of homophobia it ignited by releasing Wo Fie with Wanlov and Sister Deborah. The song’s title comes from the Akan phrase Ebi wɔ wo fie, which translates as “the same thing is in your home” and exhorts a person to not be judgmental or hypocritical.

In many ways, however, Angel’s greatest act of defiance has been to be herself.

Angel grew up in the coastal city of Tema, the child of a reverend and prophetess. Her home was both deeply religious and musical, and she took to singing at an early age.

“We had a church at home and everybody in the community used to come,” she says. “I was the choir mistress. I used to learn the songs, then I’d come and teach the choir.”

As a teenager, she decided to pursue her passion further. In 2001, she successfully tracked down Shegah, one-third of the popular all-girl trio Triple M, via the group’s manager. She met the popstar and ended up being introduced to her bandmates.

“I followed them around until they welcomed me into their fold,” Angel recalls. “I was like an unofficial member of the larger group. They treated me with love. I learned a lot of things from them, and that built my confidence to pursue music.”

Angel played a few shows and wrote songs exploring war, life, sex, teenage love, men, and the self. Yet after a year of struggling to find a label, she gave up.

At university, she decided to try again. This time, she took on the stage name Sexy Lagazee and performed as a woman in skimpy clothes. With this persona, Angel became popular not just on campus but in the wider city of Koforidua. Her mother, however, was dismayed. She prayed for her deliverance from queer “affliction” at numerous churches including T.B. Joshua’s megachurch in Nigeria.

Angel felt that many who attended her shows were similarly disapproving. “I just wanted to wear something skinny, something sexy, all the time. And so I’d do that and when I got to the venue or on stage, all these almighty straight people wanted to devour me,” she says. “They didn’t like me for the way I appeared, and yet they showed up at my shows all the time to see my outfit, my dance moves. They would enjoy it, and still insult me.”

In 2011, Angel gave up performing, having failed to secure an agent or record label. But her time as Sexy Lagazee had left its mark as a significant stage in her transitioning journey. It was shortly after this period that she stopped being Maxwell and started to refer to herself as Angel Maxine. “As I was doing the music, dressing, appearing on stage, and performing like a woman, these things informed my decision to fully transition. I just felt that if I am coming out to people, on the music stage, as a woman, why didn’t I do it well, truly and fully?” says Angel.

Having stopped performing, Angel instead wrote for other musicians and sang backing vocals. Some of the songs she wrote became popular but Angel says she received neither remuneration nor credit. The artists who performed her songs had promised to record Angel’s music and support her career in return, but this never happened.

“I helped some musicians and they never returned the favour. I’ve even served in people’s homes, cleaning, washing, babysitting and all sorts of things. They used me and never helped me,” she says. “The whole time I was just hoping that following them around could give me the chance to meet people who would help me in the music industry, but they rarely ever took me along when they went out to shows and events. They left me behind to take care of the house and children.”

Angel’s music received little attention at this time, but various media outlets in Ghana became fixated on her gender identity as a spectacle. This was in keeping with the popular press’ typical treatment of queer people, according to Accra-based feminist activist and researcher Rita Nketiah.

“Mainstream media acquiesce to the status quo,” she says. “They’re said to represent or be the voice of the people…and so whether or not it’s their personal feeling that being LGBT+ is bad or sinful, or that there’s a LGBT+ agenda, or that it’s cultish or whatever, they know who their listeners are.”

Angel took another break from music, full of self-doubt. She trained as a chef and ran a culinary service, catering for parties, weddings, and funerals. In 2016, she started to transition. This was the one time in her life where she had the most clarity on her gender identity.

“At this time, I had read and understood what being a transgender means. And by 2017, I wholly accepted that I am a trans woman, fully transitioned.”

Not long after, she heard from a long-time acquaintance, Kwaku Sent One, currently her manager, who called to tell her that the popular radio station Okay FM wanted an interview.

The request tormented her.

“I couldn’t sleep at night,” she says. “I was so scared because I knew that what I was putting myself into was irreversible, that this thing was going to change my whole life. [It was] going to drive people away from me, cost me my job, my apartment, everything.”

In the end, she decided it was worth it. One late afternoon in November, she went into the Okay FM studio to tell the world who she now was: Angel Maxine, a transgender musician. The after-effects were immediate. Her culinary business lost clients and Angel became afraid to move around freely for fear of being attacked. But she did not regret her coming out publicly.

“The risk was worth it because I’ve gained back my self-esteem,” she says. “I used to be a very timid pushover. But now, no one dares. I’m now myself. I am me, and I don’t give a damn anymore.”

This time, her mother, Araba Forson, was full of pride. Her prayers years before had been answered, but not in the way she had expected.

“I was stressed a lot. I did countless days of dry fasting at different times. They said it’s demonic,” she says of her initial reaction to Angel’s gender fluidity. “[But] when I prayed, God told me he created my child in His own image…That’s what God told me, and ever since, I never judged Angel. I never condemned my child. I accepted and loved her. I regretted listening to people.”

In preparation for Angel’s interview, Forson made her a special dress and gave her full blessing. “She said ‘yes, finally, you can be yourself. Leave the world to talk. Go and do your thing’,” recalls Angel.

In the Okay FM interview, she spoke of her mother’s allyship and how it had inspired her to add “Angel” to her new name Maxine, which she had changed from her given name Maxwell. “She had been calling me her angel for the longest time, even before I became Maxine,” she said.

Today, Angel has re-committed to her music and is working on her debut album, which is scheduled for release by the end of the year. Her best-known single is “Wo Fie” and she is still much better known for being Ghana’s first openly transgender musician than for her music, but she says the songs aren’t going to be all about being queer.

“The only thing the album is going to be all about is love,” she says. “Essentially, I’m giving listeners love on the album, but they should know… that this love also means that a man can love a man, and a woman can also love a woman.”

Correction: A previous version of this article erroneously stated Angel Maxine’s age as 37. She is 36. Also, the article said King Luu, a Ghanaian entertainer, was her manager and called her about an interview at Okay FM. Her manager’s name is Kwaku State One and it was he who arranged the interview. The error is regretted.

We stand with Sudan’s people and demand ...

moshood lives in Accra, Ghana. He's been published in a number of publications, both online and in print. These days, he is learning to photograph.