For the past 132 years, thousands have gathered in Lamu annually for Quran-reciting competitions, dance, music, and free healthcare. 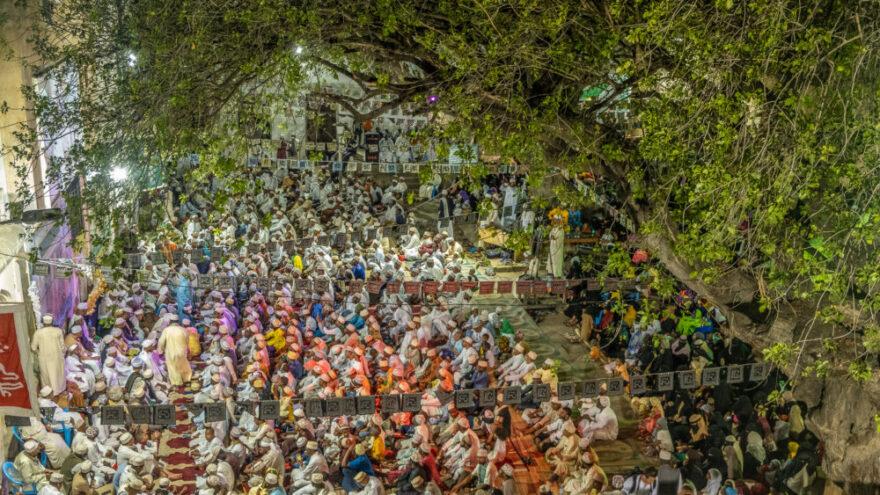 Men congregate on the public square in Lamu’s Old Town during the grand recitation of Mawlid. Credit: Jaclynn Ashly.

Earlier this month, thousands of pilgrims across East Africa and beyond ventured to the small Kenyan island of Lamu. They gathered for Mawlid (or Eid Milad-un-Nabi), celebrated as the birthday of the Prophet Muhammed.

Mawlid festivities on the island have been organised for the past 132 years by the Riyadha Mosque and Islamic Centre. The mosque’s founder Habib Salih (commonly referred to as Habib Swaleh) was a beloved Muslim educator. He adopted the celebrations as part of his mission to spread Islamic knowledge throughout East Africa and to rectify social inequalities in Lamu.

Swaleh is famous for revolutionising Islamic education and making it accessible to all sectors of society, while using the teachings to unite the populations through the celebration of diversity and culture. His teachings spread from Somalia to Mozambique and remain an influential source of culture in the region. The responsibilities of maintaining these traditions at Riyadha Mosque, including Mawlid, have been passed down through Swaleh’s immediate bloodline.

The week-long festivities in Lamu incorporate various parts of the island’s unique centuries-old Swahili culture, including racing competitions with donkeys and dhows, with swimming and Quranic recitation competitions. This year, the first documentary produced on the life of Swaleh, created by 31-year-old filmmaker and Lamu native Omar Kibulanga, was also shown. 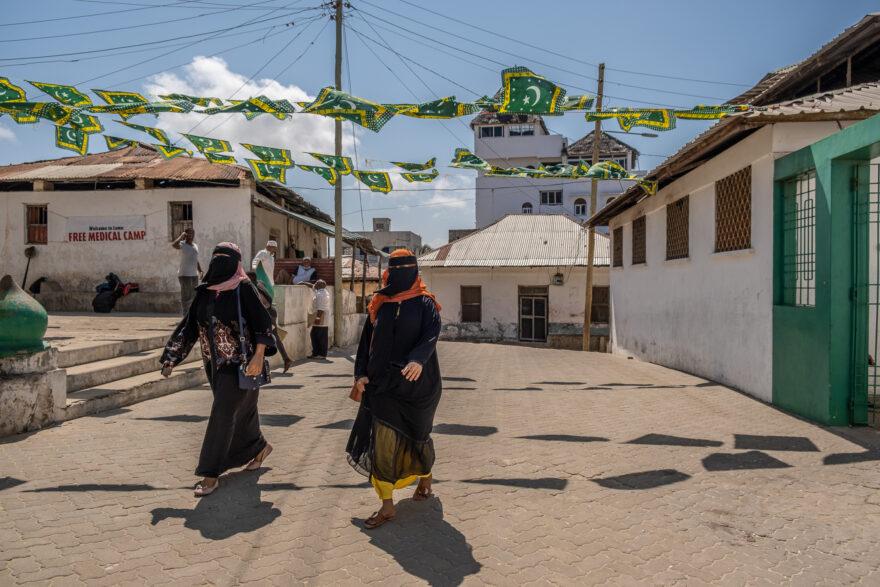 According to the Riyadha Mosque, around 5,000-6,000 pilgrims – including from Morocco, Comoros, Tanzania, and Uganda – arrived on Lamu for Mawlid this year. The number is usually around 30,000, but COVID-19 restrictions meant there were many fewer participants.

Before Swaleh’s education programmes, “there were deep inequalities among the inhabitants of Lamu,” says Abubaker Badawy, spokesperson of Riyadha Mosque and great grandson of Swaleh. “There were the haves and have-nots, the slaves and ex-slaves, and the masters.”

“[Swaleh] used Islam to equalise the people of Lamu,” he continues. “Everything he did was about trying to get people to respect each other and come together. [In Lamu] religiously the inhabitants were Muslims. But there was no element of Islam in them. They were neglecting the fundamental teachings of Islam. Swaleh changed that by propagating Islamic scholarship among various people and communities from all different walks of life, whether rich or poor.” 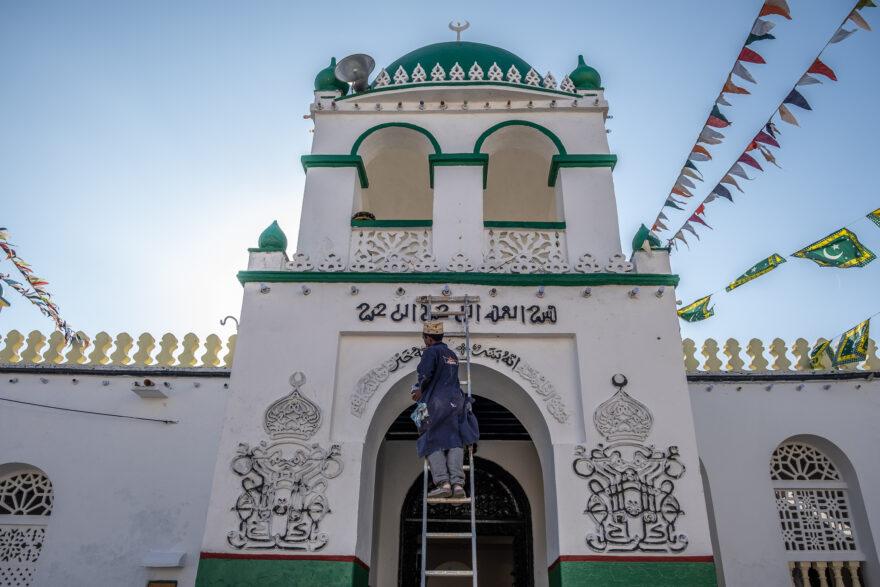 A young man touches up the paint on the famous Riyadha Mosque.

The island of Lamu has become famous for Mawlid festivities, which attract thousands of Muslims around East Africa and the world to share knowledge, culture, and collectively express their love for the Prophet Muhammed.

Mawlid was historically observed within individual households in East Africa. But Swaleh spearheaded the beginnings of what would become the world-renowned festival on Lamu. The festivities took Mawlid celebrations from private homes and transformed them into mass public gatherings. This was symbolic of Swaleh’s larger mission of taking Islamic education from the confines of individual scholars and families and spreading it among the masses. 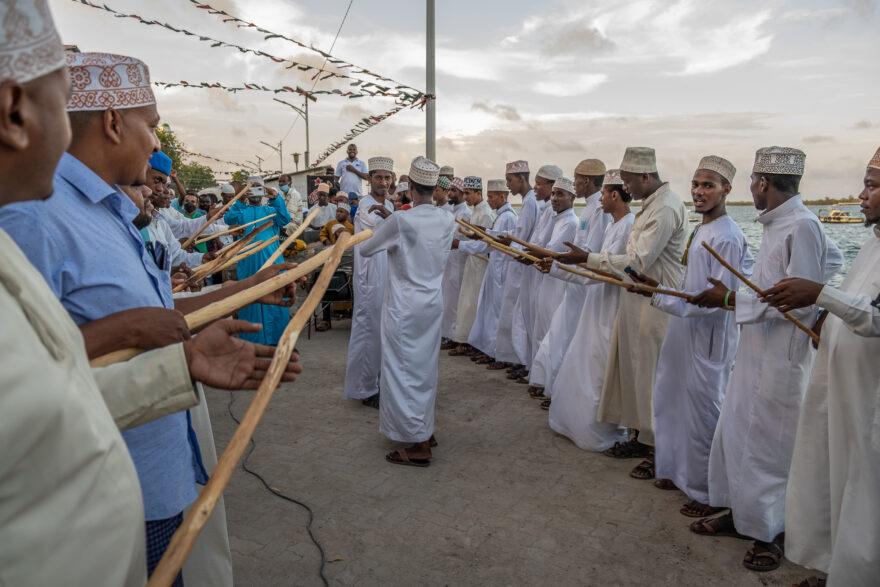 Swaleh used Mawlid festivities to unite people through Islam and celebrate diversity. According to Badawy, Swaleh would invite surrounding tribes to Riyadha to celebrate their traditional dances during the festival, a custom that continues today.

Badawy says that when groups in the area come into conflict, the Riyadha Mosque has been able to assist with resolutions when the government has failed, owing to the deep respect and connections Muslims throughout Lamu have for the teachings of Swaleh. 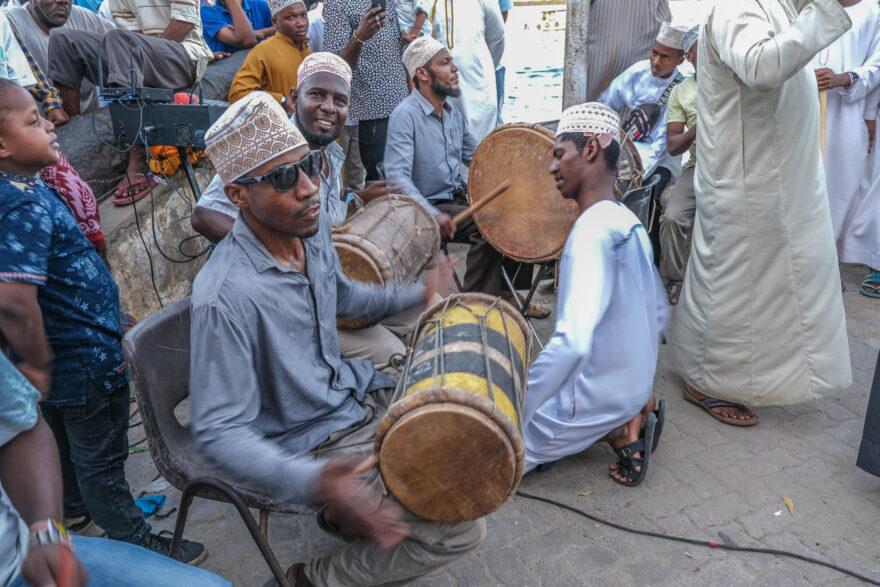 Musicians on the streets.

Throughout festivities, traditional instruments are played by both women and men. However, women only play within private spaces or at women-only public events, while the men take over public streets. Traditional Swahili poetry is also showcased on the seaside. According to Ali Salim Mwenye, a local historian, most musicians and poets come from beyond Lamu. 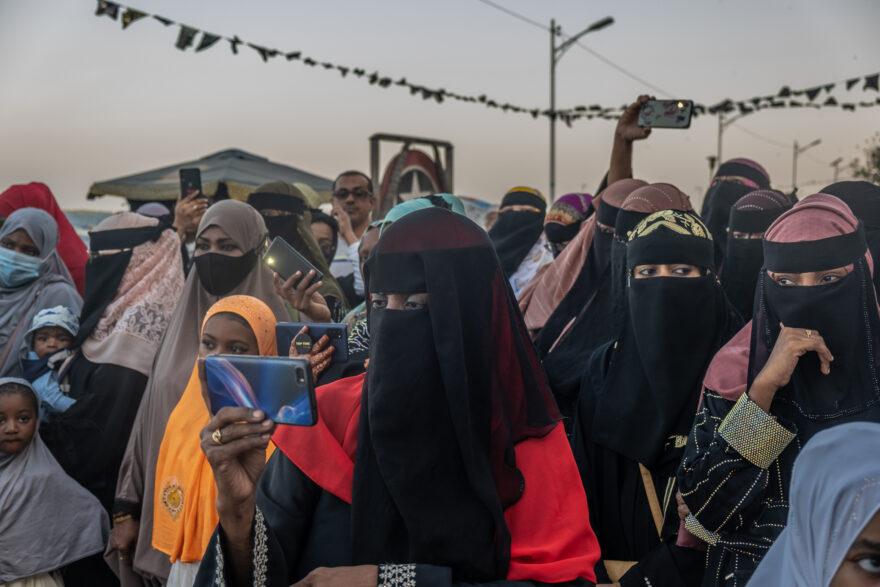 Women stand to the side to watch, take photos, and film the traditional dancing and singing at the seaside. 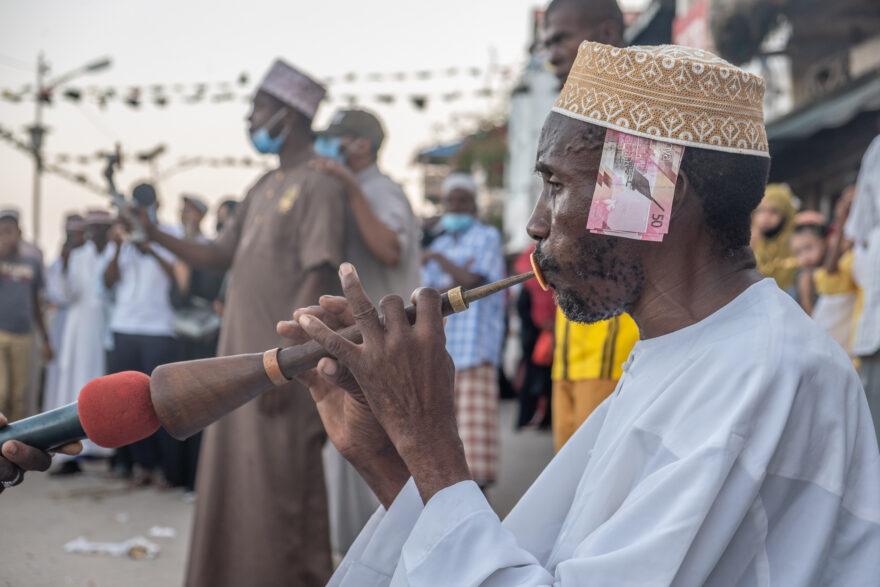 Dancers, singers, and musicians are often awarded with money slipped into their hats called kofia, traditionally worn by men along the Swahili coast.

According to Badawy, there has been growing concern around the rise of Salafism in Lamu, an Islamic movement that believes the most authentic Islam is found in the practices of the early Muslims and which reject innovative Islamic celebrations like Mawlid.

Salafism has a “small influence in Lamu” he says. “But it has definitely still affected things. They are not insignificant.” Badawy believes the Islamic teaching of tolerance is the best way to handle the conflict. “This isn’t a religious issue as much as it is a social and political issue. We have logical and strong arguments for conducting Mawlid and the Salafis also have their own grounds to be opposed to it,” Badawy says. “We need to just be tolerant of each other.” A boy recites the Quran in front of his elders.

During Mawlid, Quranic recitation competitions are held among young boys and girls for a small cash prize. According to locals, this competition gives the children an incentive to memorise the Quran. 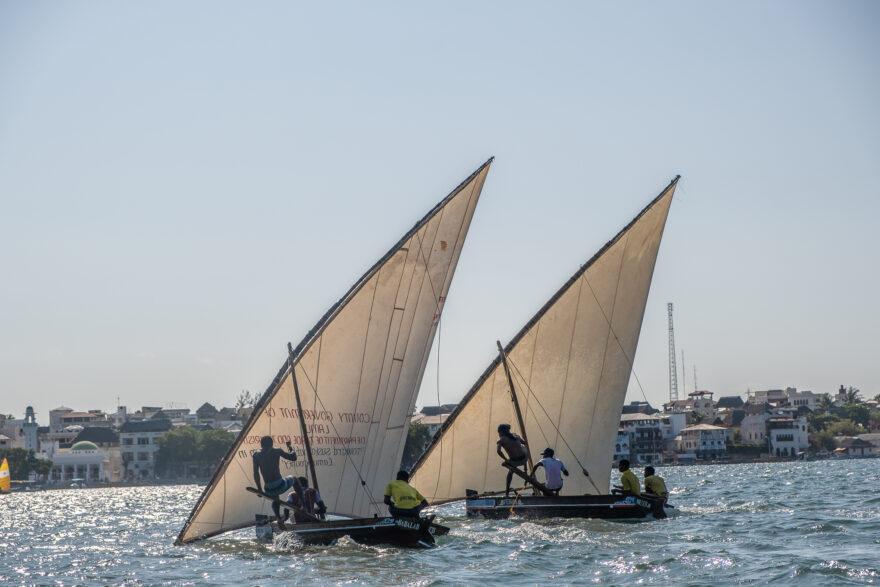 A dhow race in progress.

Dhow races are also organised. Money is collected among the bystanders and the winner receives the cash. This competition has become all the more important with the establishment of Lamu port, which officially opened this year. The dhow has remained an important part of the island’s landscape largely due to tourism, with locals bringing visitors snorkelling or for sunset views on the traditional boat. 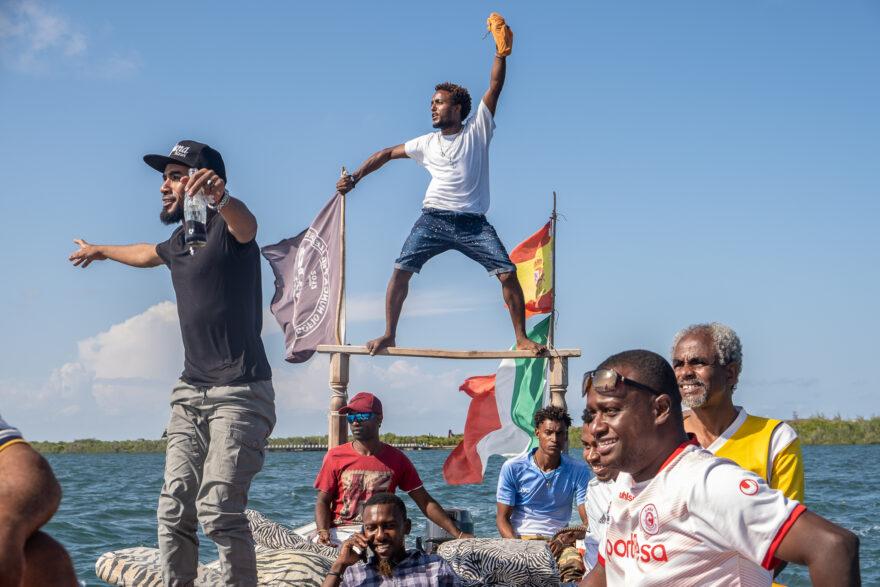 Men cheer on their friend as they follow in a boat.

During Lamu port’s construction, which involved dredging the ocean floor, coral reefs were destroyed, while locals say the number of sea turtles has dramatically decreased and snorkelling is no longer possible around the port. As tourism suffers, the demand for dhows has also waned, putting the intergenerational tradition of dhow-making in jeopardy. 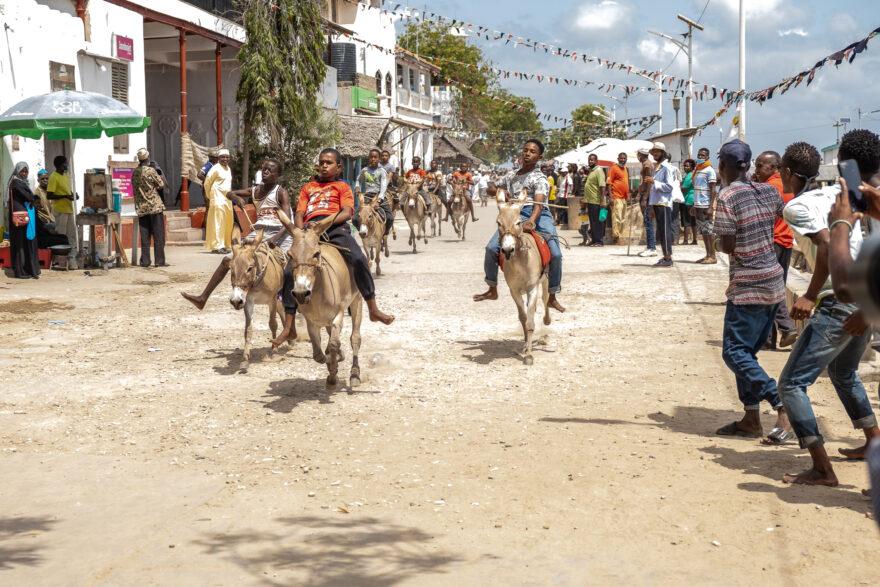 Donkeys are a staple of the unique landscape in Lamu’s Old Town, with donkeys the only permitted transportation through the town’s narrow streets. They are raced during Mawlid and locals say some donkeys are only used for racing and preparing for competitions.

Mohammed Saed, in the centre of the photo above, concentrates as he takes the lead. The 13-year-old has competed six times during Mawlid and says he has won twice before. “I love riding donkeys,” he tells African Arguments. “It’s my passion.” 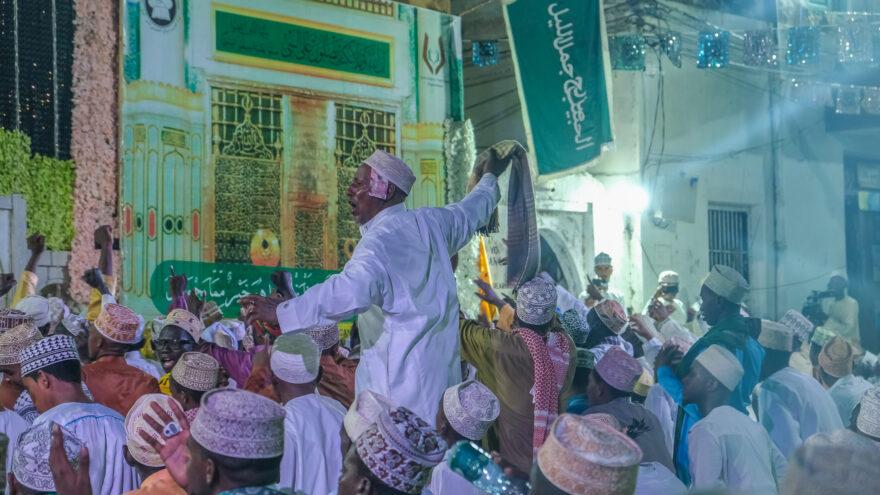 Men congregate on the public square in Lamu’s Old Town during the grand recitation of Mawlid.

Since 2016, two simultaneous celebrations have been organised – by Riyadha Mosque and Habib Swaleh Islamic Institute. One was held in public spaces [pictured], the other in mosque grounds. Other, smaller Mawlids are observed in private homes. Participants use their remaining energy swimming to the dock during the annual Mawlid swimming competition. Women sell homemade food. Each year, women on Lamu island raise funds to pay for the school fees and other needs of orphans and disadvantaged children and families in the area.

During Mawlid, women also have women-only celebrations. These parts of Mawlid are strictly for women, with Shariffa Abubakr, the main organiser of one of the events, getting on the microphone and telling all the men to “get out” before celebrations commence. Women dance vugo, a traditional Swahili dance, play traditional instruments, such as drums and cow horns, and recite qasida, or traditional Islamic poetry. Photography is strictly prohibited. During Mawlid, families apply black makeup, which also usually consists of blackened and thickened eyebrows with a dot in the centre, on their small children. 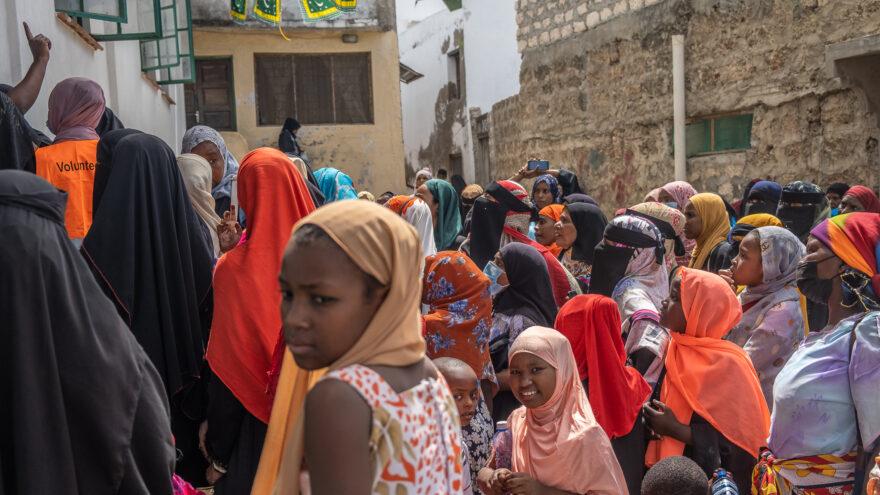 Dozens of women stand outside the entrance of the free medical camp at Riyadha Mosque, awaiting treatment for themselves and their children.

For nearly 20 years, the mosque has offered free medical services to disadvantaged residents and visitors during Mawlid. Badawy conceived of the idea, following in the footsteps of Swaleh who offered traditional medicine at Riyadha more than a century ago. Doctors come from various Kenyan cities to volunteer their services, while Riyadha provides them food, transport, and accommodation. Sabbir Ahsan, 33, removes a tooth from a young girl.

Classrooms in Riyadha Mosque are converted for medical services, such as primary, dental, eye care, cancer screening, and dermatology. Ahsan, a dentist from Nairobi, says this year was the fifth time he has volunteered his services during Mawlid. “In Islam we are supposed to help each other,” Ahsan says. “We are following the example of the Prophet Muhammed when we help the poor and needy of Lamu.” A group of men sit and pray beside the grave of Swaleh. The site is considered a sacred place in Lamu. Residents say that if you pray here, any wish you make will come true. A group of young girls, dressed in their best outfits, await the procession of worshippers who will pass the seafront from Swaleh’s grave back to Riyadha Mosque. Celebrations after the procession.

Groups from various parts of the region show off their unique traditional Swahili songs and dances following the procession from Swaleh’s grave. Young men dance and jump around, falling onto one another, as each group represents their culture as loudly as possible. Several times, an elder on the microphone jokingly yells: “Security! Please remove these youths!” Mawlid recitations inside a private residence in Lamu Town on the Friday following the grand recitation. This is exemplary of how the day was observed before the mass celebration initiated almost 150 years ago.

Mawlid celebrations have spread far beyond Lamu. During his lifetime, Swaleh encouraged other communities to replicate festivities in their own communities, predicting people would face increasing difficulties traveling to Lamu. 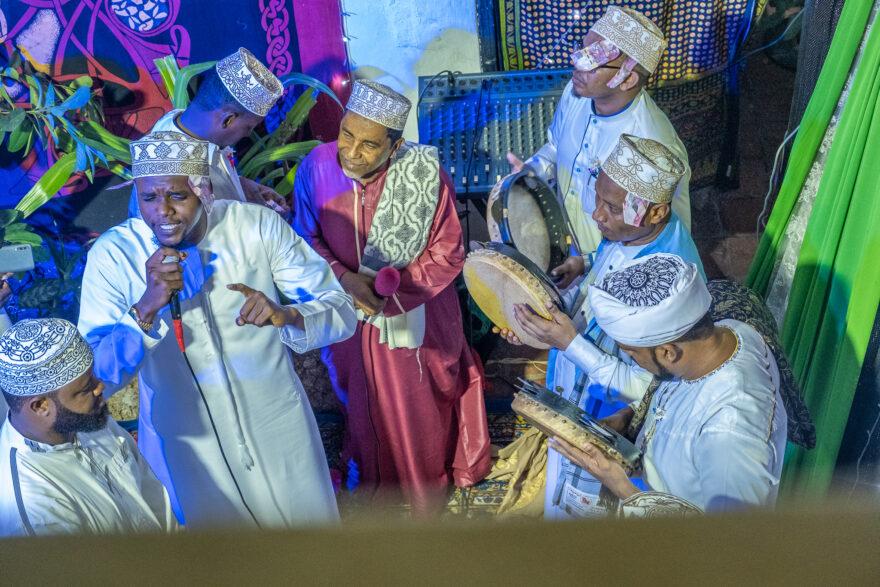 Ali Sajjad Shariff [holding the mic] participates in Mawlid recitations in a private residence, whose residents welcomed everyone on the street to attend.

Shariff, 30, is the great great grandson of Swaleh. He tells African Arguments that the central mission of Swaleh’s life was to “spread the knowledge of Islam to everyone”. The Mawlid celebration is a central practice to remind Swaleh’s followers and admirers of the importance of spreading the knowledge of Islam freely and to accept and celebrate the diversity of mankind.

All photos by Jaclynn Ashly.

Gambia: The seat-warmer, the forever runner-up, and ...

“This Is Not a Coup”: International Failure ...

Jaclynn Ashly is a freelance journalist.