Saving lives and broken hearts with breast milk in Uganda

Breast milk donations can mean life or death for newborns, but safety misconceptions and stigma hamper their lifesaving potential. 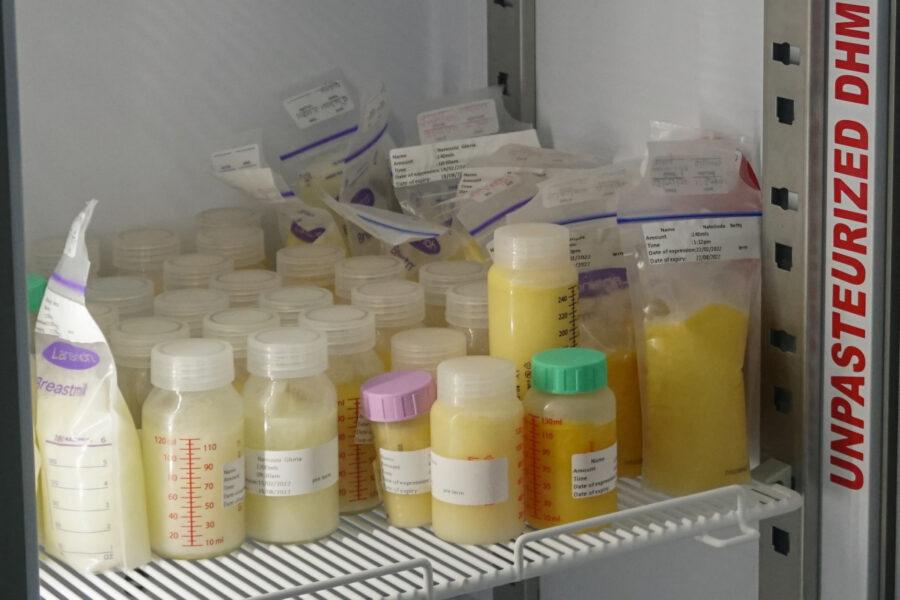 Even before she gave birth, Tracy Ahumuza knew that her daughter’s first few days were going to be difficult. Five months into her pregnancy, a prenatal ultrasound had revealed that the foetus had omphalocele, a birth defect in which organs such as intestines exit the abdomen through a hole near the belly button.

She delivered a baby girl, Alyssa Taha, in July 2021. After the surgery, doctors told Ahumuza that Alyssa could only consume breast milk. Ahumuza couldn’t produce any. She needed to find a donor quickly — but she couldn’t. Alyssa died of starvation three days later.

A hospital in Kampala wants to avoid such cases. It has launched Uganda’s first milk bank to help babies whose mothers can’t produce milk immediately after delivery. The effort is part of a broader push to ensure everyone can access safe breast milk. But the project, which began in November at St Francis Hospital Nsambya, has been slow to take off because of misconceptions about the safety of donated milk.

Dr Victoria Nakibuuka, a neonatologist at St Francis Hospital Nsambya, says several factors can delay lactation. “A mother can fail to produce milk after delivering a premature baby, or due to stress and diseases like diabetes,” she says. “Sometimes after a caesarean delivery, mothers would stay two to three days without producing milk.”

Ahumuza says she knew that her milk could be delayed because of the scheduled caesarean delivery, so she bought baby formula, which is available mostly in urban areas. Uganda hasn’t experienced the formula shortages seen in the US. Even so, formula is too expensive for many families and often not an option.

Due to her special situation, though, doctors told Ahumuza she needed breast milk. And no donor programme existed. “If the hospital had told me that breast milk was the only food my baby would need after the operation, she would probably be alive today,” says Ahumuza.

In 2019, Ugandan researchers conducted a neonatal mortality study with data from 2001, 2006, 2011 and 2016. The study, funded by the United States Agency for International Development, found that in the most recent three years, the neonatal death rate was up to 3.3 times higher in babies who were not fed breast milk immediately after birth.

Nakibuuka says breast milk is especially important for at-risk babies. “Nine out of 10 preterm babies will survive when exclusively fed breast milk,” she says. “We noticed that the survival rate, which was at 75%, gradually improved to 94% because of breast milk.”

Nakibuuka, who leads the breast milk bank project, says the idea originated in 2015, when a baby survived on pasteurised milk from a donor. “I saw medical staff’s attitudes change, despite their initial hesitation,” she says.

Encouraged by what they had witnessed, Nakibuuka says the hospital began facilitating milk donations. But that was not sustainable, so they established the milk bank. Between 2015 and 2020, they raised 400 million Ugandan shillings (about $110,000) from private donors. More than six months in, it’s still struggling to make any significant impact. It has so far benefited 10 babies and had only 22 donors.

Dr Jessica Nsungwa Sabitti, the commissioner for maternal and child health at the Ministry of Health, says that in a society where sharing breast milk is not the norm, mothers must be reassured that it’s safe. “We want people to trust the system,” she says. “That means combating myths that a child fed on breast milk from a donor could get sick or inherit traits from someone whose history they don’t know.”

Sabitti says donors are screened for HIV, syphilis, hepatitis and other communicable diseases. The collection occurs at the hospital, where the milk is pasteurised, packaged and stored. The government is working to create a policy that would formalise the process, she says, and to facilitate information sharing.

“We already have a programme called FamilyConnect, where mothers register to receive [text messages] tailored to them,” Sabitti says. “We can improve that to include breastfeeding messages.”

Denise Kekimuri, a counsellor at Vessel is Me, an organisation that helps grieving mothers cope with loss, says doctors should also encourage mothers who have lost babies to donate their milk instead of suppressing it.

“Giving milk is therapeutic for a mother who has lost a child because it makes her feel purposeful,” Kekimuri says. “I hope more mothers can embrace the culture of milk sharing because it’s so important.”

Ahumuza agrees. A few days after her baby died, she began lactating. She immediately thought about donating her milk. “I wanted to help save another baby’s life and a mother from grief,” she says.

She called various hospitals, but no one would take her milk. Instead, her doctor gave her medicine to suppress it. But she was determined to save other mothers from enduring what she had gone through.

Soon after Alyssa’s death, Ahumuza started the ATTA Breastmilk Community, a non-profit that encourages mothers to donate milk. She operates it out of her home. “We make the process so easy for the mothers because we visit their homes and explain it to them,” says Ahumuza.

The non-profit screens donors, then provides storage bags. When the milk is ready, workers pick it up and deliver it in coolers to Ahumuza’s house, where it is pasteurised and stored. So far, the group has collected more than 100 litres of breast milk from more than 20 donors, Ahumuza says. She supplies most of the milk to the neonatal unit at Mbale Hospital, 225km from Kampala.

When Patience Kemigisha’s twins were born, she couldn’t produce milk immediately. Her husband drove 15km one way, twice a day, to pick up breast milk at Ahumuza’s home. “If not for the ATTA community, my twins would have died,” Kemigisha says. “What she does is invaluable.”

Sabitti, the Ministry of Health official, says that the government is learning a lot from Ahumuza about building capacity and the standards required at the policy level.

“We are trying to establish if it’s better to have these banks at big hospitals, or also have outlets to make it convenient for donors,” Sabitti says. “We need role models like her working at the community level to educate mothers.”

Ahumuza hopes to provide equitable access to breast milk, so mothers won’t have to go through a long process to donate or receive milk. She supports milk banks but says the community aspect, where mothers maintain friendships, is important.

“Seeing some of these babies growing up and thriving,” she says, “makes me happy.”

Patricia Lindrio is a Global Press Journal reporter based in Kampala, Uganda. She specialises in health and migration reporting.