The most severe drought for 40 years, war in Ukraine, and poor governance have led Somalia to the brink. Aid raised is a fraction of what’s needed. 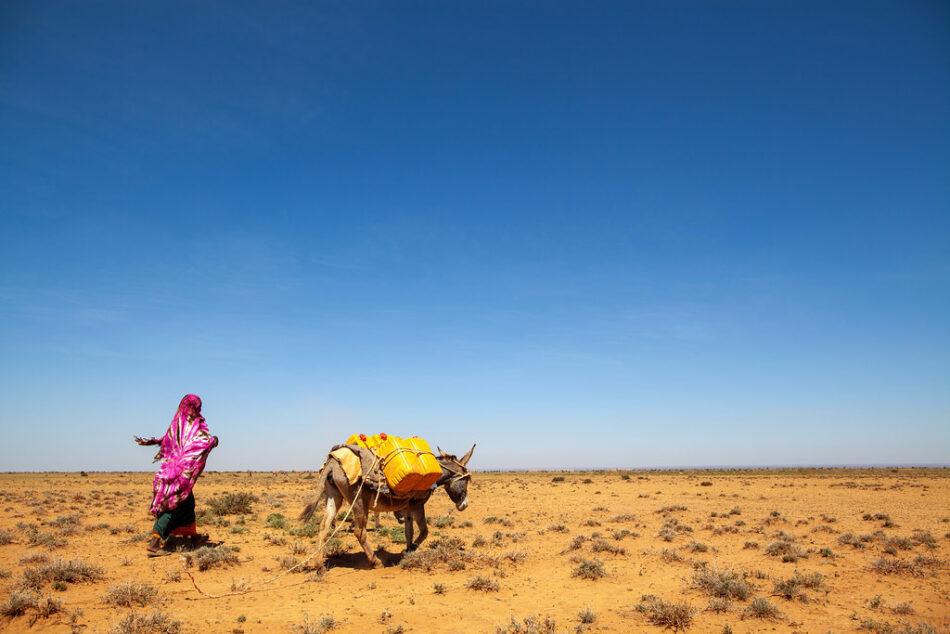 Typical coping strategies such as a nomadic lifestyle are inadequate to handle what is potentially the worst food crisis in Somalia’s recent past. Credit: UNDP Somalia.

The warnings have been coming for some time. Somalia is on the brink of catastrophe. A recent assessment suggests that 7.7 million Somalis need emergency aid right now. This is a similar number to those affected by the Ethiopian famine in 1984, one of the worst humanitarian disasters in history in which about one million people died.

The immediate trigger for the likely famine is three successive years of failed rains leading to the worst drought in the Horn of Africa for four decades. Underlying that are rising temperatures from climate change. Compounding factors include longstanding political and social fractures, with decades of conflict and poor governance.

Somalia is also strongly affected by the Ukraine-Russia war. It gets 90% of its wheat, which makes up two-thirds of the Somalian diet, from that region. The prices of cooking oil, beans, rice and sugar have also doubled from the conflict’s secondary consequences.

Humanitarian agencies have appealed to donors for assistance. The UN has asked for $1.46 billion. The International Red Cross Red Crescent requires a further $14.2 million. This is much more than what Somalia’s received so far. By mid-2022, the UN appeal for Somalia had received $280 million. With another $208 million provided outside the appeal, Somalia has garnered overall a shade under $500 million in humanitarian funding.

Extra humanitarian aid is vital to save lives and relieve suffering. The Somali government doesn’t have the capacity to support affected communities and personal coping strategies will be overwhelmed.

The worst crisis in recent history

Somalia’s population has more than doubled since the 1990s to 16 million now. Analysis indicates that 7.7 million Somalis need humanitarian support, of which at least four million need urgent food assistance. Of these, one million are already in pre-famine emergency, making this potentially the worst crisis in Somalia’s recent history.

Even without famine, Somalia is the world’s hungriest nation. This is both a cause and a consequence of being the world’s second poorest nation. In 2020, its per capita gross national income (GNI) was $420 compared to Ethiopia’s $890 or Kenya’s $1,840. Somalia is in this situation due to a combination of its long history of political instability, conflict, poor food production and, now, progressive environmental shocks with weather extremes.

Somalis struggle to get enough to eat and are forced to go for cheaper, energy-dense staples such as maize, sorghum, rice and wheat, with some oil. There is little fruit, vegetable, and meat consumption. This nutritionally poor diet sets the average household back by about $7 a day, a fortune in a nation where two-thirds of the population survive on less than $1.90 a day.

Even under usual circumstances, a fifth of Somali children are severely or moderately malnourished. More than 10% don’t reach their fifth birthday. If famine strikes, their fate will be dire.

Somalia’s highly aid-dependent economy and limited institutional capacities have never been able to care fully for citizens, despite impressive development plans. And so, Somalis have had to become resourceful and resilient through their own coping strategies.

These include traditional mutual-help social protection mechanisms. But most significantly, Somalis have historically coped through moving. A nomadic lifestyle meant a third of the population could shift when needed. An increase in the frequency and intensity of droughts, however, have forced more communities to move to urban settlements. Condemned to survive in over-stretched camps where their basic needs aren’t met.

Many Somalis move further afield. An estimated two million people seek opportunities outside their homeland. Their remittances home stand at about $1.4 billion annually, equating to about 25% of Somalia’s GDP and outpacing foreign aid and investment. Pre-pandemic, at least a fifth of Somali households relied on some money coming from abroad.

During the pandemic, remittances tumbled by two-thirds but are now recovering. The greater threat to this lifeline for desperate families and communities is anti-terrorist money laundering restrictions imposed by Western countries in the aftermath of the 9/11 attacks. These make it more difficult and expensive to receive funds, and even humanitarian agencies have struggled.

Because the drought is so widespread and affects so many, these precarious coping strategies are now under extreme pressure as famine threatens.

Somalia usually gets about a billion dollars annually for all types of humanitarian assistance. Long-standing donors – principally the European Union, UK, and US – have institutionalised their support to the point that it is more or less part of their routine aid budgets, including a gentle upward trend over recent years.

While there are concerns that numerous other crises will stretch donor budgets, Somalia hopes that it is less likely to suffer aid cuts. That is because of a progressive trend among donors to focus their assistance on fewer poorer nations and to skew this towards greater humanitarian-type interventions at times of disasters and conflicts. Even here, donors prioritise contributions on geo-political rationales including risks to themselves arising from crisis and instability elsewhere.

Tragically for Somalia, it ticks all the criteria for being a priority aid recipient. It is world’s poorest and most crisis-prone countries and is located in a geo-politically sensitive region that rich Northern countries worry could export terrorism and migrants if destabilised.

But these are no grounds for complacency. Humanitarian aid has never been enough to meet all life-saving needs. And currently, the gap between the aid that Somalia is likely to get and its sharply increased needs will get higher. That means increased suffering in the months to come.

There are no easy solutions. But disastrous impacts can be better mitigated if aid strategies maximise their effectiveness and efficiency through more decentralised and localised approaches that bolster local coping capacities, and not just dump relief on Somalia. It is also true that foreign aid will not solve Somalia’s underlying and recurring problems. Only political and social change within Somalia can do that, whenever their people and leaders are ready and sufficiently organised and coherent to do so.

Mukesh Kapila is Professor Emeritus in Global Health & Humanitarian Affairs at the University of Manchester.