Could an AU force with a fighting mandate solve Mali’s insecurity?

Despite the renewal of the UN mission, the UN Secretary-General has suggested a new force may be required to end the spiral of instability. 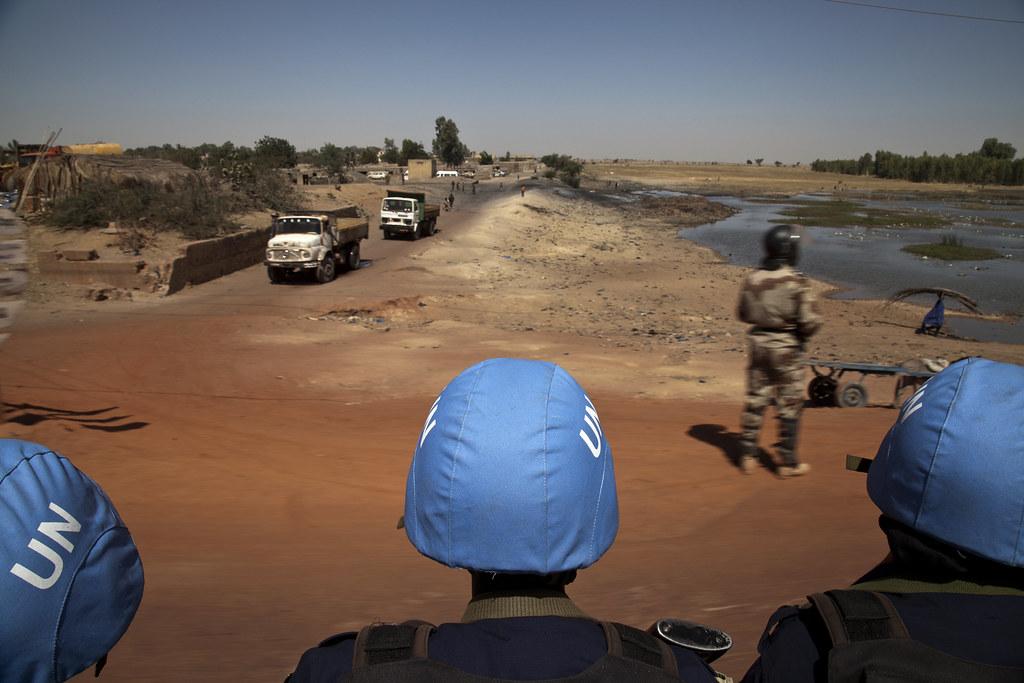 Since its deployment in northern Mali, MINUSMA has suffered the most casualties of any ongoing UN mission. Credit: UN Photo/Marco Dormino.

The UN peacekeeping mission in Mali, known as MINUSMA, is at a crossroads. In recent years, the approximately 15,000-strong mission has been sucked into a vortex of unrest, intensifying rivalries, and political crises. As the head of the force put it to the UN Security Council in January, “insecurity has expanded, the humanitarian situation has deteriorated, more children are out of school, and the country has been affected by an endless cycle of instability”.

Things were not always this way. Following its initial deployment in 2013, MINUSMA helped stabilise Mali after France’s intervention had driven back the Islamist insurgency that had hijacked an uprising by ethnic Tuareg groups. The mission was mandated with protecting civilians, supporting a nascent peace deal, helping displaced people return, and training the Malian army. It helped organise the 2013 elections and supported the peace process that led to the 2015 Algiers agreement.

However, things started spiralling out of control in 2016 as Islamist militants took advantage of anti-government sentiment and increasingly targeted UN troops. The security situation rapidly deteriorated and MINUSMA was left with a problem with was neither designed nor resourced to deal with. It recorded extraordinary losses. According to the latest UN data, MINUSMA’s 272 casualties means it has the highest number of deaths of any ongoing peacekeeping mission and the third highest for a UN mission ever.

Since then, Mali has witnessed a sort of security traffic jam with different forces all trying to restore stability with little success.

While French troops arrived as liberators in 2013, for example, they are leaving as neo-colonial oppressors, having failed to secure the region and become increasingly unpopular. A military taskforce deployed in 2017 by the G5 Sahel group – formed of five Sahelian countries – has been similarly ineffective, and Mali recently announced it is withdrawing from all the regional groupings’ institutions. And the European Union’s Takuba task force, which focused on training Malian security forces, is also winding down, citing the presence of Russian mercenaries and human rights abuses by Malian troops.

Now, many fear that Mali’s security traffic jam will turn into a security vacuum.

An AU force to the rescue?

It is this context that MINUSMA’s mandate was renewed for another year on 29 June. Its mission and size will remain the same despite a vastly changed context. Speaking in May, UN Secretary-General Antonio Guterres explained the rationale behind the mission’s continued presence.

“The true situation is that without MINUSMA, the risk of the country’s collapse would be enormous,” he told RFI. “I am not going to propose that this mission be ended because I think that the consequences would be terrible.”

Guterres added, however, that MINUSMA is “is operating in circumstances that really call not for a peacekeeping force, but a strong force to enforce peace and fight terrorism”. He suggested that such a mission would have to be led by the African Union; that it would need “a Chapter Seven Security Council mandate”, which would permit it to use armed force in the event of a “threat to peace”; and that it would require “obligatory financing”.

There do not seem to be active plans for such a mission yet, but the good news for the UN is that if such a force were established, it would have a precedent to learn lessons from in the Democratic Republic of Congo (DRC). The bad news is that that example is hardly a model for success.

The Force Intervention Brigade (FIB) was created in 2013 in response to escalating violence in the eastern DRC. Made up of soldiers from Malawi, South Africa and Tanzania, it was the first UN mission given an explicit mandate to “neutralise and disarm” various militias. The FIB was initially successful, working with local, regional and international actors to defeat the M23 rebel movement. But after this key achievement, political consensus evaporated and the brigade became ineffective.

An equivalent force in Mali would face similar challenges to both the FIB and its predecessors in the region. If Guterres’ suggestions were followed, the mission would benefit from obligatory financing – something the G5 Sahel force lacked despite French lobbying – but it would be deployed in a highly politically polarised region.

The West African regional bloc ECOWAS has only just lifted the sanctions on Mali after its military junta, who took power in a coup in May 2021, agreed to hold elections in 2024. Bamako has withdrawn from the G5 Sahel in protest at being blocked from assuming the presidency of the coalition. And Mali’s relations with Western donors and international bodies have frayed following its latest putsch, its growing recruitment of Russian mercenaries, and numerous allegations of human rights violations.

It is difficult to see how an AU force could be deployed with political consensus from all parties involved, or how it could effectively work in collaboration with Russian mercenary-supported Malian army accused of widespread abuses.

Perhaps the biggest takeaway from the FIB, however, is that a militarised approach cannot create sustainable peace when structural and political problems go unresolved. It seems that this lesson is yet to be fully learned in Mali, where the government and international partners continue to focus on counter-terrorism operations at the expense of protecting civilians, addressing inter-communal tensions, or confronting the region’s governance crisis. These are all issues Islamist militants exploit to their advantage.

Using military means to expand state authority will be unsuccessful so long as the state is abusive and poorly equipped to deliver essential services. This does not mean there is no space for security operations. Military force is needed to counter militants, stop armed groups from expanding, and maybe even bring them to the negotiating table. But it cannot solve and longstanding and deepening crisis alone.

Without a broader strategic shift, even a well-funded all-African force would only become the latest to join Mali’s security traffic jam.

The choice facing Kenya and how we ...

Simplifying peacemaking in a complex world

Ajay P. Karuvally is an independent researcher and blogger, focussing on peacebuilding and conflict resolution.