Zimdancehall was once known for its revolutionary lyrics. Now its singers are hyping up businessmen in songs and performing at Zanu-PF rallies. 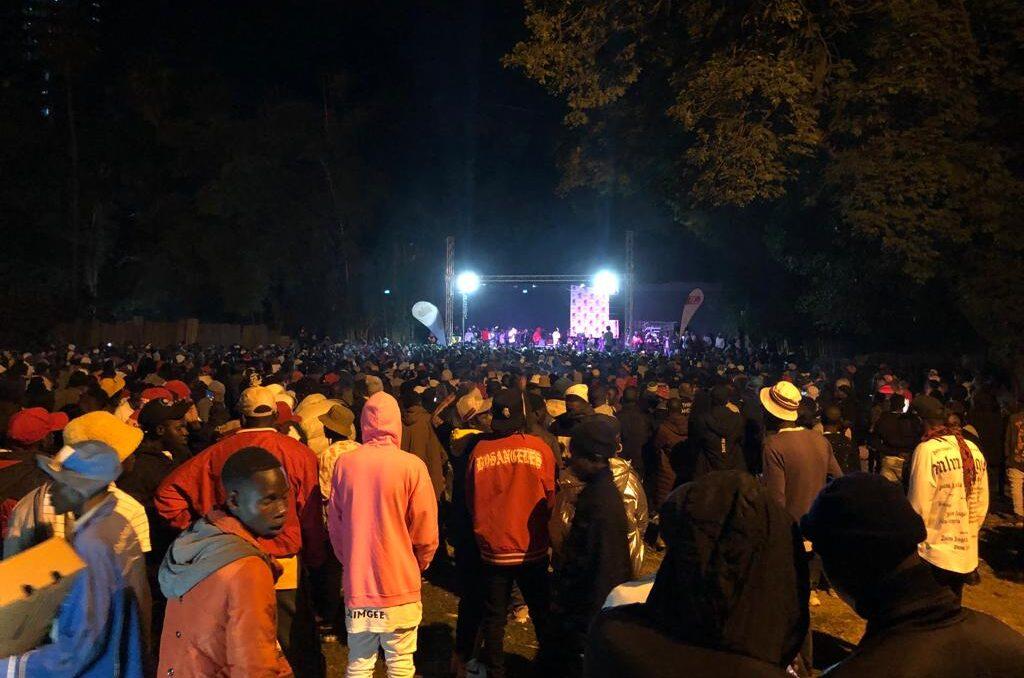 What started as indistinct chatter of disapproval on the night of 21 May escalated quickly. Crowds had braved the drizzly cold to commemorate Zimdancehall legends and celebrate the tenth anniversary of ChillSpot Records, not to listen to politician after politician gloat about the help they’d allegedly given to the music scene.

The ghetto yuts – a Jamaican term borrowed to refer to young Zimdancehall fans – were fed up. “That’s not what we are here for,” some shouted as bottles flew onto the stage, smashing into fragments.

For observers of Zimbabwe’s music industry, this moment had been a long time coming. For some time now, critics and fans alike have complained that Zimdancehall – a genre that once amplified the muffled voices of the masses – has gradually been hijacked by political and economic elites.

“I cannot even listen to most of the music released nowadays,” says Vincent Musira, a once ardent fan. “Zimdancehall no longer represents ghetto youths. Nowadays, they are chasing what’s trending and the contributions of their sponsors is questionable. If a sponsor is genuine, why would they want to appear on an artist’s music video or be mentioned in a song?”

“A blessing from God to the ghetto”

Zimdancehall, a locally blended spin-off of dancehall and reggae, gained meteoric fame about a decade ago. Despite its sometimes makeshift production, its Jamaican style riddims and grooves became the defining sound of Harare’s poor settlements like Mbare. Its bold and relatable lyrics struck at the heart of many Zimbabweans’ struggles and hopes.

Songs like “Minana” by Soul Jah Love and Cello Culture called out fake prophets at the height of “gospel-preneurship” in 2013. Winky D lamented rampant drug abuse in “Mafira Kureva” or societal immorality in “Pazvikona”. Killer T painted a grim picture of poverty driving young people into crime in “MaSuspects”.

Arnold Kamudyariwa, aka DJ Fantan, was working at a nightclub as the new genre took poor urban areas by storm.

“Back in the day, people would say Mbare is all about crime, prostitution and many other vices. But now when people hear the name Mbare, the first thing that comes to their minds is Zimdancehall,” he says. “Zimdancehall is a blessing from God to the ghetto youths”.

In the early days of the new genre, DJ Fantan co-founded ChillSpot Records with his childhood friends Levels and Ribhe. Together, they transformed his bedroom in the dilapidated Matapi Flats into a recording studio and began nurturing young talent into stars. Similar studios mushroomed elsewhere. From these, artists like Winky D went on to win two international awards as well as countless national gongs. Freeman became a household name across Zimbabwe. Soul Jah Love was declared a national hero when he died aged 31 last year.

“[Zimdancehall] gave ghetto yuts who did not have a future some hope”, says Ras Caleb, one of Chillspot’s first recording artists. “People need to understand that it was a lifeline.”

“Sold for a song”

According to critics, this heyday is well and truly over. They say that the days in which an aspiring unknown could get a slot at ChillSpot studios to blurt out hard-hitting freestyles for free or cheap are long gone. Now, they argue, musicians must sell their soul to promoters and ChillSpot, which has a near monopoly on Zimdancehall records, to get heard. These gatekeepers have the power to make or break a star and have allegedly not hesitated to exercise it, effectively ending the careers of promising artists like Blot and Silent Killer after disagreements.

Coinciding with these shifts, fans also complain that the lyrical content of Zimdancehall has drastically changed. Rather than calling out inequality and corruption, today’s songs almost invariably mention or praise an “mbinga” – i.e. a rich individual, prophet or politician.

Many of the figures being honoured in songs recently are members of Zanu-PF, which already has one eye on next year’s elections. The ruling party’s campaigns have often used music to drum up support in election seasons, but typically using a liberation war narrative. This time, it seems its politicians are looking to use trendy Zimdancehall tunes to target poor urban youth, a demographic that makes up a large portion of the electorate and often sides with the opposition.

“Due to its popularity, Zimdancehall became a target for opportunists who saw a chance to manipulate the vulnerable and uninformed talents,” says music critic Plot Mhako. He says elites have used their wealth and power to co-opt Chillspot and, by extension, the Zimdancehall scene for their own personal gain.

“The mbingas literally usurped the energy,” he says. “They are the main culprits who have worked in cahoots with key industry stakeholders to sell out the genre for a song.”

Fred Zindi, a local academic and music commentator, concurs. “Zimdancehall is on the decline,” he says. “There have been significant changes in the lyrical content as today’s singers are looking out to make money more than to do the ghetto stories of dissing each other.”

Some in the Zimdancehall scene, such as DJ Fantan and Ras Caleb, reject these critiques and insist the genre is as relevant as ever.

“I have stayed in the industry long enough to know that talk is cheap; you cannot stop [critics] from talking,” says DJ Fantan. “Even the day we started recording Zimdancehall, people used to say we would not go far in life, and there was a time when we would be pelted by cans, so we cannot fear comments from ghost accounts [on social media] today.”

He argues that musicians, some of whom have been criticised for performing at Zanu-PF rallies, continue to respond authentically to what is happening around them. “Zimdancehall is a mirror of the society; it is a reflection, and our artists are like reporters,” he says.

For many fans, Zimdancehall has lost its way over the past decade as its amateurish production and revolutionary lyrics have made way for commercialised production and a reverence of the rich. Some listeners may have given up on the genre, but others hold out hope of a resuscitation. As the angry response to Chillspot’s ten-year anniversary celebration showed, there are many enthusiasts ready to resist its political takeover.

“Zimdancehall is what the ghetto youths want,” says Munashe Maponga, a passionate fan. “Things are not so great at the moment, but what we need are new artists who will disrupt the current direction it is taking, and the real Zimdancehall will be back.”

Or, as Mhako puts it succinctly: “Zimdancehall is dead but not yet buried.”

Agbogbloshie: A Year after the Violent Demolition

Kennedy Nyavaya is a multiple award-winning freelance journalist based in Zimbabwe. His stories have been published in local newspapers including NewsDay and The Standard as well as foreign platforms like Clean Energy Wire (Clew) in Germany.