15 months into an 18-month transition, there are few signs of it ending. And the Western-backed interim president is acting a lot like his dad. 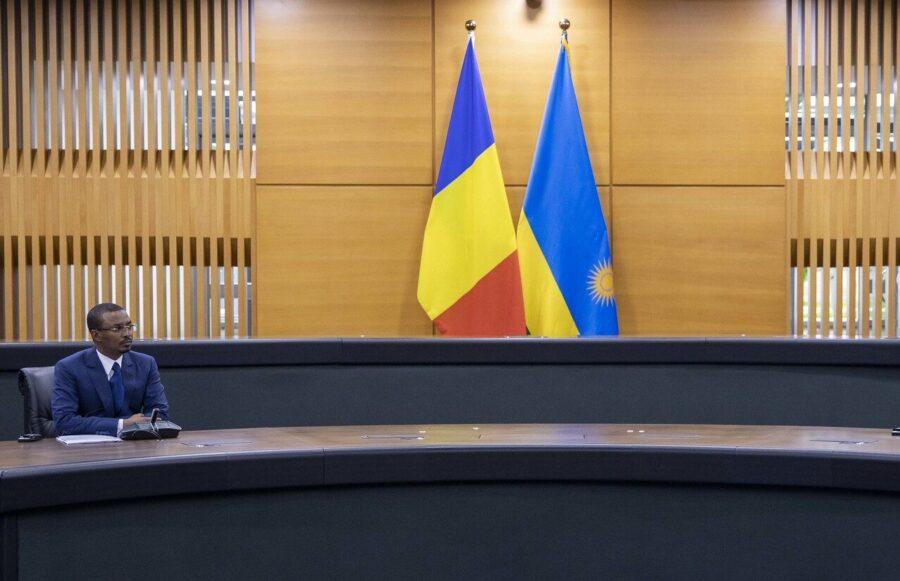 Mahamat Déby, Chairman of the Transitional Military Council and President of Chad on an official visit to Rwanda in March 2022. Credit: Paul Kagame.

Chad’s return to civilian rule is under threat. 15 months into a political transition that is supposed to last 18 months, the Transitional Military Council (CMT) has done little to prepare for elections and is repressing voices expressing concern. We are no closer to the possibility of Chad’s caretaker leader, Mahamat Déby, ceding the position his late father, Idriss Déby, held for over 30 years.

On 20 April 2021, when the military assumed power following the killing of Idriss Déby by Chadian rebels, the country was already facing dual challenges from inside and outside the country.

Domestically, anti-government discontent was on the rise and civil society movements were mobilising amid a range of socio-economic challenges. These groups openly challenged the ruling elite, gaining momentum around the April 2021 elections in which Déby won a sixth term in office. Externally, the military was confronting rebel attacks from southern Libya – one of which ended Déby’s life – as well as rising tensions with self-defence militias in northern Chad.

15 months later, the CMT under Mahamat Déby bears striking similarities to the former regime. It has consolidated power. It has used violence to crack down on dissent and peaceful protests calling for the return of civilian rule. And much like how Idriss Déby changed the constitution to remove term limits, it controversially suspended the constitution and replaced it with a transitional charter. Mahamat Déby has also notably not ruled out running for election when they are finally organised.

Although the transition period is meant to be approaching its conclusion with polls by this September, there are few signs this will happen. There has been little progress in terms of planning, and there are concerns over the institutions created to oversee the elections. Meanwhile, a national dialogue meant to develop a social compact among political parties, civil society, and rebel formations – and which has been presented by the CMT as a first step towards planning a vote – has just been rescheduled to begin on 20 August, having been postponed multiple times. Over 20 rebel groups have already suspended their participation in the talks, accusing the CMT of “harassments, intimidation, threats and disinformation”.

This behaviour poses a serious threat to the transition and to the creation of post-transition institutions that could be accepted by Chadians from different walks of life.

“The time has come” movement

Since the start of the transition, the Wakit Tama (“the time has come”) movement has mobilised people across Chad in opposition to the CMT. First created to oppose Idriss Déby’s bid for a sixth term, the coalition of political opposition and civil society groups has called for a return to civilian rule. It has organised protests against the lack of inclusiveness of the planned national dialogue and France’s perceived support for the military.

The Chadian government has responded in familiar fashion, frequently banning demonstrations or using excessive force. On 2 and 9 October 2021, for example, dozens of people were injured as security forces fired tear gas and rubber bullets at a protest. Similarly, this May, authorities violently dispersed rallies being held in multiple cities against France’s military presence and backing of Mahamat Déby. It also arrested six people who were later convicted of “disturbing public order”,  “harming property”, and “physical assault”.

Anticipating further protests, the Chadian government has issued blanket bans on demonstrations and threatened outspoken activists. Nonetheless, there will likely be further protests in the coming months as it becomes increasingly clear that the CMT intends to extend the transition period.

The West propping up the military

It is clear the transitional government cannot play the role of objective arbiter guiding the country to elections. Yet while the Waki Tama movement is acutely aware of this, several Western actors – such as France and the European Union (EU) – continue to support the CMT. This is no doubt because Chad is a key Western ally in the fight against Islamist extremism in the Sahel.

This too is a familiar pattern. As examined in the recent 2022 State of Civil Society Report, several military leaders in the region – including those coming to power through coups – have avoided serious censure from Western powers and managed to take advantage of their foreign allies’ preoccupation with migration control, security, and economic opportunities.

In Chad, this strategy is contributing to further risk of destabilisation and state attacks on people’s freedoms and democracy. As the Chadian people rise up to demand elections and an assurance that Mahamat Déby will not stand in them, the country’s Western allies – as well as the West African bloc ECOWAS and the African Union – must stand with them to ensure free and fair elections and a return to civilian rule.

Ine Van Severan is a Civic Space Research Officer for CIVICUS. David Kode is the Advocacy and Campaigns Lead for CIVICUS.