What did COP27 achieve (and fail to achieve)?

The climate negotiations made progress on loss and damage, but failed to address the central challenge of reducing carbon emissions. 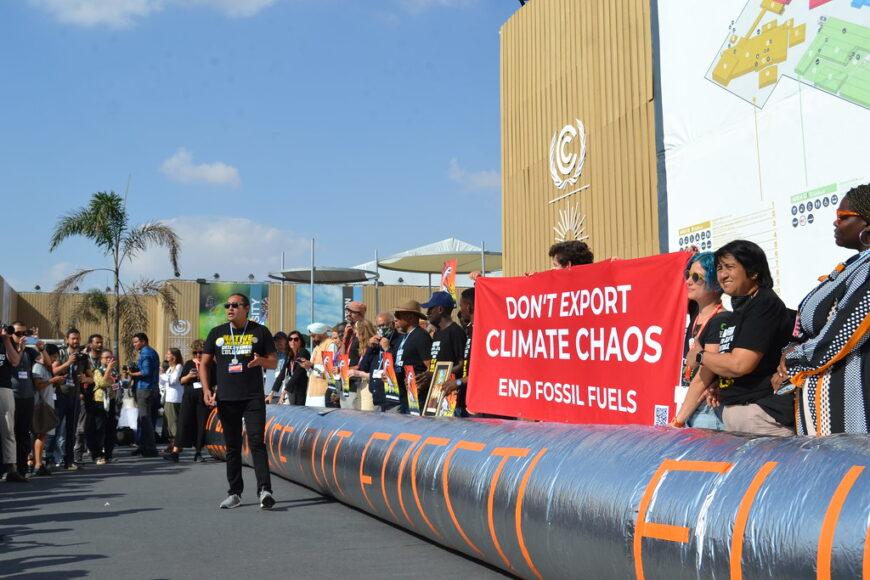 There were high expectations for COP27, the first to be held in Africa since 2016. These international climate negotiations were framed as the implementation COP, which would lead to action.

Did it? What were the key outcomes?

Outside the formal negotiations, there were clear and consistent messages about the urgency of climate action from scientists, NGOs and climate activists. They gathered at the event and in small, peaceful protests. The same urgency wasn’t seen among party negotiators.

Inside COP27, mostly wealthy country parties pushed back on immediate action on: support for people displaced by extreme events caused by climate change; strong and transparent governance of carbon markets; and the phasing out of all fossil fuels. This disconnect was striking and led to significant delays and setbacks in agreements relevant to climate justice.

Further, the decision-making process raises questions about the equity of different voices at COP27 and whose reality counts. All decisions within COP are made by consensus, not a vote. Decisions can be overruled by one dissenting party.

There’s also inequality in representation of countries and the prevalence of lobby groups at COP27. Certain countries can support large teams of party delegates and technical support. Poorer countries can’t.

New fund for loss and damage

A significant achievement of COP27 was an agreement to establish a new fund for loss and damage finance. This is funding to compensate developing countries for the harm to the climate that has been caused primarily by the developed world.

The negotiations around this were very contentious, with some parties threatening to walk out at various points. The central tension was between developing countries and developed countries, which did all they could to avoid a new financing entity for loss and damage.

Developing countries are largely represented by the G77 and China. This is a negotiating group of 134 developing countries initially founded by 77 countries in 1964. Rich nations tried to divide this group by arguing that China, India, and other less vulnerable countries should also have to pay for loss and damage.

It’s true that China and India are currently large emitters of greenhouse gases, but this approach shows a refusal to acknowledge the historical cumulative emissions mostly attributed to the early industrialisers. North American and European regions stand out as the largest emitters, though cumulative emissions varies somewhat based on which emissions are counted, how they are counted, and whether it is analysed on a per capita basis.

While the agreement on a fund for loss and damage is a significant step forward, a lot of work needs to be done before it is set up. The parties agreed to set up a transitional committee to make recommendations for adoption at COP28, in November 2023.

Technical assistance for loss and damage

An additional positive move was made with the agreement on the institutional arrangements to operationalise the Santiago Network. This mechanism was established at COP25 to help developing countries identify their technical needs and connect with providers of assistance to address them. In the case of flooding, for example, this would include improved systems to prepare and implement early warning systems and evacuation processes.

The next step will be to identify the host for the Santiago Network Secretariat.

Hold up on coordination of loss and damage

The Warsaw International Mechanism (WIM) was established in 2013 to provide coordination and encourage dialogue on loss and damage. Unfortunately, discussions on the governance of the WIM went nowhere.

Governance under COP would hold developed countries to account, whereas the Paris Agreement has a paragraph which excludes liability and compensation.

There were similar tensions in the discussions around the governance framework for carbon markets. Carbon markets allow countries or entities that can reduce or absorb emissions to sell them as carbon credits to high emitters. The markets can, in theory, reduce emissions and increase flows of climate finance if held to high standards of integrity and transparency.

However, new language in the decision text allows for confidentiality around the details of carbon credits. This could jeopardise transparency and accounting processes and reduce the likelihood of carbon markets contributing to mitigation.

These outcomes did not materialise. The new finance goal has been delayed to next year along with a status report on the commitment to double adaptation finance by 2025.

Various parties pointed out that climate finance should not worsen the indebtedness of developing countries. For the first time, the decision document acknowledged this issue. It also encouraged reform of the way multilateral development banks support climate finance.

No phasing out fossil fuels

This COP failed to get a commitment from all parties to phase out all fossil fuels. Instead of committing to this obvious solution to reduce emissions, parties insisted on using the wording of “accelerating efforts towards the phase-down of unabated coal power and phase-out of inefficient fossil fuel subsidies”.

“Unabated coal power” insinuates that coal (with carbon capture technology) could be continued. Specifying “inefficient fossil fuel subsidies” may allow for loopholes due to the definition of “inefficient”.

While COP27 has delivered significant progress on finance for loss and damage, it remains to be seen whether this will translate into action. The lack of progress on mitigation and adaptation meanwhile is a worry. In failing to deal with the central challenge of reducing fossil fuel use and reaching agreement on further reducing carbon emissions, COP27 has not addressed the key challenges of climate change.

The UN multilateral processes that govern climate change need developed countries to seriously commit to loss and damage. Treaties must be given greater enforcement capabilities. The parties will also need to find a mechanism to place common interests at the top of the agenda, above that of party interests.

It may also be time to assess the equity of representation and power in these processes. It has taken 30 years to make progress on loss and damage finance. Existing treaties are inadequate to hold parties to account on mitigation and adaptation targets.