A panel of experts and institutional actors reflect on what’s happened at the climate talks so far. 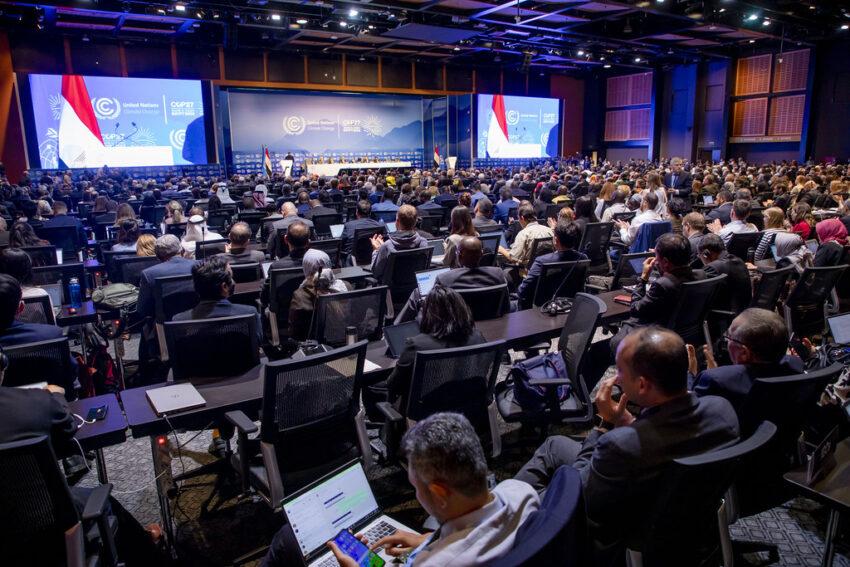 The African Center for Economic Transformation hosted a Twitter Spaces conversation at the halfway point of COP27 asking “is this really Africa’s COP?”. This is some of what the participants had to say.

Unfortunately, we are still waiting for a big announcement on adaptation at COP27. Historically, Africa has received more finance for mitigation than adaptation, so going into the conference, African negotiators have been pushing to increase funding for adaptation. This is especially important as we have all seen the rise in climate-related extreme events such as floods, insect infestations, cyclones, and droughts in recent years. However, rich countries seem to prefer funding mitigation, likely because the results are very easy to see. You can count how many megawatts of solar panels have been installed, and how much carbon has been removed. With adaptation, there are more human factors that are harder to quantify.

There are three things that need to happen next: unlocking the climate finance for adaptation that is already available; holding the rich countries to their commitments; and reforming the global financial architecture, to make climate finance more accessible to African countries. These reforms go beyond COP27, but they are urgently needed. With the current global financial architecture, it is very complicated for African countries to access finance. There is a lack of flexibility in the process, leading to long delays. Many countries have to co-finance to access climate funds, which is difficult when they have debt and other fiscal challenges. There are also internal challenges of poor governance and corruption, with climate funds not ending up in the right places. So we need to put our houses in order to make sure that we are able to utilise the funds.

As youth, we have a strong platform right now, because leaders are open to hearing what we want to say, even though our ideas are not always taken into account. What we want is to have the opportunity to also help implement policies coming out of COP27. The main worry of the youth is that the policies will not be implemented. We do not want to have the same talks at COP28 next year because nothing has been done. To ensure that this happens, we need to act as a collective, and we need to be unified.

A lack of implementation is a big concern, particularly for loss and damage. There has been a lot of loss and damage as a result of climate change, and this is disproportionately affecting the youth. It is a remarkable point for the topic to be on the agenda for this COP, but it remains an open question whether countries will actually commit to paying for loss and damage and follow through.

At COP27, people are tired of hearing about pledges; we want to see the money. Many delegates have badges saying WTF – “where is the finance?”. Fortunately, on the non-state actor side, there has been good momentum in this regard. The African Development Bank and partners have launched the green investment platform, and money is flowing in from philanthropists, the private sector, and other non-state actors. For the first time, we see African insurers and reinsurers make a commitment to underwrite sudden and extreme climate shocks and work towards creating a climate risk facility of $2 billion which will cover well over $14 billion worth of losses for the most vulnerable African populations. This facility will help build early warning and response systems.

There has also been a commitment by the Africa Business Leaders Coalition – 60 of the biggest African businesses that in total employ over 1 million people around the continent – on key actions to meet the Paris Agreement and support Africa’s just transition. The African Carbon Markets Initiative is another crucial development, even though there remains a large discrepancy in carbon pricing – with carbon credits in Africa priced much lower than the global average – that should be resolved. This kind of momentum is really what has given us more fuel to last through the next three days of COP, but much work remains to be done post-COP27.

We have done a lot to ensure that the voices of young people from Africa are being taken into account in deliberations at COP27. Leading up to the conference, we conducted a series of consultations to identify the needs and challenges faced by young people. At the Africa Climate Week in Gabon, where 100 young Africans attended, we talked about the need for capacity building and the importance of having an intergenerational dialogue rather than siloed conversations. Since then, we have held two roundtable discussions on Youth Day in November, where young experts and practitioners interacted with ministers and other global leaders. We have also held a series of virtual consultations with different youth-led coalitions in Africa. For the first time, there is a Children and Youth Pavilion, and there are discussions every other day between the youth and Prime Ministers, Ministers, and different key actors to make sure we can come up with solutions together. Through all that work, we are placing youth voices at the forefront – and we are ensuring that the perspectives of those who could not join us here physically are represented.

African youth wanted participation and representation at COP, and this has largely been achieved – we are well represented. I am very happy with the youth pavilion, and with the degree of access that young people have to policymakers. At COP27, and at the previous COP in Glasgow, government stakeholders have come to the youth and listened to us. However, my concern is that, in as much as the stakeholders hear our voices, they also tend to hide our voices. Often leaders seem to listen to us out of a sense of obligation, but when we look at policies, very little is actually implemented. Looking post-COP, we want to make sure that the youth – who are the main victims of climate change – are also taken seriously because we are also the creators of climate change solutions. Implementation is crucial and so far, we have not had our inputs taken into consideration.

The level of leadership from African heads of state, community leaders, and others has been an important development at COP27. With these voices taking a more prominent role in the process, there has been a strong push for more accountability on adaptation financing. At the same time, there has been movement on the African carbon markets initiative, which is an interesting climate finance solution to keep track of, as it could connect African countries more closely to net-zero initiatives in Europe and the US.

There has also been a greater level of scrutiny on fossil fuel development in Africa, with leaders and activists asking important questions: What should Africa’s energy pathways look like moving forward? Are fossil fuel extraction projects – which are mostly backed by oil and gas companies from Europe and the US – actually beneficial to African economies? Are they increasing the access to energy for the people living in those countries?

I have also been really heartened to see the role that human rights activists and Egyptian civil society groups have played at COP. The conference has provided a platform for them on the international stage to raise domestic concerns, and provided them with opportunities like holding a press conference, or having a protest or a rally – things that are ordinarily either impossible or very risky to do in Cairo.

Narrative matters: our opinions inform beliefs, beliefs inform actions, and actions inform investment, programme developments, and interventions on climate change in Africa. So when we think about narratives in the context of COP27, are we actually centring the voices, opinions, and thoughts of Africans? Or are we assuming that there is a lack of agency and lack of involvement? Our initial research carried out between 2021 and 2022 shows that a majority of the conversations that are taking place around climate change do not centre African voices. The people who are leading the conversations, programmes, and investments around climate change are not the people who should be at the centre of these conversations. In fact, the face of climate change in Africa is not an African – it is Greta Thunberg. And that is problematic.

Our research also shows that – despite this lack of representation – there is a lot of work taking place on climate change in Africa, especially at the grassroots level. We need to ensure that we are centring and framing those African voices and reflecting African everyday experiences – at COP27 and beyond. This means a narrative that is focused on young African voices and the things that are affecting their lives. It also means ensuring that Africans are not viewed as lacking agency or needing salvation, but as people very aware of what they need, especially when it comes to loss and damage finance. Programmes need to be developed in a way that reflects those needs and actually helps the affected people to recover from the impacts of climate change.

Agnes Kalibata, President of the AGRA

One of the things that I am most proud of is that – for the first time at a COP – there have been serious conversations about climate and the food system. The food system pavilion has given everybody an opportunity to chime in and ensure that the right conversations are being had around food insecurity, which is urgently needed as the number of food-insecure people is on the rise.

However, there is a serious lack of urgency at COP27 when it comes to the fact that we might exceed 1.5C of global warming. I keep saying it and I will say it again: there is no place for Africa in a 1.5-degree world. And we need stronger commitments to come through for people who are already struggling. There has been some positive movement: the Bill and Melinda Gates Foundation committed $1.4 billion and the IFC $16 billion towards adaptation, and a number of countries including Sweden, Ireland, and the Netherlands, recommitted to this agenda. But all of this is not strong enough, given the warnings from the IPCC reports about what is coming our way.

As a continent, while we put pressure on the world to come through on adaptation and mitigation, we also need to think of a plan B, which means we start finding our own solutions. We have things we can start doing and double down on – like working together to plant more trees, regenerate our soil, and reduce post-harvest losses.

Is it time to abandon decolonisation?

The African Center for Economic Transformation is a non-profit think tank based in Accra, Ghana.