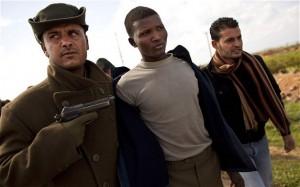 A 'sub saharan mercenary' is captured by Libyan anti-Gadaffi troops

It may be safer when discussing the impact and consequences of the “˜Arab spring’ in northern Africa to quote Mao Zhe Dong when asked to comment on either Paris 1789 or Paris 1968, “˜too early to say.’ However, the question of the imagery and narrative of black African people in the media coverage of the anti Gaddafi insurgency begs urgent questions.

When the international press pack of “˜world affairs’ (war) correspondents descended on Libya in February, they began to repeat uncritically and unquestioning  the Libyan insurgents’ claim that it was only the bloody thuggery of so called “˜black sub Saharan African mercenaries’ that prevented the collapse of the Gaddafi regime. There are now appearing some dissenting voices highlighting the apparent collective victimisation of what are still called “˜black sub Saharan Africans’ by the Libyan insurgents on the cusp of their victory.

Back in February I felt the need to write to the Guardian’s “˜Response’ column to point out the apparent contradiction between the description of how the allegedly “˜black sub Saharan mercenary’ hardcore of Gaddafi loyalist storm troopers terrorised the majority of Libya’s Arab population, and the continuous imagery and narrative fed by Western self styled “˜advocacy’ groups such as “˜Waging Peace’ of Darfur rebel movements such as the Justice and Equality Movement (JEM) as “˜African freedom fighters’ against “˜Arab oppression in Sudan.’ In the case of JEM and its leader Dr Khalil Ibrahim one actually does talk about the same kind of people (more on him later).

From Tripoli we get reports of mass graves of supposedly loyalist Gaddafi fighters, mostly of whom are described as “˜black Africans’, without any independent verification whether they were killed in battle or after they were captured, or whether they had been “˜fighters’ in the first place.

On the one hand, there can be no doubt that there were, and still are (fighting as Gaddafi dead-enders,) those who can described as “˜sub Saharan black Africans.’ They originate from neighbouring countries to the south of Libya in the Sahel and beyond, easily distinguished by their non Libyan Arabic or French tongues. On the other hand, the majority of “˜sub Saharan black Africans caught up in the insurgency were more likely than not just migrants working in Libya and/or looking to make it into Europe, who were caught up in the fighting after the insurgency erupted.

The likely origins of the fighters in the Gaddafi loyalist forces are as members of Gaddafi’s old Arab and Islamic Legions recruited in the Sahara/Sahel from Mauritania in the west to Sudan in the east. Gaddafi caused mayhem and havoc in his own backyard since he seized in power in Libya with his idiosyncratic “˜revolutionary’ mixture of pan Arabism, and when that did not work, pan Africanism, Islamism and pseudo Marxism. This may have appealed to some ambitious men eager to further their own cause and make an impact among their various ethnic groups and own countries in the region, though its majority was probably more attracted by the Libyan petro dollars Gaddafi was doling out.

However, what even the “˜world affairs’ correspondents of the quality print and broadcast media seem not to know, or appear to ignore, is that the southern Libyan region of the Fezzan is largely populated by peoples such as the Toubou and Zaghawa who are regarded as “˜African,’ as in non-Arab in origin, (though Muslim for centuries), who have also a history of discrimination in modern Libya.

These same ethnic groups also live across the borders in Chad and western Sudan (Darfur). Like so many other ethnic groups in the southern Sahara and Sahel belts, whether they are “˜Arab’, or “˜non Arab’ in origin, either being “˜Berber’, such as the Tuareg (whose relationship with Libya and Gaddafi has already been touched already on African Arguments), or “˜African’ as in “˜black African’ but who are all Muslim and to varying degrees Arabised and speaking various dialects of colloquial Arabic as a common regional language. They have as camel nomads of the Sahara, or cattle pastoralists of the Sahel, migrated through the region – lands became known to Mediaeval Arab geographers as the Bilad al Sudan, or Land of the Black peoples as distinct form the peoples on the Mediterranean littoral of Africa.

Lack of knowledge or understanding of the region’s history, cultures and anthropology, make it difficult on the ground to distinguish between “˜Arab’ and “˜non Arab’ or “˜African’. This has not however prevented journalists or NGOs generalising in reports and analysis, suggesting that “˜black Africans’, either as “˜mercenaries’ or “˜migrants’ are in fact strangers or aliens to Libya and linked to Gaddafi as the “˜bad guys’ or “˜villains’ of the story.

We now learn that Dr Khalil Ibrahim, in exile and protected in Tripoli since May 2010 after his former protector and Zaghawa kinsman Chad’s President Idriss Deby refused to allow him to return, has managed to escape from Tripoli, and is reportedly back in Darfur evading a force of Chadian and Sudanese troops in the Libyan, Chadian and Sudanese desert border lands.

Dr Khalil Ibrahim is typical of the Sahelian educated man with traditional status and influence who would be attracted to Gaddafi’s brand and mixture of Islamism, Arabism and Africanism in order to pursue his own ambitions against the established order. Belonging to the Zaghawa people, Dr Khalil Ibrahim has been able to draw support from his ethnic Zaghawa connections as well his modern ideological affiliates, switching in and out modern Sudan, Chad and Libya.

Dr Khalil Ibrahim’s link, and others like him, to Gaddafi has damaged the reputation of the Zaghawa, Tuareg or similar ethnic groups in the eyes of the Arabic Libyans on the Mediterranean littoral. As a combination of secularists, liberals and Islamists launched their Arab spring in February inspired by events in Tunisia and Egypt, they have had to reflect on their historical attitudes of superiority towards non Arabs and in particular “˜black Africans’. But on the other hand JEM and its supporters in the West such as “˜Waging Peace’ or Dr Anne Bartlett on Sudan Tribune (15 September) should reflect seriously that it is not “˜Khartoum’ but Dr Khalil Ibrahim himself and people like him who have endangered the lives of Darfuri and other “˜black African’ people and ethnic groups because of the close association of Dr Khalil Ibrahim with Gaddafi and his regime!