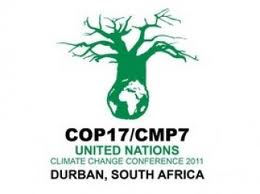 The UN Framework Convention on Climate Change conference (“˜COP 17′) started on Monday 28th in Durban. Whatever South Africa’s contribution to the multilateral debate, the business community remains somewhat uncertain about what the government intends on the home front by way of binding measures to address carbon emissions.

It’s true that since around 2009 the government has made no secret of its intention to more actively address the country’s high polluter status and coal-power dependency by diversifying its energy sources and behaviour-changing regulations and incentives. The cabinet has now adopted a white paper committing the government to taxing carbon emissions.

Pretoria is very conscious of its high polluter status on the continent – it remains sensitive to criticisms (valid or not) that it is contributing to greater risk of drought or floods in neighbouring southern African countries. It is also worried that, if its industries do not now begin a transition to lower-carbon emissions, they might lose the ability to access future markets that either tax or exclude imports from high-carbon economies.

Pretoria is also seeking reaffirmation and recognition as a serious continental and global diplomatic player – a tendency that increases its propensity to undertake initiatives that are seen as giving substance to its stated foreign policy aims. This might herald a forward push with wide-ranging carbon tax provisions.

However, the government is more likely to direct these energies to the multilateral plane. South Africa is under no international obligation (yet) to undertake reductions domestically. In the politicised atmosphere of the ANC electoral conference a year from now, economic realities are likely to limit its appetite for any 2012 legislation, at least without considerable exemptions for energy-intensive sectors. The current low growth outlook, the political and economic imperative to keep and create jobs, and steeper electricity prices all constrain its options. Pretoria should be very careful before it increases taxes on, for example, smelters – whose margins are narrowing through high power, labour and other costs, and who might decide to do business elsewhere.

On the other hand, the country does see opportunities in moving towards a greener economy. Unions recently signed onto the “˜Green Economy Accord’ intending to create thousands of manufacturing jobs in renewable energy and energy-efficient products, and there is interest in the country’s tender plans for renewable energy provision. Leaders in corporate life are not necessarily opposed to carbon regulation or pricing itself. What business leaders want above all else is clarity and signals that might enable them to begin to plan for a transition to a lower-carbon economy. They also seek assurance that any emissions tax revenue will go to adaptation-related spending, not general revenue. They will be far better-placed, say, in February, once the COP-17 drama has subsided, to gauge government’s appetite for any 2012 measure directly affecting big energy producers and users.