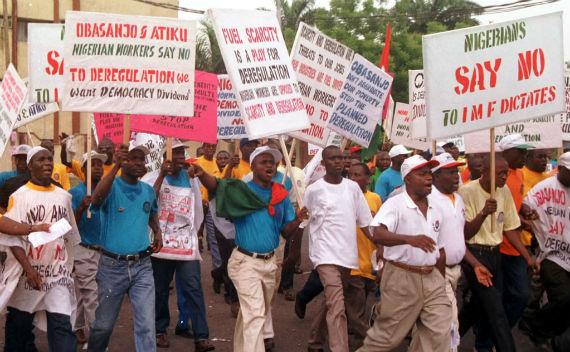 Demonstrators against the scrapping of the fuel subsidy

Starting on 9th January, Nigeria is set to be hit by a wave of industrial action following the government’s controversial decision to end the subsidy on fuel. Oil, aviation and service industries will be among those affected as Nigerians react angrily to the fuel rise which has sent the cost of a litre of petrol soaring overnight from 65 to 150 naira.  However, while PENGASSAN, the Nigeria Labour Congress (NLC) and the Trade Union Congress (TUC), the country’s largest trade unions, can expect widespread support for the strike, they do not have the necessary strike funds to sustain a long campaign.

The decision to raise fuel prices followed swiftly in the wake of the December visit of IMF President Christine Lagarde, providing ammunition to those critics who say that promises by the government of extensive consultations, and a vote against the proposal by the House of Representatives, have all been brushed aside in the wake of pressure from international financial institutions.

Nevertheless, the federal government’s policy of fiscal tightening will be boosted by recent good press on economic reforms, in particular Standard and Poor’s upgrade of its economic outlook from “˜stable’ to “˜positive’. An estimated 1.2 trillion naira (US$7.3bln) was reportedly spent on the fuel subsidy in 2011, representing a 700 per cent variance of the budgeted amount. This figure is of course unfeasibly high, but money spent on Nigeria’s fuel subsidy is unlikely to be the real cost of importing fuel. Rather, it has long been understood that a cartel within the petroleum sector has burdened the government’s subsidy programme, siphoning off large amounts of money and intensifying the deficits of successive budgets. This, an effort to placate Nigerians, only too aware of the financial opacity of state-related industries, is the government’s main defence of the subsidy removal.

Taking a longer-term view, deregulating the downstream sector may also be a money-saving bid in order to buffer Nigeria against any decline in oil production from 2012. The lengthy delays to the Petroleum Industry Bill (still held up in parliament) have in part contributed to oil exploration levels being at their lowest in 10 years. In addition, private investment in the country’s failing state-owned refineries may also move forward now that the subsidy has been removed.

However, in an apparent bid to clean up and cushion the county’s sovereign health, ordinary Nigerians, many of whom view the subsidy as an indisputable right, are the first to suffer. Promises of long-term infrastructure projects and poverty-reduction initiatives with the “˜saved money’ from a government hardly known for its fiscal transparency is no comfort for Nigerians, most of whom rely on affordable fuel for petrol as well as power.

The economic driver behind the government’s move is to eventually subsidise production rather than consumption, an ambition hard to argue against in a country striving for industrialisation. However, Nigeria’s increasing security woes from Boko Haram (driven by economic and political dispossession in the north), along with the unilateral nature of the subsidy removal, suggests that this is an ill-timed initiative where the Federal Government has signally failed to take the temperature of the Nigerian people.