Somalia: Sheikh Hassan Dahir Aweys and the politics of the al-Shabaab split – By Abdi Aynte 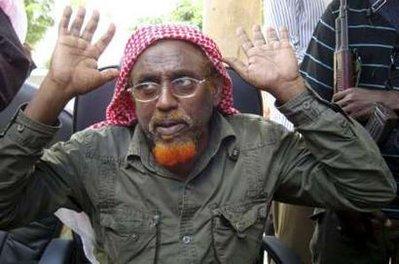 If a split within the rank and file of Somalia’s al-Shabaab militants was a mere speculation, it has now become a reality, thanks to a lacerating Friday sermon by Sheikh Hassan Dahir Aweys, Somalia’s best known holy warrior.

In a rare public dissent, Aweys sharply attacked the organization’s top brass, accusing them of, among other things, monopolizing jihad, globalizing the Somali conflict, assassination of innocent Somalis and, more damningly, acting in a manner unbecoming of upright jihadists.

For Aweys, who’s in his 70s, the public break-up with al-Shabaab is both personal and, more importantly, political.

As Somalia’s foremost jihadist and a perennial antagonist, Aweys has led one of the most eventful careers in the Horn of African nation. He had jumped ship countless times, starting from his days as a senior officer in the Somali National Army. In 1996, when Ethiopia obliterated al-Ittihad al-Islami, the successful jihadist outfit he helped establish and led, he reoriented himself as an Islamic scholar and clan elder in Mogadishu.

A decade later, he also helped establish the Union of Islamic Courts. It too was crushed by Ethiopia in 2006. Aweys fled to Eritrea where he helped form the Alliance for Re-Liberation of Somalia. The ARS was Aweys’ most ambitious project, as it comprised Islamists, secular politicians, nationalists, diaspora leaders and traditional elders.

When the moderate leadership of the ARS decided to negotiate with the Somali government in 2008, and eventually formed a national unity government in 2009, Aweys jumped ship again. With the help of Eritrea, he returned to Mogadishu in the spring of 2009 and launched Hizbul-Islam, an outfit he imagined to be an alternative to al-Shabaab’s extreme ideology. He hoped to place his organization at the centre of Somali politics.

But al-Shabaab was determined to gobble up its rivals. By late 2010, Aweys was forced to sign a contract under duress and merge with al-Shabaab. In taking this decision, Aweys told a close associate that he had three “disastrous options and a bad option.” Firstly, to refuse joining the Shabaab and be killed. Secondly, to impose a self-exile, which at his age and with “the terrorist brand” hovering over him, was an impossible option. Thirdly, to join the Somali government, which is “categorically much worse humiliation than joining al-Shabaab.” He took the bad option and surrendered to the Shabaab.

Just days after he had merged with al-Shabaab, he met with the organization’s reclusive leader, Ahmed Abdi Godane “” a man Aweys looks at condescendingly. In that meeting, Aweys was hoping to be rewarded for merging with al-Shabaab by being given his favourite post: the supreme leader, an Ayatollah-type position he held in the UIC, which grants him power without responsibility. Aweys’ jihad credentials are certainly commensurate with such a prestigious position, but to his chagrin, Godane demoted him to “holy warrior” – a title held even by al-Shabaab’s child soldiers.

This was an affront to the most veteran jihadist in Somalia. In the past year and half, Aweys “” and other demoted leaders such as Mukhar Robow Abu Mansour “” have sought to “solve the issue internally,” but to no avail. With no redress, they’ve waited for an opportune time to split from al-Shabaab, whose leaders formally joined al-Qaeda in February. The militants are rapidly losing power and popularity.

For Aweys, the perfect storm is blowing in his direction. There’s simply no better time to exact revenge against Godane and his junior deputies, who have humiliated him and other veteran jihadists. For nearly two years, he had to endure the painful reality of being irrelevant “” something he had never accepted.

But the break-up is also deeply political. A rare window of political opportunity is opening up in Somalia in a few months. The mandate of the Transitional Federal Government (TFG) is expiring in August, and an internationally-backed, UN-brokered arrangement is laying the ground for “an inclusive process” that would presumably include all parties of the country in the next government.

Inherently, Aweys is a very ambitious politician who’s more hell-bent on becoming the president of Somalia than blowing himself up in a suicide mission. In fact, a primary reason why he refused to join the 2008 Djibouti Agreement (that resulted in the formation of the TFG) was that he wasn’t going to become the next president. Aweys also knows the recent history of Somali “peace processes,” which invariably reward the guy with biggest and loudest guns.

In the short term, Aweys is likely to repackage himself as a nationalist insurgent leader. There are credible reports that, in association with Robow, Aweys will form yet another outfit that will present itself as the principal domestic opposition group to the TFG. To gain traction and both financial and popular support, Aweys is likely to rail against the unauthorized Ethiopian interventions in southern Somalia. Despite al-Shabaab’s brutality in these regions, the Ethiopian intervention is a powerful recruiting tool for any organization in Somalia, including the Shabaab. The two countries have a century-old rivalry.

Still, al-Shabaab’s global jihadists, led by Godane, will not let Aweys and his cabal breakaway without a fight. Aweys and Robow, who hail from powerful clans in central and southern Somalia, are already preparing for what could be the bloodiest infighting within the “mujaahideen.” But even if the “˜nationalists’, who are outgunned, are defeated in the initial battles, Godane’s global jihadists will be the ultimate losers of the war, because they’d have to dedicate separate resources for fending off attacks from four fronts, all the while putting down an internal revolt.

In the final analysis, the split within the Shabaab is yet another chapter in Somalia’s extraordinarily complex political system, where alliances shift constantly. The break-up presents another dilemma for the international community, as it attempts to help Somalia resuscitate itself from 20 years of state collapse. Yet the self-immolation of al-Shabaab is a step closer to ending one of Somalia’s most brutal episodes.

Abdi Aynte is a journalist with Al Jazeera English.