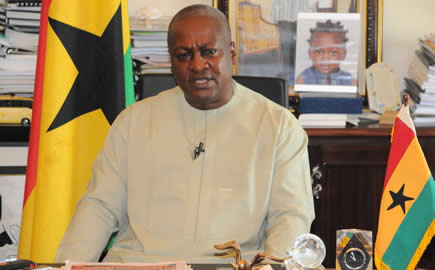 The current sentiment amongst most Ghanaians is that the West African nation is traversing a historic period in its 52 year lifespan. Regardless of political stripes, the nation has been united in grief following the death of incumbent President John Evans Atta Mills on 24 July 2012. It was the first time ever in Ghana’s history that a sitting president died in office. The uncertainty that loomed briefly was soon eclipsed by a cautious confidence in institutional capacity as the transfer of presidential power to the Vice President was seamless. Within the space of a few hours, parliament was recalled from recess, the VP was sworn into office as President by the Chief Justice under the auspices of Article 60 (6) of the Constitution and the new president, John Dramani Mahama, pledged to continue with the work of his “mentor” in the pursuit of the “Better Ghana” agenda for the remaining five months of Atta-Mills’ tenure.

In respect of the electoral timetable, general elections will be held in December, and in view of the untimely changing of guard at the helm of the country, new alliances, new formations and new strategies are being devised across all parties, not least of all within the ruling National Democratic Congress (NDC).

NDC – Thinking on Its Feet

The constitution of the NDC provides that “the President of the Republic who is a member of the party is leader of the party when it is in government”. Thus, newly inaugurated Mahama automatically became leader of the party and was named as such the day after his inauguration. The party was then to decide on what its next move would be as far as selecting a new party flag-bearer in the forthcoming elections.

There had been some speculation circulating in the public domain that the position could have gone to the second place candidate from the party’s July 2011 congress and leadership election – Nana Konadu Agyeman-Rawlings, the former first lady. However, this proposition was flatly rejected by NDC General Secretary, Johnson Asiedu Nketia.  Leaning on the party’s constitution, Nketia underscored that there is some ambiguity in the party’s constitution on that specific issue, yet highlighted that the party’s National Executive Council (NEC) is bestowed with residual power to take a decision when the unforeseen happens.

Two days after inauguration, Mahama was catapulted in to the spotlight as the NEC decided that the person to lead the party to the polls would be him. In a conversation with Songhai Advisory, an NDC party delegate from the Nyaniba Estate, Isaac Odai, considered that it was almost without question that Mahama would become the figure to lead the party to the ballot box. The justification being that “there is no-one more popular than Mahama as the NDC candidate”, an interesting assertion about a man who showed little in the way of harbouring leadership ambitions and whose choice as VP by Atta-Mills in 2008 brought to the fore rifts within the party.

Who is John Dramani Mahama?

At the NDC rally held in March this year in the forecourt of the Ga Mantse Palace, the crucible of NDC support in the Greater Accra Region, the crowds were in jubilant spirits, singing lilting rhymes. “NDC- the double-double” was one, where party supporters were referring to hopes of not only a double NDC term, but also the double “John (Evans Atta-Mills) and John (Dramani Mahama)” team. Unlike some Vice Presidents (who occupy more of a ceremonial role), Mahama has been an extremely visible figure, accompanying the President on visits, and competently leading state affairs on his own, both domestically and internationally. His recent visit to the US to promote his book “My First Coup d’Etat and Other True Stories From the Lost Decades of Africa” served in the cultivation of a statesman-like persona for someone whose loyalty to the president, outwardly at least, was unwavering.

His ability to engage and confidently address various audiences was clearly honed when he served as Minister of Communications between 1998 and 2001 as well as through his 12 year tenure as MP of his northern home town of Bole prior to becoming VP in 2009. Lessons learned from studies in History from the University of Legon in Ghana, and his postgraduate from the Institute of Social Sciences in Moscow also inform his world view, although he admits in his book that his time in Russia “began to move [him] away from a devotion to any one ideology or archetype”.

Believing in the potential of the African continent and being a celebrant of its successes does not preclude him from looking squarely at the 1960s-1980s and acknowledging that the amount of instability in those intervening years was inimical to Africa’s development. Nevertheless, he now sees that those “lost decades” have been replaced by the “found decades” of the present era, in the context of rapidly growing economies, greater political party plurality and strengthening civil society. A pragmatist too, Mahama is of the opinion that Ghana’s growth and development have to be proactively sought, and his government’s pursuit of a US$3billion loan from the Chinese was an example of that pragmatism, as Ghana seeks to plug its huge infrastructure gap.

Challenges from Inside and Out

With only five months to go before the presidential elections, we can expect so see parties using this period of seismic change within the NDC as an opportunity to outwit the party. Eyes will be on the NDC’s key opponent, the New Patriotic Party (NPP) and its flag-bearer Nana Akufo-Addo, a second-time challenger for the presidential spot. Prior to the death of Atta-Mills, the NPP had been most critical about the ruling party’s handling of judgement debts – the huge pay-outs to companies following the alleged reckless abrogation of government contracts. Yet the NPP also had to defend itself from accusations of double-standards as it emerged that when Akufo-Addo himself was Attorney-General between 2001 and 2003, he too authorised such payments.

The machinations of the recently-formed NDC breakaway National Democratic Party (NDP) will also continue to grab the headlines. This NDC offshoot maintains that the NDC has deviated from the core values of probity, accountability and transparency. It has managed to mop up support from the staunchest of critics from within the NDC, such as Dr Kwasi Ofei Agyemang and Michael Teye Nyaunu. But it has not yet been able to convince the moderates within the Friends of Nana Konadu Agyeman-Rawlings (FONKAR) faction of the NDC – some vocal figures such as Dela Cofie expressing their disappointment at the creation of the NDP, branding it a divisive move.

The finger of blame that is currently being pointed at Nana Konadu Agyeman-Rawlings, may very well have to be withdrawn, as the former first lady’s association with the NDP has not been officially confirmed. The NDP’s fate is also uncertain, as the Electoral Commission’s endorsement of the party is subject to the scrutiny of the party’s application for registration. There is a certain amount of conjecture on the streets as to whether Agyeman-Rawlings and her support base could re-enter into the NDC fold, particularly as it has been reported that Kofi Adams, the suspended NDC General Secretary who is also viewed as a spokesman for both Rawlings, has called for the NDC rank and file to support the NDC.

Politics only paused – will resume soon

While Ghana is going through this period of official mourning, we can expect the sober mood to continue, but political campaigns will surely resume soon after. The December 2012 elections were always going to be a closely fought contest between the two major parties, and it is unlikely that the untimely passing of the incumbent president will dampen that quest for the leadership spot. But the dynamics have altered somewhat – the NPP will hope to capitalise upon the shift in leadership of the NDC. Meanwhile, the NDC will seek to mop up sympathetic voters, and with the staunch NDC critics likely to be absorbed by the NDP, the ruling party will aspire to present a more cohesive force than before.

Should the NDP fail to keep the Rawlingses on board, its chances of success will be put under severe strain. It is not implausible that some NDC members critical of Atta-Mills may try to bring themselves back into the fold. Thus far, Mahama’s language has been conciliatory rather than adversarial, preferring to refer to the opposition parties as “opponents” rather than “adversaries”, and he has already appealed to all parties to promote peace and stability, in order that Ghana will be “a beacon of hope for Africa”. There are undoubtedly a number of question marks as to precisely how developments in Ghana’s political sphere will unfold, but one certainty is that the country is experiencing historic change, just how well it manages this change will be the real test of its democratic credentials.

Violence in the Eastern Congo: Rwanda ...