Uganda’s constituency of one: Museveni faces challenges from within and without – By Magnus Taylor 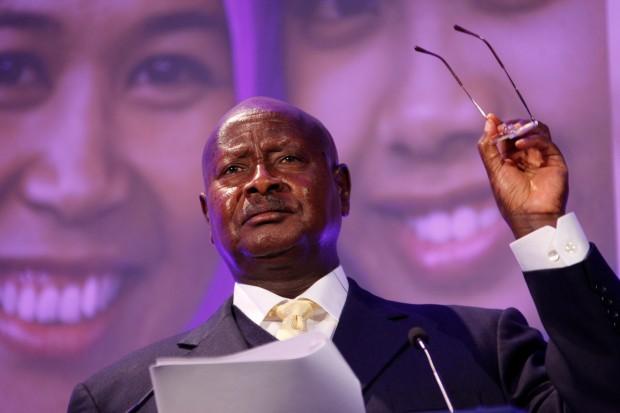 President Yoweri Museveni has been untouchable at the top of Ugandan politics for almost 3 decades, but is change now coming?

In Kampala it is sometimes difficult to distinguish between policemen and soldiers. Both stand around in groups at roadblocks or hang out the back of official pickup-style vehicles, guns held loosely by their waists. The state’s most significant institutions are surrounded by the most armed men – the parliament, the airport and the country’s number one institution: President Yoweri Museveni.

But a number of people, both Ugandans and expats who have been in the country long enough to “know how things work here,” tell me that Uganda doesn’t really have institutions, but is run through the writ of the President. Sure, there are ministries, ministers and many capable people working in government, but the real decisions – from commercial deals over the developing oil industry, to the final say over new legislation – come from the top.

President Museveni has been the man at the top for 28 years since his National Resistance Army swept into Kampala in 1986 booting the short-lived Okello government out of power and then defeating Alice Lakwena’s Shea butter smeared mystic army outside of Jinja. He has had his difficult times during this period – the first being the long-running civil war in the north with Joseph Kony’s “˜Lord’s Resistance Army’ (LRA), which forced him to expend huge military resources chasing a force of religious zealots and child soldiers through Northern Uganda, Eastern Congo and South Sudan. Even now Kony remains un-caught and 2 US air force planes on the runway at Entebbe are testament to the internationalised 25 year quest to hunt him down.

In 2006, at around the time Kony was served with an Interpol Red Notice (as if he was about to jump on a plane to Paris), and soon after Museveni permitted the advent of multi-party politics, the President faced a real electoral threat from Kizza Besigye’s Forum for Democratic Change (FDC). According to the reported testimony of renegade former intelligence chief, General Sejusa, (now resident in London) this election was fixed massively using a parallel counting centre facilitated by intelligence officials. According to Sejusa, Besigye actually won with a barely credible 69 percent of the vote.

The FDC lost again in 2011, but more convincingly this time and with less rigging. A former head of the army – Mugisha Muntu – took over the presidency of the party with Besigye remaining active in politics. The opposition, currently operating as a coalition of political parties, including Norbet Mao’s DP and Olara Otunnu’s UPC, has all but given up on getting rid of Museveni through the ballot box. They think it simply can’t be done. As the President himself once said: “a mere piece of paper will not remove me.”

Instead, they are focusing on electoral reform first with the hope of achieving several, seemingly sensible things. These include: the creation of a fully independent electoral commission, the inclusion of diaspora Ugandans in the electoral register and the reduction of the role of the military during elections themselves. They want to have a national dialogue later this year, to meet with the president and develop a strategy by which a peaceful political transition can take place.

There are rumours in Kampala that Museveni is also looking for a way out, but sees no realistic candidate to take over from him. He doesn’t view the opposition as a serious movement – they are in it for themselves and will bring the country down. There are counter rumours that he wants to hang on until Uganda starts reaping the benefit of “˜Museveni’s oil’, which now looks like it won’t come out of the ground until around 2022 (predictions on this front are perilous though as the original date has been continually delayed since oil was first discovered in 2006). And then there’s the “˜Mohoozi Project’ – handing over, but to his son who currently a Brigadier in the UPDF and, coincidentally, commanding the hunt for Joseph Kony.

Opposition activist, Bishop Zac Niringiye, who is without a political party, but has placed himself on the frontline of the movement’s activism, tells me bluntly that “you can’t have free and fair elections [in Uganda] with Museveni on the ballot paper.” “˜Bishop Zac’, as he is known, retired from his position as Assistant Bishop of Kampala in 2012 (7 years early) with the intention of spending more time on his “˜good governance’ campaigns, including the “˜Black Monday’ anti-corruption drive. He has a PhD from Edinburgh University, but when I meet him in his book-lined office at “˜Aclaim Africa’ on leafy Nakasero hill, not far from the President’s own Kampala residence, his critique is anything but academic.

It begins with a description of his recent attempts to hold a meeting on electoral reform in Mbale in eastern Uganda. Whilst the group had informed the local authorities that they would be holding a meeting, and apparently been given the go-ahead, when they arrived they were obstructed in every way possible. After attempting to move the location of the meeting from a hotel (which they were not allowed to enter) the police used tear gas to break up the crowd and the bishop was manhandled by a police officer and repeatedly called “stupid Bishop!” Besigye, a veteran of clashes with the Ugandan police, was forced to find refuge in his car and then driven out of town. Later when they attempted to return to their hotel they were not permitted to enter due to a supposed security alert involving Al Shabaab.

Bishop Zac tells me that this heavy-handed reaction from the police was undoubtedly a consequence of orders “from above”, because “Museveni hates it when it looks like people could be organised.”

I also think there’s something particular about people becoming “˜organised’ outside of Kampala. The Ugandan capital doesn’t feel like a place locked into a dictatorship. People talk politics pretty freely, the press – particularly The Monitor (until it crosses a line, as with the Sejusa letter in 2013) remains fairly free to publish what it wants. One can only speculate as to what it does not publish – stories on the First Family are widely thought to be out-of-bounds. A large array of NGOs (and many which work on issues of governance) operate in the city and do so apparently with care but without too much trouble. Proposed strengthening of the powers of the NGO Board (the sector’s regulator), coming out of the office of the Minister of Internal Affairs, General Aronda, (the military are big in Ugandan politics) will be worth watching though.

NRM, however, seems relatively unconcerned with what goes on in Kampala amongst the city’s small middle class. Kampala is a city with a historically low electoral turn-out and strong support for the opposition. But I hear from several sources that talking about transparency and accountability in Kampala-based meetings is one thing, but defending the rights of people “˜on the ground’, such as those recently displaced and inadequately compensated by plans to build the country’s first oil refinery in Hoima district, is quite another. The principle seems to be “˜don’t organise where our vote is’. And “˜don’t mess up the projects we care about.’

During our conversation, the activist Bishop Zac breaks off on several occasions to field phone calls about the logistics of an upcoming trip to Kasese in the west of the country, once again to talk about electoral reform. He’s clearly not giving up easily, so watch this space. I ask him whether, given his rising profile, he has any of his own political ambitions – perhaps as a compromise opposition presidential candidate. He tells me that this is “the wrong question” because, as previously stated, there’s no point talking politics until the President steps down.  “Can I lead this country? – Of course, it’s not rocket science. But that’s not what I’m thinking about.”

Whilst the opposition may be brave and committed I am told that what is likely to happen is what always happens – they empower people to take to the streets, Museveni deploys the police to beat them up, they get tired of being beaten up and go home again. If he wants to change the constitution so that elections can be delayed beyond 2016, a suggestion that was recently raised in parliament by an NRM MP, then he could present it as allowing time for electoral reform to take place and would probably have the votes to force it through. Uganda’s MPs, who are removed from office by the electorate in extremely high numbers, have a vested interest in delaying the polls for as long as possible.

Despite his apparent omnipotence, Museveni faces a significant challenge from within his own party, which is probably where the most significant threat to his continued control lies. This is in the form of his former right hand man, current Prime Minister and party Secretary General, Amama Mbabazi, who has been building up parallel support networks (although he denies it) within NRM for years, apparently with a view to, at some stage, taking over the top job. Museveni, however, recently called him out over this at the NRM’s parliamentary caucus meeting at Kyankwanzi, and a resolution was tabled, which Mbabazi signed, that Museveni would be the NRM’s sole Presidential candidate.

Mbabazi has, however, always maintained that he will not stand against the president, but it is my suggestion that it has never been his intention to do this, but rather to be the next in line following a transition out of the Museveni era. His demonstration of strong political support within NRM may be a factor in hastening the President’s departure. The NRM is said to be polarised over this issue and the atmosphere between the two families, poisonous.

So, whilst the opposition risks broken heads, tear gas and insults up-country, it is probably from within the elite organs of Ugandan political power that there exists the greatest chance of change.