Three Lessons in Repression from Khartoum to Juba – By Katie Campo 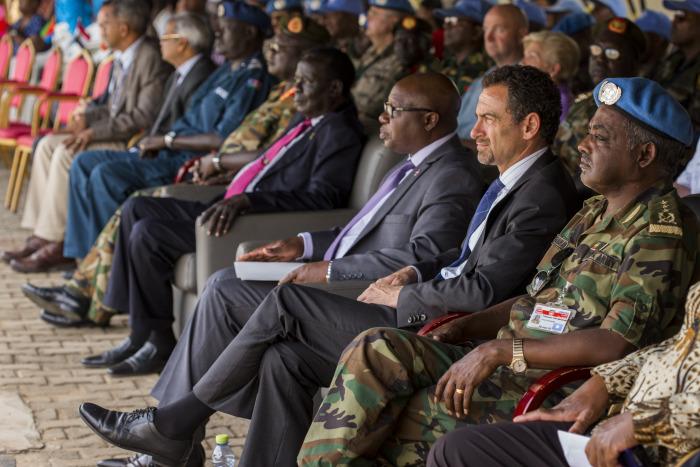 Civil society activists in Khartoum suffered at the hands of Sudanese authorities for decades, but there was hope for South Sudanese activists after the country seceded from the north on July 9, 2011. Most of South Sudan’s leading activists and journalists relocated to Juba, where they hoped to start afresh and contribute to developing their proud new nation. Today, almost four years later, South Sudan has crumbled into a war zone, and civil society is on the defensive yet again. South Sudanese authorities have taken a page out of Khartoum’s playbook by targeting activists and journalists. Like their brothers in the north, South Sudan’s security authorities now expel foreign aid workers, shut down civil society organizations, and seize newspapers.

Six months ago, Sudanese authorities expelled two leading UN officials in the north, UN Resident and Humanitarian Coordinator Ali al-Za’atari and UN Development Program chief Yvonne Helle. Juba watched and learned: earlier this month, the top humanitarian official in South Sudan, Toby Lanzer, was expelled. Mr. Lanzer served as deputy special representative at the UN Mission in South Sudan and used Twitter to call attention to the utter failure of South Sudan’s leaders to resolve the ongoing conflict. In February, South Sudan’s Minister of Information Michael Makuei even proclaimed in a moment of frustration, “That UN — I will shut it down.” It appears he has got what he wanted, and there has been little reaction from the international community.

Lesson #2: Go After the Activists

Sudanese authorities have made a habit of shutting down civil society organizations, detaining activists, and generally silencing dissent. In September of last year, the Regional Center for the Development of Civil Society, an NGO working to build political participation, was raided and shut down. The organization’s equipment and files, including computers and hard drives, were seized for inspection. Within the last two years, a number of other organizations experienced similar raids and closures – al Khatim Adlan Center for Enlightenment, the Sudanese Studies Center, and the Sudanese Writers Union, to name a few.

While the restrictive environment in Khartoum is nothing new, Juba’s changing attitude towards civil society is something to fear. In the last six months, the situation has deteriorated rapidly, such that some activists cannot travel anywhere alone for fear they will be “disappeared.” Human rights leaders are called in for questioning on a routine basis, others receive anonymous, threatening phone calls in the night.

For the first two weeks of April, the border between Sudan and South Sudan was a mirror. On April 12, Sudanese activist Sandra Kadouda was snatched from her car and held in detention for several days, where she was reportedly beaten. Some fellow activists believe she is only alive today because she had been talking to a friend on the phone, who immediately took action when she was taken. That same week, some 750 miles south in Juba, South Sudanese opposition politician Peter Mayen Majongdit was taken from his home and held incommunicado for seven days. When he was released, he said he had been blindfolded and badly beaten in detention.

On February 16, fourteen Sudanese newspapers were confiscated from the printing press before hitting the streets. The Minister of Information warned that any publication that might harm economic or social security would be prohibited. In December, Al Midan newspaper, the Communist party mouthpiece, was confiscated, and Editor-in-Chief Madeeha Abdullah was accused of undermining the constitution, a charge that carries the death penalty; her crime: publishing a quote by rebel leader Abdelaziz al-Hilu in her newspaper.

Meanwhile in Juba, violations against freedom of the press continued to pile up over the last year. In August, Radio Miraya reporter George Livio was arrested, and the government shut down South Sudan’s most popular radio station, Radio Bakheita. Veteran journalist Alfred Taban spends about as much time in detention as he does writing articles. In February, authorities shut down Nation Mirror newspaper for reporting on a rebel attack against government forces. Like Madeeha Abdullah in the north, reporters in Juba have been warned not to broadcast interviews with rebel leaders.

Reporters Without Borders ranked Sudan 174 out of 180 countries in its 2015 World Press Freedom Index. Forty-nine spots up sits South Sudan at number 125. At the rate South Sudanese authorities are learning from their former brothers in the north, it won’t be long before South Sudan slips down closer to its neighbor.

Until South Sudan’s civil war erupted in December 2013, the country was one of the United States’ closest allies in Africa. As National Security Advisor Susan Rice said, “we helped to midwife the peaceful emergence of an independent South Sudan.” Now that this nation we helped birth has matured into an irresponsible, war-hungry state hell-bent on repressing civil society and media freedoms, what is there to do? It is time for Juba’s leaders to unlearn their lessons from Khartoum; and it is time for South Sudanese civil society and the international community to make them do that.

Katie Campo is a Program Officer at the National Endowment for Democracy. She previously served as a Political Officer at the U.S. Embassy in Khartoum, Sudan, where she specialized in Darfur. Katie writes in her personal capacity, and views expressed are her own. You can follow her on Twitter at @KatieCampo1.