Joking Aside: What you may have missed in Tanzania’s elections

Presidential push-ups, a disappearing secretary-general and more promises than you can shake a stick at. Welcome to Tanzania’s election race. 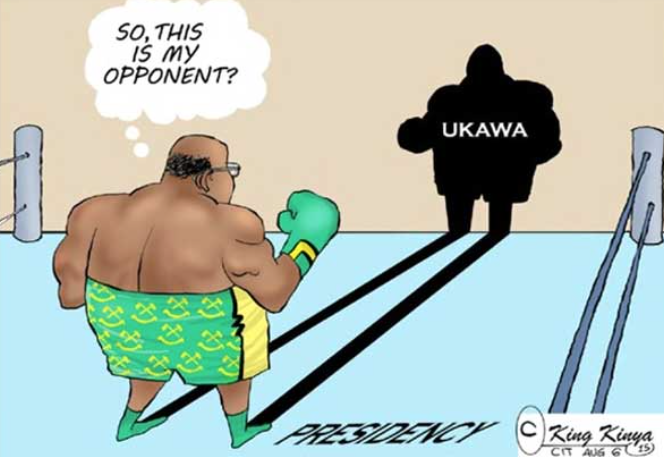 Things are heating up as Election Day draws near in Tanzania. The ruling Chama Cha Mapunduzi (CCM) surprised the nation in the primaries by electing Magufuli as its presidential candidate. He has formerly served as Minister of Public Works and is a bit of a wildcard. A sitting titan. A sleeping menace. A squatting giant.

Since then, there has been a small migration of very important people from CCM to Ukawa, the opposition alliance. In July, the country was shocked as former prime minister Edward Lowassa (who had been one of the favourites for CCM candidacy) slammed the door on CCM, got in his daladala and rode down to opposition offices where he was immediately made into Ukawa´s presidential candidate.

So now, the squatting giant is facing his toughest challenge yet: the wrath of The Defector, Edward Lowassa. Strange things are beginning to happen.

For some top analysis of the background to what looks set to be Tanzania’s closest ever elections and how we got to this point, check out this excellent piece that will tell you all you need know. But for all the things you may have missed from the election, keep reading below.

On 21 September, Magufuli could be seen face down on a dusty platform in front of thousands of supporters, doing push ups. A few days before, someone had publicly suggested that Magufuli is too unfit to run for presidency. Magufuli decided to refute this by, quite literally, showing his muscle.

It is important to remember that the Tanzanian political tradition involves plenty of showmanship, spectacle and performance. Dr John “Chuck Norris” Magufuli is only part of the game, so it would be unfair to ridicule him, right?

And yet, the opposition had a field day on social media, with funny memes, tweets, photo-shopped pictures and more, under the hashtag #kazitu or #hapakazitu. The CCM managed to re-appropriate the hashtags, and even came up with the dangerously catchy song Hapa kazi tu, but they will have to remain on top of their game going forwards – Ukawa supporters are younger, urban and more middle-class than CCM supporters, as well as more media and social-media literate.

For Dr John “Rocky” Magufuli, it is safe to say that his stunt boomeranged through social media and, at least at first, came back to hit him in an area that wouldn’t be exposed if he wasn’t doing push-ups in the first place.

Kikwete throws his weight behind CCM

Sitting president Jakaya Kikwete’s two terms are over, but he will continue as national chairman of CCM until 2018. He therefore has an interest in the continuation of CCM´s stronghold over state structures and does not want to be remembered as the first president to hand over power to the opposition. Recently therefore, Kikwete announced his support for CCM and John “The Hulk” Magufuli.

The question is if Kikwete´s support for CCM will come only in the form of warm words, or if he might use state institutions to take more deliberate and covert measures to ensure success.

The sitting government is all of a sudden fast-tracking certain projects, such as the new development project in Kigoma, which was set in motion right before Magufuli was due to tour the region. Citizens are perhaps being encouraged to remember the good times with JK and forget the less good times (*cough cough* Richmond *cough cough*).

The mysterious disappearance of Dr Slaa

Doctor Slaa has vanished, evaporated, gone forev– nope, wait, he’s back. Or is he…?

Wilbrod Slaa is the former secretary-general of CHADEMA, one of the main opposition parties. He is also an influential person with quite a lot of support. At first Slaa appeared supportive of Edward Lowassa when the latter was named as the opposition’s presidential candidate. But since then, there must have been a quarrel as Dr Slaa became extremely vocal about his opinions, specifically the ones about how Lowassa is corrupt, untrustworthy and thoroughly unfit to run the country.

In July Slaa, went missing. The public wondered and speculated, and CHADEMA finally continued their meetings and campaigns without him.  He did though “speak out” through various third parties, reassuring the public that he had not changed sides. On 8 August, The Citizen reported that Slaa had fled to the US with his family, “fearing for his safety”, although no other papers picked up this story.

Then, in early September, Slaa was in the news again, issuing a statement declaring that he was quitting politics and resigning his post “following a misunderstanding with his fellow party officials over the nomination of former Prime Minister Edward Lowassa”. Let’s see what he does next.

CCM seems to have been taken by surprise by the situation in which it finds itself. The party has been without a real challenger since the return of multiparty politics in 1992, and its many influential members have perhaps become too comfortable. Since the electoral system is first-past-the-post, the only real competition is between the two largest parties. And never before has there been so much support for the opposition.

The four main opposition parties formed a loose alliance after they staged a joint walk-out of the constitutional negotiations earlier this year. This alliance, Ukawa, was born on a wave of outrage at the outright rejection of a constitutional draft that, among other things, proposed a more clearly defined three-government solution with Zanzibar, granting the isles more autonomy. Ukawa has enjoyed an unprecedented amount of popular support.

However, CCM is still powerful and is still everywhere.

It is now also fully awake to the real challenge it is facing, and will certainly fight tooth and nail to keep power. A zealous campaign has been set in motion. Roughly put, the campaign strategy ambulates between demonstrating that John “Hercules” Magufuli and his running mate Samia Hassan Suluhu are just people like you and me, and, alternatively, telling people in subtle – albeit really quite menacing – ways what will befall them if CCM doesn’t win. Yet, at the same time, CCM supporters keep reiterating how the elections will be peaceful and that there will be no repercussions for opposition voters. This odd combination of statements is slightly unsettling, kind of like a lion tamer that keeps insisting his lion will definitely not jump up into the stands and tear your grandma limb from limb.

That last one didn’t really happen, but give it a couple more weeks. 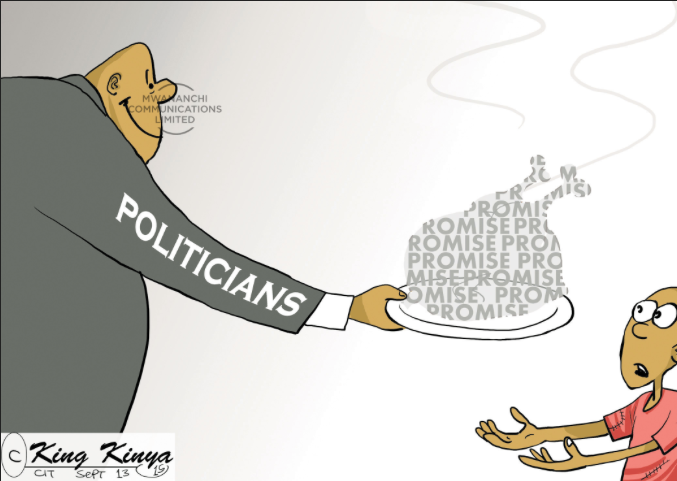 Moreover, the campaigns are becoming more focused on the characters of the candidates and less on the issues. The opposition alliance has barely mentioned the constitution despite it being the main reason the alliance exists at all, while CCM has tellingly changed its slogan from ´vote CCM´ to ´vote Magufuli´.

This lack of real issues is becoming a problem and it is sad that Tanzania is losing out on a great opportunity to have an inclusive conversation about gender, oil and gas, mining, and most importantly, what the new constitution should look like. Voters are paying more attention to politics than usual, the world is watching, civil society is ready to go, journalists and academics are poised for debate…and what are they getting? Unfeasible promises, character assassinations, and a middle-aged man doing push-ups.

Marta Tveit is a Tanzanian/Norwegian writer and researcher, currently keeping a close eye on the Tanzanian elections.

[Amendment: The push-ups section has been amended to include the fact that the hashtag was used by CCM supporters as well as opponents.]