Trouble on the White Nile: What the barge kidnapping reveals about the UN in South Sudan

When UN peacekeepers were detained crossing the river in a tense area, the response from UNMISS was slow and uncertain. 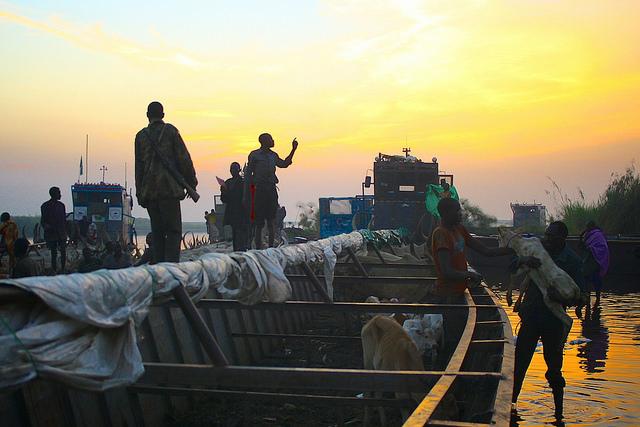 Crossing the Nile in South Sudan. Photograph by Grace Cahill/Oxfam.

Last Monday, three barges hired by the United Nations Mission in South Sudan (UNMISS) left a UN base in Malakal, Upper Nile state, on the government-controlled east side of the river. The barges carried fuel meant for an UNMISS base in Renk further north and on board were a group of international peacekeepers and a South Sudanese crew.

When the barges reached Kaka, an outpost on the rebel-controlled West Bank, 100 heavily armed men under the command of Major General Johnson Olony stopped the boats, detained the crew, disarmed the peacekeepers, and offloaded the cargo of 55,000 litres of fuel, according to the UN.

Olony’s spokesperson claimed the men on board included SPLA and National Security Services agents, and said they would treat the captives “like criminals” to let the world know that UNMISS was colluding with the government. He indicated the collusion was local – a deal with the SPLA and lower-level UN folks. The hostages feared for their lives and may have been directly threatened.

The SPLA denied the presence of any of their men on the boat, saying they requested to have a soldier on board “for transparency” but were rejected.

Three days later, UNMISS evacuated 18 peacekeepers, including 16 infantry and two Military Liason Officers. On Sunday, 13 South Sudanese contractors were released, along with the three barges. But the rebels have kept the fuel, worth perhaps hundreds of thousands of dollars, seven peacekeeper weapons, an inflatable boat, and communications equipment.

The whole incident seems a successful and largely unchallenged looting of UNMISS, evidence that the mission is unable to protect itself from armed groups. The saga also shines a light on the few favours the mission does for itself due to its own apparent sloppiness.

UNMISS has three main bases along the river in Upper Nile, all on the government-controlled east side. These are at Malakal, which is now a ghost town, Melut, near the Paloich oil fields, and Renk, near the Sudanese border.

On the west bank are the Agwelek forces of the Collo (Shilluk) people commanded by Olony. The Agwelek comprise the rebels’ strongest forces, the only ones which have posed any threat to gain ground from the government in the last year.

The government has likewise placed its strongest forces on the east side, including a fleet of attack helicopters – the most advanced military hardware in South Sudan – at Paloich. The oilfields around Paloich are the source of nearly all government income.

Animosity across the Nile is personal. Many in the SPLA hold a grudge against Olony, who fought with the government for over a year only to defect to then rebel leader Riek Machar’s side and take SPLA-bought weapons with him.

Olony’s side is fuming because of President Salva Kiir’s recent order to divide the country into 28 states, which shunts the Chollo onto the West Bank while Malakal and other areas they claim are merged into states populated by other groups.

So, when UNMISS sent its barges from Malakal last Monday, they were navigating a frontline between the rebels’ best troops and the governments’ best troops at a time of high tension.

To make matters worse, neither side trusts the UN much.

Olony’s forces have long had problems with UNMISS, dating back to poor relations before the current civil war, according to International Crisis Group analyst Casie Copeland.

The government, meanwhile, maintains that UNMISS is protecting rebels inside their UN bases where about 200,000 people are sheltering nationwide. The government has previously accused the mission of transporting weapons to the rebels.

Civilians and staff of UN agencies have been killed or kidnapped in and around its bases on many occasions.

Further, the river itself is a flashpoint. Both sides have used barges to launch attacks on the other. The barge company used by the UN is said to be used by the SPLA too, which creates confusion. Earlier this year, the government shut down river traffic, reportedly to stop the rebels from launching attacks and to starve out the Collo.

Into this toxic mix, UNMISS sent 55,000 litres of fuel, protected by 16 armed men. After the barges’ capture, both sides’ suspicion grew.

The SPLA quickly became suspicious that UNMISS was bringing goods to the rebels because UNMISS kept quiet about the incident. It wasn’t until Thursday 29 October, after media had reported the story and three days after the capture, that UNMISS made an official statement. To the SPLA, seeing UNMISS cargo barges cross to the West Bank and stay there for three days without explanation looked like the blue helmets were helping Olony.

Why did it take so long to say something? One hopes this was a decision made given the delicacy of the hostage situation.

But it may also have to do with UNMISS’ public relations strategy which often favours silence. Getting information from UNMISS is rarely easy, and I’ve seen the mission try to suppress leaks of information about threats to the mission and the civilians under its care. Indeed, this wasn’t the first time UNMISS in Malakal responded slowly or quietly to kidnappings by Olony’s forces.

Another reason for the silence may be internal UNMISS disorganisation. High-level UNMISS officials didn’t know about the incident until Thursday, African Arguments was informed, even though the news was in Juba by Tuesday latest and circulated among NGOs Wednesday. It is well known that some foreign battalions in UNMISS prefer to act by themselves following orders from their capitals, perhaps leading to communications breakdowns.

But UNMISS’ lack of information for days may also be because the mission apparently still doesn’t know who was on the barges when they left Malakal on Monday.

Notably, one UNMISS spokesperson stressed to me that the 13 contractors were the people verified. So are there more hostages in Kaka left behind? Neither side says this is the case, but the fact that UNMISS didn’t have its numbers straight until almost a week into the saga points to dangerous sloppiness, especially because the central allegation by Olony’s forces was that government agents were on board.

UNMISS is still unable to deny these allegations. According to a spokesperson, speaking Monday: “We don’t have any reason to believe that any [government personnel] was on board, but there was some information we received from the ground that the IO came and found some government identification. We don’t know where they got that from or why they got them, but an investigation is being taken into it, into the whole situation.”

We’ll wait and see what UNMISS finds, if the mission makes their findings public. UNMISS never released the results of an investigation into the killings of people in and outside its Malakal base in February 2014. We’ll also see if Olony’s side is able to produce proof for their allegations.

Ultimately, UNMISS got its 31 workers out safely, and did so apparently by talking tough, albeit after some days. UNMISS chief Ellen Loj was adamant the kidnapping was an attack on the UN and may constitute a war crime. New York stressed rebel leader Riek Machar’s supporters command responsibility. Olony’s spokesperson admitted to African Arguments that the 13 contractors were released “to avoid more intimidation” from the UN after Machar spoke to Olony.

This itself is a departure from the norm. Rarely in South Sudan do we hear of armed groups being intimidated by UNMISS, or of local generals adhering to long chains of command. But I doubt Olony feels insecure right now, sitting on top of 55,000 litres of fuel.

In the Upper Nile, UNMISS faces unbelievable challenges. Running a tighter ship and having a more aggressive communications strategy might make those challenges a little less insurmountable.

Jason Patinkin is a freelance journalist living in Juba, South Sudan. Follow him on Twitter at @JasonPatinkin.