South Africa’s local elections: reasons for each party to be happy and sad

The ANC, DA and EFF each came away with some positives and some negatives.  But one thing is clear for all of them: South Africa’s era of one-party dominance looks to be ending. 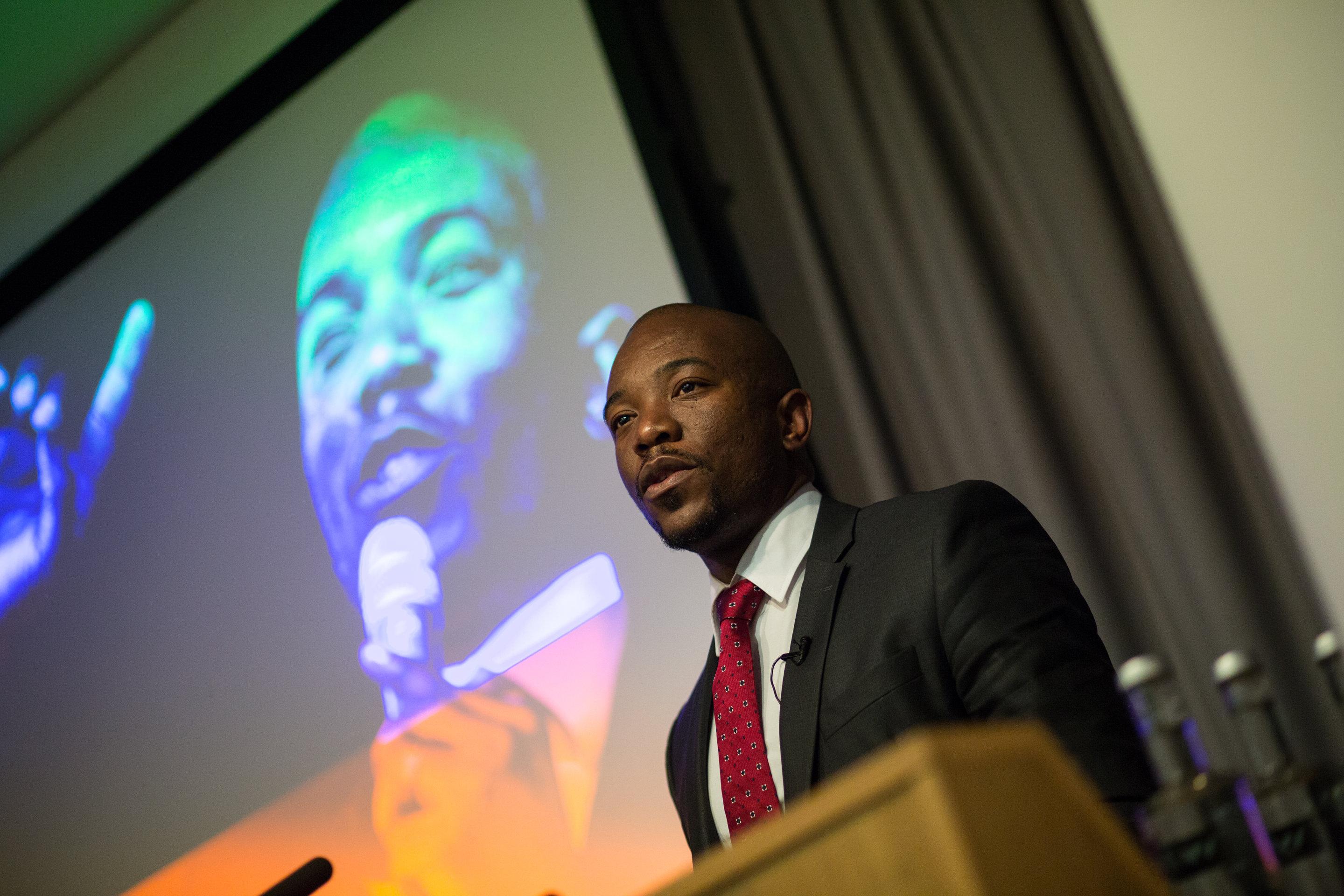 As predicted by many, the 2016 local government elections in South Africa have been the most competitive yet in post-apartheid South Africa. For the first time, the governing African National Congress (ANC) saw its majority drop below 60% as it lost control of a number of municipalities, including in some of South Africa’s major cities­­­­.

Meanwhile, the main opposition party, the Democratic Alliance (DA), reached almost 27% nationwide. This was its best performance yet and the highest share of the vote attained by any opposition party since 1994.

The third biggest party, the Economic Freedom Fighters (EFF), managed a fairly respectable 8% of the national vote, and has emerged as the second biggest party in most municipalities in Limpopo province and the platinum belt towns in North-West province.

Although this election may seem to have been a disaster for the ANC and a triumph for the opposition, the results show a more nuanced picture. Here are some positives and negatives the main parties can take away.

It also saw its vote share in KwaZulu-Natal increase, and although its vote share decreased in eThekwini (Durban), the biggest city in that province, it was still easily the biggest party there as well as in Mangaung (Bloemfontein) and Buffalo City (East London).

The party’s vote share was its lowest yet at 53.9% – down from 62% in 2011 – and its performance in five of the eight major cities was a disaster. The ANC barely managed a quarter of the vote in Cape Town, was outpolled by the DA in Tshwane (Pretoria) and Nelson Mandela Bay (Port Elizabeth), and was brought down to below 50% in Johannesburg and Ekurhuleni (East Rand).

The party also had a disastrous campaign in the Western Cape, a province where it traditionally performed reasonably well in the province’s eastern, rural municipalities. In this election, it did not win any Western Cape municipality outright, and was the biggest party in only two. Its overall vote share in the province declined to 26%, down on previous local elections when it regularly polled above 30%.

[See: Podcast: Are South Africa’s local election results the beginning of the end for the ANC?]

The real winner of this election was the DA. It won more than a quarter of the national vote – 26.9% compared to 23.9% in 2011 – and is now the biggest party in three of South Africa’s largest cities. It secured nearly two-thirds of the vote in Cape Town. It is the largest party in Nelson Mandela Bay and Tshwane, where it will likely be the senior partner in coalition governments. And it pushed the ANC hard in Johannesburg, managing just under 40% and finishing only a few percentage points behind the ANC.

It also had a strong performance in Ekurhuleni, Gauteng’s third major city, where it won nearly 35%. It won nearly every council in its Western Cape stronghold, won another off the ANC in the Eastern Cape, and increased its majority in its Midvaal council in Gauteng. Results also seemed to indicate that the DA – seen by many as a ‘white’ party – made inroads among black voters in urban areas.

Although the DA has secured a number of beachheads outside the Western Cape, the party will be disappointed with its performance in some areas. The Northern Cape has long been identified as an area with potential for growth, but the DA failed to make significant inroads in municipalities there. The ANC remained the biggest party in each of the province’s municipalities, and the DA’s overall provincial support increased only marginally, from 22% in 2011 to 25% in 2016.

The party’s performance in Limpopo and North-West will also be of some concern. The party was regularly beaten into third place by the ANC and the EFF in these provinces. Its overall provincial vote share – as compared to 2011 – also dropped in Mpumalanga and the North-West. In KwaZulu-Natal the party had impressive growth in some areas, but will be disappointed by a fairly mediocre showing overall, gaining 15% in that province. Overall, the party’s vote share remained fairly stagnant outside the primary urban centres.

The EFF managed 8% of the vote, a very good performance for a party only three years old. It emerged as kingmakers in Tshwane, Johannesburg, and Ekurhuleni, and may serve as a junior coalition partner in each of those cities.

The party also broke something of a South African political curse. New parties tend to fare worse in their second election – the Congress of the People, the United Democratic Movement, and the Independent Democrats all serving as examples – but the EFF bucked this trend.

It will be happy with its performance in Limpopo and North-West too, where it was the second-largest party in most municipalities. Its best performance was in Polokwane in Limpopo, the hometown of its leader, Julius Malema, where it won nearly 30% of the vote.

The EFF will likely be disappointed with its overall performance. Malema had announced that the party was targeting 18% of the national vote, and its performance was not significantly better than in the 2014 national election when it won 6.4% of the vote.

It will also be disappointed with the fact that it did not emerge as the single biggest party in any municipality. As in 2014, it also failed to win significant support in the south of the country, with the EFF remaining a primarily northern party.

The return of the Inkatha Freedom Party

These elections saw something of a comeback for the Zulu nationalist Inkatha Freedom Party (IFP), which won six councils outright in KwaZulu-Natal. For the first time, it also saw its vote share increase from a previous election as its vote in KwaZulu-Natal increased from 15% in 2011 to 18%.

Its comeback is partly due to the decision by the Electoral Commission to prevent the National Freedom Party (NFP) from participating because of late payment of fees. The NFP, which had broken away from the IFP in 2011, siphoned off much of the latter party’s support in 2011 when it won 10% of the vote in KwaZulu-Natal. The NFP had officially endorsed the ANC in this election, but it seems at least some of its voters returned to the IFP.

The National Union of Metalworkers of South Africa (Numsa), a former trade union ally of the ANC, launched its own political party, the United Front, to contest the local government elections in a number of municipalities, most notably Nelson Mandela Bay. Although the new organisation was expected to make some impact there, it secured only one seat and failed to make significant inroads in other areas where it fielded candidates.

Overall, the election showed the resilience of democracy in South Africa. The ANC has been magnanimous in defeat, and has accepted its electoral setback with good grace. It remains to be seen whether the party takes this opportunity to begin to look to remove President Jacob Zuma or whether he will work to further entrench his position.

The DA will be the party that is most pleased and has shown that it is now a real contender outside of its Western Cape stronghold. It will be confident of being the biggest party in Gauteng in the 2019 general election and of seeing its national vote share reach 30%.

Conversely, the EFF has its work cut out. It will be part of a governing coalition in at least some municipalities and it will have to show sceptics and supporters alike that is capable of governing and that it can implement its manifesto.

South Africa’s era of one-party dominance is ending. Multi-party and coalition politics may be closer than many people expect.

Marius Roodt is a researcher at the Centre for Development and Enterprise in Johannesburg.

Marius Roodt is a writer and editor based in Johannesburg. His interests include South African and African politics. He holds degrees from the Rand Afrikaans University (now University of Johannesburg) and the University of the Witwatersrand.