Many Igbo feel politically and economically marginalised, and the government’s hardline stance is not helping. 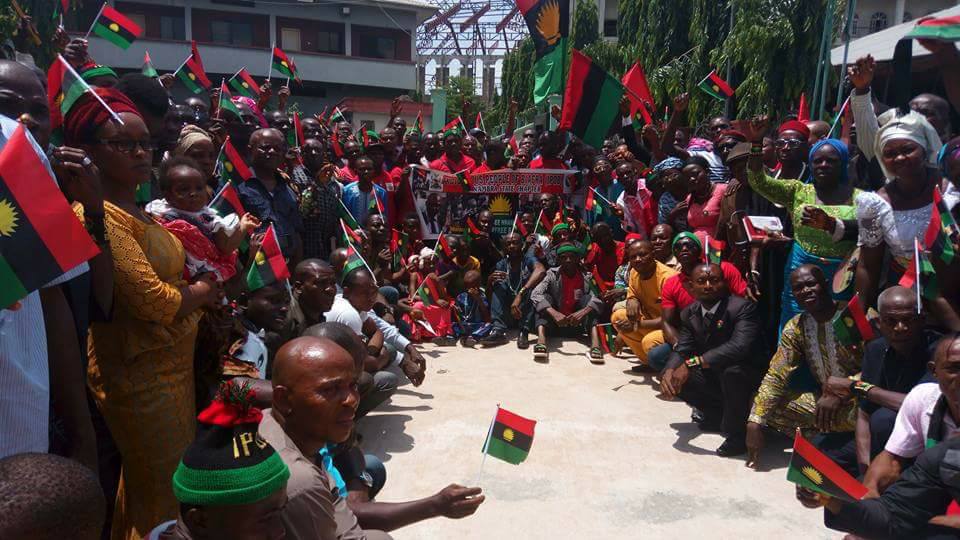 50 years after Nigeria’s then Eastern Region declared itself the Republic of Biafra, sparking a brutal and costly three-year civil war, the country again faces a separatist challenge. Across the Igbo south east, there is resurgent agitation for an independent Biafra state.

President Muhammadu Buhari’s forceful response to the agitation has been counter-productive, inflaming passions and boosting separatist sentiments. The government needs to change course and prioritise dialogue over coercion.

The starting point of any response is to understand the agitation’s roots. They include political and economic grievances, a deep sense of collective victimisation among the Igbo, and the failure of south east politicians to provide good governance and development.

Roots of the agitation

Separatists contend that since the Biafra War, the Igbo, one of the country’s three major ethnic groups, have been marginalised. They note that no Igbo has been elected to lead the country since Nnamdi Azikiwe’s ceremonial presidency in the 1960s or to be vice president since Alex Ekwueme (1979 to 1983).

This persisted even under military rule. The only Igbo head of state in this period, Major General Johnson Aguiyi-Ironsi, was killed after only seven months.

Administrative structures decreed by northern-led military governments have also undermined the region. Of the country’s six geo-political zones, all but the south east contain either six or seven states. The south east has just five, while it accounts for only 96 of Nigeria’s 774 local governments. Representation in government and the flow of federal resources are based on these administrative units.

Today, the south east, like much of the country, suffers deficient and dilapidated infrastructure and widespread youth unemployment. But many believe this is structural. They point out that as federal revenue allocation is based on number of states and local governments, the south east receives the least of all zones.

Under Buhari, political grievances have deepened. With no Igbo heading any of the military and security services, many argue the region has no voice in key organs such as the National Defence Council (NDC).

“We are like second class citizens, of the same status as a colonised people, except that this is internal colonialism, caliphate colonialism”, asserted a retired Igbo military officer.

To many in the south east, who mostly voted for former president Goodluck Jonathan, that statement raised fears that the president would not accord them equal treatment with the north.

They now see their fears confirmed by some government actions. For example, when the domestic intelligence agency the Department of State Services recruited recently, it hired just 44 new employees from the south east compared to 165 from the north west. Similarly, the south east is nearly completely excluded from a proposed national railway development plan.

Along with political and economic grievances, separatist agitation is driven by a strong feeling of collective victimisation. In 1949, the prominent Igbo leader Nnamdi Azikiwe asserted “it would appear that God has specially created the Ibo people to suffer persecution and be victimised because of their resolute will to live”.

Almost 50 years later, another distinguished Igbo, Chinua Achebe, claimed that “Nigerians of all other ethnic groups will probably achieve consensus on no other matter than their common resentment of the Igbo”.

These feelings have been deepened over the decades by recurrent rioting in the north in which Igbo have suffered great losses. Mostly notably, over 30,000 Igbo in the north were killed and two million fled back to the south in 1966 in the “Igbo pogrom” that followed the January coup and July counter-coup.

During the Biafra War, all other groups rallied round the federal government. The conflict killed about two million people, mostly Igbo, and more died during post-war riots and conflicts in the north.

Some northern leaders have argued that the Igbo were targeted because of their entrepreneurial success not their ethnicity, but such explanations offer no consolation. As one Igbo civil society leader said, the current separatist agitation is “a rejection of the Nigerian state by a group that feels already rejected by that state”.

As the president-general of the apex Igbo socio-cultural organisation, Ohanaeze, Nnia Nwodo said, Igbo youth “have passed a vote of no confidence in us their fathers”. The agitation therefore represents not only a protest against the state but a rift within Igbo society.

Successive government responses have been generally intolerant and combative. The government generally lumps the separatist movement together with Boko Haram and the militant Yoruba group the O’odua People’s Congress (OPC) as “extremist groups” threatening national security.

Under President Olusegun Obasanjo, the administration arrested the leader of the Movement for Actualization of the Sovereign State of Biafra (MASSOB), Ralph Uwazuruike, charged him with treason and detained him from 2005 to 2007. Police clashed with MASSOB members repeatedly, killing many.

President Buhari’s government has been similarly intolerant. In November 2015, he issued a “serious warning” that: “The corporate existence of Nigeria as a single entity is not a subject of debate and will not be compromised”. On another occasion, he said: “For Nigeria to divide now…it is better for all of us to jump into the sea and get drowned”.

Following from this hardline stance, security agencies shut down the unlicensed radio station, Radio Biafra, operated by the separatist group Indigenous People of Biafra (IPOB). They have banned pro-Biafran newspapers, arresting and brutalising non-compliant vendors. These measures have driven many publications off the streets, but have not curbed the even more vigorous social media.

Security agencies have also broken up rallies and meetings, killing and arresting scores. An Amnesty International report alleged that security forces murdered at least 150 agitators between August 2015 and August 2016. The army rejected the report, but separatists say the number of deaths was even higher.

In January 2017, when agitators organised a rally in “solidarity” with new US President Donald Trump, police reportedly killed 11 participants and arrested more than 65. Many are still in jail.

The government also arrested IPOB leader Nnamdi Kanu in October 2015. He was arraigned and granted bail, but despite court orders for his release, he was held in prison until April 2017. Kanu’s prolonged detention turned him into a hero and increased IPOB membership.

Outlook for the future

The agitation’s future trajectory is unclear. Much depends on the federal government. Further repression will earn the separatists more local sympathy and support and could push them to more desperate actions. If there is no progress towards constitutional, administrative and policy reforms that would respond to the demands of the south east, the agitation could escalate.

Nobel laureate, Wole Soyinka, has counselled the government to ask the agitators: “What are those things we can do to make you content, to make you feel part of this entity [Nigeria]… What can we do to make them feel that they belong and are not alienated?”  The federal government should heed that sage’s advice.

In the short term, the government should refrain from further threats of “crushing” the agitation and free unconditionally the hundreds of protestors currently imprisoned. It should also reassure all regions it will allocate resources and develop infrastructure equitably.

In the longer term, the National Assembly should resume its stalled constitution review and pass provisions that would guarantee all citizens a stronger sense of national belonging and redress the imbalance in administrative units between the zones. This is a key demand of south easterners and one already endorsed by the leaders of most other zones.

The leaders of the south east must also respond to their region’s needs by focusing on economic development and curbing massive youth unemployment. The south east governors’ recent initiative towards integrated regional development is a welcome step that should be pursued vigorously.

50 years after the south east attempted to break away, the country remains fragile. Its democracy is still unstable, as demonstrated by the recent coup rumours as President Buhari is reportedly very ill.

At a 25 May colloquium on Biafra: 50 years after in Abuja, Acting President Yemi Osinbajo said the greatest responsibility of Nigerian leaders today is to give a pathway to unity in diversity. The country’s leaders must work harder to build bridges, close cleavages, and achieve a more cohesive country.

If they fail, separatist agitations will grow even stronger.