Popular musician Bobi Wine’s landslide victory was about more than just his fame. 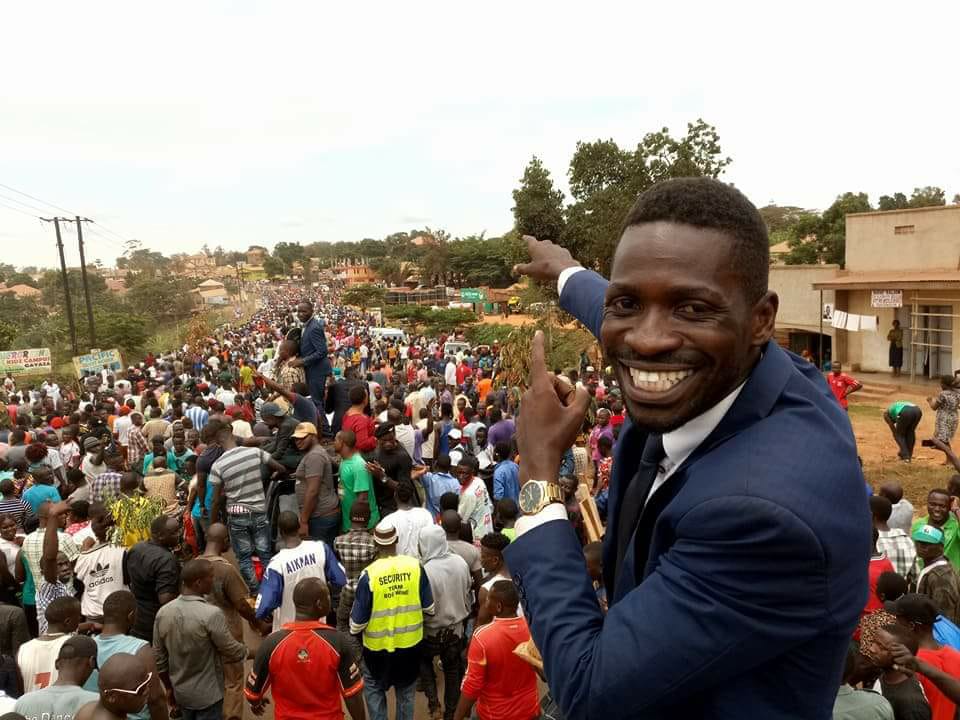 By the close of business last Thursday, Kampala was in an uproar. Robert Kyagulanyi Sentamu, a 35-year-old Ugandan musician-turned-politician better known as “Bobi Wine”, had won the parliamentary seat for Kyaddondo East. His landslide victory, with around 80% of the vote, brought to an end a dramatic month of intensive campaigning in the small constituency on the outskirts of the city.

The seat fell vacant after a losing candidate in the 2016 elections, the ruling National Resistance Movement’s (NRM) Sitenda Sebalu, filed a suit that successfully overturned the victory of his opponent, Apollo Kantinti of the opposition Forum for Democratic Change (FDC). When a by-election was called, Kyagulanyi put his name forwards.

His entry into the race was the game-changer. Bobi Wine’s fame in the entertainment industry, cultivated over the past 15 years, became the focal point of the campaign, overshadowing both his manifesto and those of his opponents.

When the country’s music industry, dominated by Congolese music in the 1990s, started adjusting to indigenous Ugandan music in the early 2000s, Bobi Wine’s voice was among the first to hit the airwaves. The quickly thriving industry propelled him and a few other local musicians to stardom, turning them into millionaires overnight. Over the years, his music took an increasingly political tone as his songs critiqued government excesses and defended the poor, cementing his image as a spokesperson for the discontented urban youth.

The meteoric rise of the “ghetto president”, as he is known among his slum peers, would come to symbolise the possibilities open to Ugandan youth amidst tough economic times and a decadent political system. When he announced his candidature in May, therefore, his victory was virtually guaranteed. His rags-to-riches story and his politically-themed music was bound to appeal to Kampala’s youthful and opposition-leaning electorate.

However, this by-election, which captured national imagination and attracted bigwigs on both sides of the political divide, is more significant than what the media – preoccupied with Bobi Wine’s celebrity status – tends to suggest. The poll speaks volumes about the future of the ruling NRM regime, the quickly changing dynamics of the electorate, as well as the preparedness of the opposition to take over the reins of government.

Chaotic elections are the new normal

The ugly scenes that have lately become central to politics in Uganda were seen again. As in the 2016 presidential and parliamentary elections, the Kyaddondo East by-election was full of arrests, violence, claims of vote-rigging, and heavy deployment of security forces.

Bobi Wine himself was arrested just a few days prior to the election, and there were various reports of pre-election clashes. On D-day itself, voting kicked off peacefully by 8am, but tales of rigging, detentions and police violence had started surfacing by noon, and intensified till voting closed in the evening.

That it has become almost impossible to witness a chaos-free election in Uganda is a sad commentary on the state of democracy in the country. It testifies to the NRM’s determination to bypass democratic institutions and processes to survive.

The opposition is still unable to unite

The by-election exposed the high degree of disorganisation within Uganda’s opposition. The contest was widely seen as one between the opposition − represented by the FDC’s Apollo Kantinti and the independent but Democratic Party-leaning Bobi Wine − and the ruling NRM’s Sitenda Sebalu.

But the opposition could not agree to front a single candidate in a constituency where the NRM was widely expected to rig. In fact, some key opposition figures found themselves in an awkward position unable to publicly campaign for either candidate.

If it hadn’t been for Bobi Wine’s overwhelming popularity, the NRM could easily have taken advantage of the divisions within the opposition and, indeed, tried to do so.

This failure of coalition-building – which has antecedents in the failed Inter-Party Cooperation (IPC) of 2001 and the defunct The Democratic Alliance (TDA) of 2016 – may not have been costly in this instance, but could raise its ugly head again in future with potentially disastrous consequences to the opposition.

The youth are a force to be reckoned with

The by-election also sent a positive message − that Ugandan youth are rising up to take their country’s mantle of leadership. Bobi Wine’s voters mainly comprised of urban youth that were born after President Yoweri Museveni first took power in 1986.  This demographic has grown up with the discontentment of watching high-profile scandals involving high-profile government officials – the so-called ‘historicals’ that fought in the bush war – and seem to be determined to make a difference in the governance of their country.

In many respects, the rejection of the NRM candidate in the by-election was a protest vote by this younger generation against what they perceive as an older, corrupt and inefficient breed of leaders.

Of course, the Ugandan parliament is not a place that inspires much optimism; the house is over four hundred members strong, with more than three quarters of them belonging to the NRM and only a handful of legislators below the age of forty. The opposition and the youth are thus badly outnumbered, and Bobi Wine’s influence will not prevent the NRM’s agenda from passing on the house floor.

Nevertheless, the people that have catapulted the young musician to the legislature are a constituency to watch. For it is this ragtag, city-based, unemployed youth that will likely to determine the commencement and direction and of a post-Museveni era − whether through the ballot box or not.

Michael Mutyaba is a writer on African politics. You can follow him on twitter at @michael_mutyaba or email him on [email protected]m.