Africa’s battle against malnutrition can be won. These 4 principles will help.

A quarter of the world’s malnourished population is in sub-Saharan Africa, but there have been some notable successes. 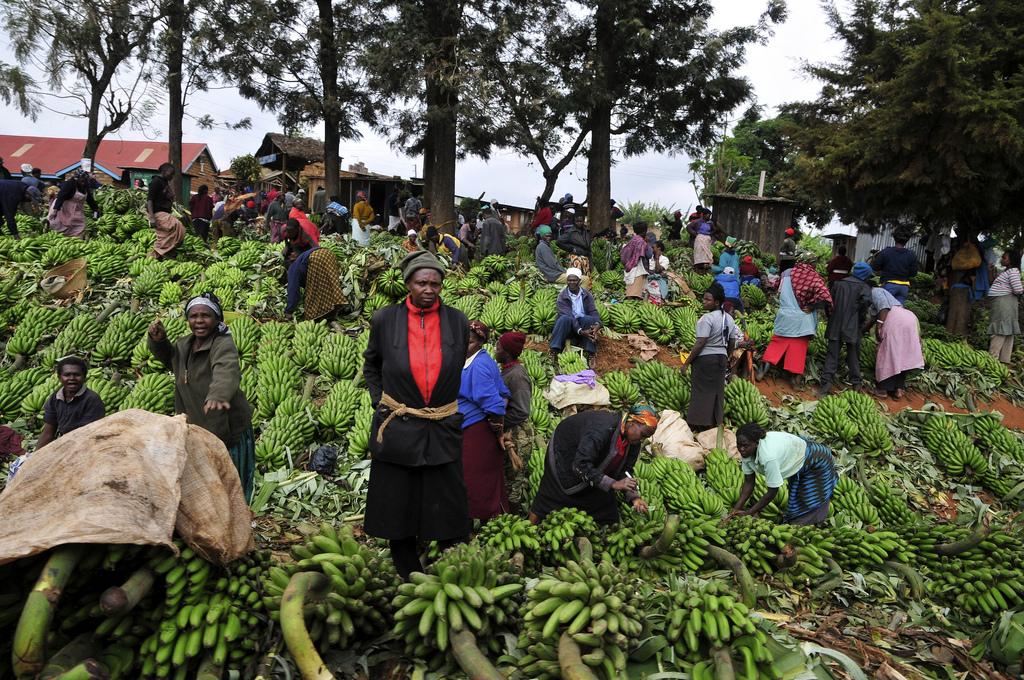 At a banana market in Kenya. Credit: CIAT.

The battle against malnutrition in Africa can be won. We know this because several African countries have already reduced malnutrition by 40-60% in the last 15 years. Senegal, Ghana and Rwanda have cut the number of undernourished people and wasted and stunted children by more than half.

However, there remains a lot of work to do. In sub-Saharan Africa, 224 million people are still malnourished. That’s a quarter of the global total. In order to meet the commitments of the 2014 Malabo Declaration to halve poverty and end hunger by 2030, African countries will have to build on past progress and work harder to reach those being left behind.

We already have some useful insights about what works in this fight thanks to the achievements of different countries and regions. With the need to replicate and scale up these successes in mind, and as we co-host the inaugural meeting of the Malabo Montpellier Forum this week, here are four things we think African governments need to do to pave the way to a well-nourished future for the whole continent.

1) Make nutrition a priority to break the vicious cycle

Governments across Africa need to put nutrition at the top of their political agenda. Not only for the sake of people suffering from hunger, but for the sake of better long-term economic outcomes.

For every $1 invested in nutrition, $16 is generated in increased economic output. If a country’s population is beset by serious nutritional problems, the knock-on effects are widespread and pernicious. Under-nutrition affects labour productivity, education outcomes, cognitive development, inequality and growth.

And it’s a vicious cycle. Slow economic growth deepens poverty and dampens productivity. This in turn affects people’s ability to earn money to buy food they need to be healthy and productive. Lack of adequate nutrition leads to poor physical performance and limited cognitive capacity.

In each of our home countries, Benin and Malawi, malnutrition fell by 40% between 2000 and 2016, although rates in Malawi are still above the 30% threshold that signals “high malnutrition”. Both governments implemented high-level national strategic plans to tackle malnutrition. These mandated coordination between government ministries and departments, and between the public and private sector and civil society. These plans drove the improvements.

In Benin, for example, the Ministries of Agriculture and Health collaborated to implement food security initiatives and nutrition surveillance. They also promoted breastfeeding, which has been shown to have the single largest potential impact on child mortality of any preventive health intervention.

In Malawi, the government assessed the types of food lacking in people’s diets and encouraged farmers to grow crops to fill those gaps. It gave incentives to small off-farm businesses to support the production of these goods. The government assisted more than 90,000 farmers to plant soy, taught households how to process nutritious soy-based foods, and connected them to growing domestic and regional markets.

Many countries in Africa have predominantly rural populations. Leaving these areas out of plans to tackle malnutrition means leaving millions of people behind. Remote villages often suffer from food shortages, partly because they are inaccessible, but also because they are particularly susceptible to the effects of climate change.

Governments need to learn from businesses and NGOs that have worked out ways to get medicines and other products out to the “last mile” and hard-to-reach communities. Coca-Cola, for example, has developed sophisticated supply chains that can enable health partners to get vital supplies to vulnerable people.

Making the most of networks and expertise that already exist also works. In Benin, in rural communities where child malnutrition rates are particularly high, the government has trained 12,000 elderly women to support the healthy upbringing of young children. The elderly women educate remote communities about nutrition and the value of local foods and hygiene. This also reinforces their positions as traditional leaders in the community.

4) Learn and share lessons about what works, and why

We must make the effort to share, in the spirit of continental cooperation, evidence about the interventions that work. We must also be open about the new challenges we face.

In Malawi, for example, we are facing increasing levels of childhood obesity. An estimated 5% of children under five are now considered overweight. This is not a phenomenon restricted to our country, and so we need to talk about it with our peers and share strategies for tackling the new trends.

We have learnt that dealing with malnutrition is not only a matter of addressing a lack of food but also a lack of knowledge about how to prepare food and eat a balanced diet. Approaches to tackle malnutrition need to blend strategies on food production, processing and preparation and understand the role markets play. We know that with resourcefulness and imagination, we will be better placed to make a real difference for our populations – and in doing so, improve the continent’s prospects as a whole.

Since removal of sanctions, Sudan’s economy has ...