How and why the US should intervene in Kenya

The Kenyan government is launching an assault on the rule of law. External partners are needed to help change this trajectory. 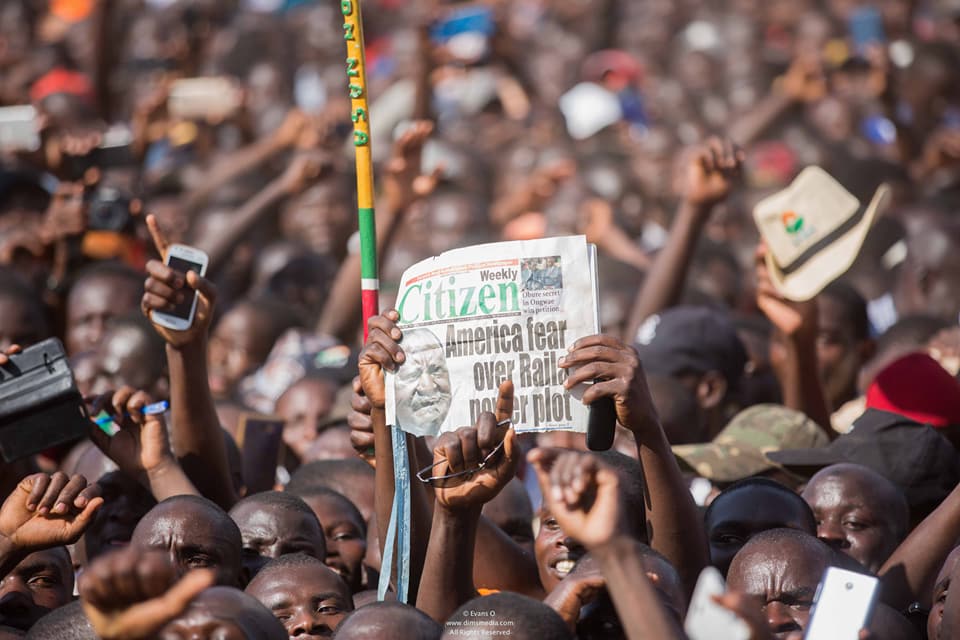 At an opposition rally in Homa Bay, Kenya. Credit: NASA.

Kenya is currently sliding towards two worrying scenarios: political chaos and possible inter-communal violence; and/or an authoritarian crackdown that could cripple its young democracy.

The desire within Kenya to change this trajectory is palpable. Yet the ruling Jubilee party and opposition National Super Alliance (NASA) are digging in on opposite sides of a widening partisan divide. Appeals for calm and respect for the rule of law by Western governments have had little effect thus far.

President Uhuru Kenyatta and opposition leader Raila Odinga each command roughly half the electorate. Most analysts calculate that the incumbent probably won the August 2017 election, but the Supreme Court ruled that serious irregularities made it impossible to determine. The Court ordered another election be held. This move was celebrated across much of Africa as symbolic of judicial independence.

In the run-up to that October re-run, Jubilee supporters waged an onslaught against both the courts and the Independent Elections and Boundaries Commission (IEBC). Judges were threatened, with one surviving an assassination attempt. IEBC commissioners were menaced or offered bribes. One commissioner fled Kenya after receiving death threats, while the memory of IEBC official Chris Msando’s torture and murder days before the August poll remained clear in many people’s minds.

In the end, Kenyatta won the vote, which the Supreme Court promptly validated. However, voter turnout was only 38%, partly because the opposition boycotted the race, claiming it would not be credible.

Convinced Odinga had been “rigged out” of the presidency for the third time in a decade, NASA launched a campaign of national “resistance”. Its supporters called for new elections, organised mostly peaceful (but disruptive) protests and boycotts, and flirted with the idea of a creating a parallel governing authority. A theatrical swearing-in of Odinga as the “people’s President” was held on 30 January. Some NASA militants called for secession.

Today, the protests are continuing and risk escalating into inter-communal violence. A more imminent risk, however, is that harsh Kenyan government crackdowns on what is increasingly a forlorn campaign could lead to this same outcome. Detaining Odinga, for example, would ignite passions that would be hard to control.

The harsh reality for NASA is that it has no legal basis and few realistic options for continuing to dispute Kenyatta’s legitimacy. Meanwhile, the president’s control of the executive, comfortable parliamentary majorities, command of government resources, loyalty of the security forces, and broad international support mean his standoff with Odinga is very unequal.

Given this imbalance, the fury with which Kenyatta’s government has reacted to Odinga’s challenge is difficult to fathom. NASA officials have been harassed, threatened, detained, and deported. To block live broadcasts of Odinga’s “swearing in”, Nairobi’s three main TV stations were taken off the air and kept suspended for days afterwards in defiance of judicial orders.

More ominously, the government, including its Inspector General of Police, is routinely refusing to comply with court orders to release detainees, desist from illegal or unconstitutional acts, answer summonses, and enforce judicial decisions.

In effect, Kenyatta and his government are hitting back hard not just at Odinga and his supporters. They are also challenging the rule of law in ways that push executive impunity to an extreme not seen since the dark days of Daniel Arap Moi’s one-man rule. Kenya’s new constitution, which voters ratified in a 2010 referendum, was meant to be a bulwark against such excesses.

This political turmoil also affects the country economically. The current problems could disrupt trade, deter much-needed investment, and frighten away thousands of tourists who visit its beaches and game parks every year. It could also seriously impact regional economic activities. Kenya is East Africa’s most important regional transportation hub and its road, rail and air links provide an essential trade corridor for virtually every state in the area.

All this matters, or should do, to the country’s Western partners. This includes the US, the country for which both authors formerly served as ambassadors to Kenya.

Kenya is East Africa’s most dynamic economy. The American embassy in Nairobi and its aid programmes in Kenya are among its largest on the continent. Military-to-military links are long-established and strong. Polls consistently show Kenyans have a favourable view of America.

As was the case during the horrendous post-election violence of 2007, Kenya today needs outside assistance to help it alter course. Such help is unlikely to materialise unless the US uses its unique relationship with Kenya to catalyse an international response.

A key objective would be to prevent a descent into violence, but that is only half the job. The larger danger now is the threat to the rule of law posed by an increasingly imperious executive apparently determined to remove legal and constitutional restraints on its exercise of power.

Publicly shaming the Kenyatta government or threatening sanctions is not the answer. However, the US must make it crystal clear privately that there are limits to what the US can tolerate if it is to maintain its close relationship and that continuing to amass executive power unconstitutionally and flaunt the rule of law seriously tests those limits.

While the two countries may be valuable security partners, Kenya needs the relationship more than the US. The partnership is not a “get out of jail free” card for the Kenyatta government. Nor is it an excuse for the US to overlook Nairobi’s refusal to respect fundamental democratic norms.

Another message must also be delivered, both publicly and privately: that the US will continue, as it has for the past 30 years, to provide transparent support to non-partisan Kenyan groups seeking to strengthen democracy, combat corruption, hold government accountable, protect human rights, and uphold the rule of law.

Not too long ago, these were shared values. The US needs to hear now from Kenyatta and and his Deputy President William Ruto whether they still are.

On 6 March, Kenya’s Principal Secretary for Foreign Affairs Macharia Kamau responded to this article with the piece: US intervention in Kenya? No thanks.