Zimbabwe: Why President Mnangagwa never takes off his scarf

Activists’ use of #ThisFlag and the president’s use of #ThisScarf look the same, but they couldn’t be more different. A garment for all occasions: Zimbabwe’s President Mnangagwa has been weather his favourite scarf, in fair weather and foul.

Zimbabwe’s national flag has come back into political fashion recently – this time as a scarf. Since President Emmerson Mnangagwa rose to power last November, he has donned the colourful accessory emblazoned in green, yellow, red, black and white on countless occasions. He has draped the flag-scarf around his neck while giving public speeches, in high-level forums, when meeting foreign leaders, and even over protective overalls on a tour of a factory.

But it’s not just the new president. Other ministers have worn the scarf too in carrying out their national duties. The UK’s Ambassador to Zimbabwe, Catriona Laing, wore it on a visit to Downing Street. And the symbol has generated its own Twitter hashtag (#ThisScarf) and derisory handle (@ThatStupidScarf). In fact, Zimbabwe’s flag-scarf has become so ubiquitous in the past few months that it has effectively become a symbol of the country’s new post-Mugabe era.

President Mnangagwa has not commented publicly on whether there are hidden meanings behind the fashion statement. However, old photographs of former President Robert Mugabe and others wearing a very similar scarf in the 1980s have led some to wonder whether it is an old ZANU-PF ornament. If so, is Mnangagwa reviving it as a reminder of the party’s history of unity or perhaps as a coded message of defiance directed at his predecessor? 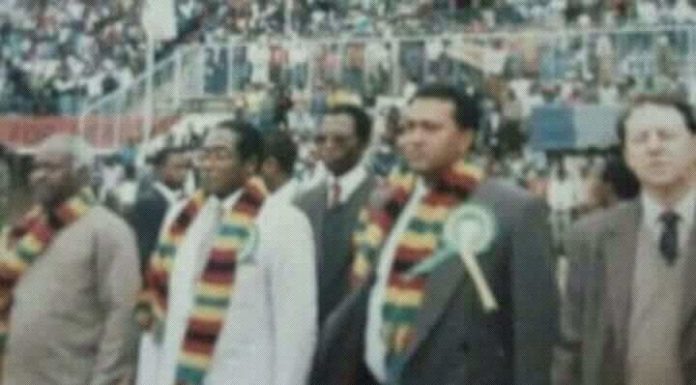 Other possible theories point towards a more recent episode when Zimbabwe’s flag took on a deep political meaning. In April 2016, days after Zimbabwe’s 36th Independence Day, Evan Mawarire, a little-known pastor, felt compelled to express his frustration with the state of the country. He turned on his camera, hung a flag around his shoulders and delivered an impassioned, sorrowful and inspiring sermon to it.

“Sometimes when I look at the flag it’s not a reminder of my pride and inspiration, it feels as if I just want to belong to another country”, he said, noting food shortages, corruption and repression. “[But] I must look at it again with courage and try to remind myself that it is my country”, he continued, before imploring viewers to take change into their own hands. “This flag. Every day that it flies it’s begging for you to get involved.”

Soon, the video went viral and, with that, the #ThisFlag movement was born. The government tried to ridicule the phenomenon with Minister Jonathan Moyo dismissing it as a “pastor’s fart” and calling its supporters “nameless, faceless trolls”. The regime further tried to paint it as a Western-funded initiative and started the vain counter-campaign #OurFlag.

And yet, the movement continued to gain momentum in a country known for its repression of dissent. Inspired by Mawarire’s message, activists organised large-scale non-violent protests including strikes and marches in which protesters donned the flag or its colours. Demonstrators emulated the pastor’s emotive use of Zimbabwe’s national standard, which quickly became a symbol of defiance.

Following a few tumultuous months of this, the justice ministry issued a statement warning citizens that anyone who brought the flag into “disrepute” would face jail time of up to six months or a $200 fine. In October 2016, an opposition MP Trevor Saruwaka, was refused entry to Parliament for wearing a jacket in the colours of the flag. The next month, police forcefully ejected another opposition legislator from Parliament for wearing a similar outfit.

In a short space of time, the #ThisFlag movement had fundamentally reshaped the country’s mindset with its assertion that Zimbabwe is for all Zimbabweans. It reclaimed the flag as a symbol of the nation rather than of the ruling ZANU-PF government. It emboldened citizens to redefine their national identity and challenged the notion that patriotism only means blind loyalty to the government. In the face of the state’s “business as usual” approach and dismissal of widespread legitimate concerns, it gave citizens an outlet for their hopes as well as their grievances.

This made #ThisFlag a real threat to the ZANU-PF, whose usual reflex of using force and arrests seemed inappropriate for such a broad-based movement. The government was frightened by the phenomenon’s wide and flexible appeal, its amorphous yet inclusive ideology, and its unpredictability. Many in power remembered only too well how potent a mass rejection of a repressive establishment could be from their own previous roles in Zimbabwe’s popularly-driven liberation from colonialism.

The government eventually took the wind out of the movement by targeting Mawarire, who went into exile following arrest, judicial harassment and death threats; but the image of Zimbabwe’s flag continued to signify defiance.

This may explain why President Mnangagwa has been so keen to defang this imagery and present a new “patriotic” symbol since he rose to office, adamantly wearing the flag-scarf even in 30 degree heat. The ZANU-PF stalwart was the Justice Minister when Zimbabwe’s legal system was unleashed in all its vengeance on Mawarire, but irony alone has not stopped him appropriating the very same strategy for which the pastor was punished and denigrated.

When Mawarire used Zimbabwe’s flag to express himself, the government accused him of bringing it into disrepute and of trying to “create chaos and disorder”. But now Mnangagwa has co-opted the very same imagery to mark Zimbabwe as being open for business, to rebrand ZANU-PF as a newly reformed party, and to add another layer of muddying meaning to the flag in this new era.

ZANU-PF has a long history of usurping national symbols and building false narratives, but it remains to be seen if it will be successful in this latest endeavour. Despite trying to change their rhetoric, the country’s “new” leaders are already struggling to break their habits of the past, ordering attacks on student protesters, dismissing nurses en masse for exercising their right to industrial action, and promising to liberalise the media only “after” elections.

It is too early to say whether Zimbabwe is truly on a new trajectory now that Mugabe has resigned. One thing that is clear from this recent battle over imagery though is that power is not evenly distributed in the country. All beings may be equal under the constitution, but the reality in Zimbabwe is that a mere citizen cannot wield the nation’s flag in an expression of patriotism in the same way the president can. However, as today’s ZANU-PF comes to act like yesterday’s ZANU-PF, perhaps Zimbabweans are also well aware that the true meanings and motivations behind the two similar acts embodied in #ThisFlag and #ThisScarf are very different too.

Correction (03/05/18): The article previously said Mugabe had been pictured wearing the “same” scarf as Mnangagwa’s today. It is actually very similar but not identical. This has been corrected.