It rains, it pours, it floods: Nigeria’s growing seasonal problem

A combination of heavier rains and man-made problems has contributed to devastating floods. Is the government doing enough? 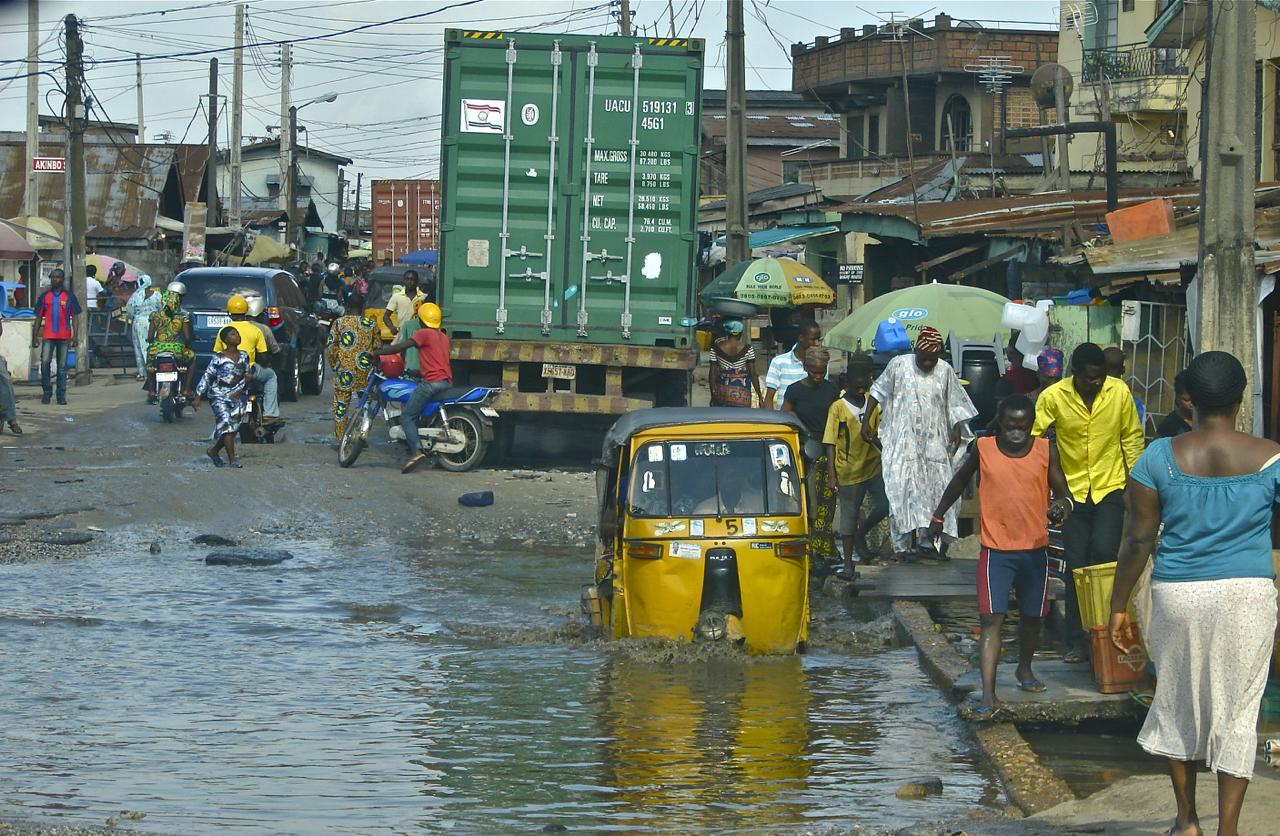 An estimated two hundred people have died and 600,000 have been displaced due to floods in Nigeria this year. Credit: Bart Fouche.

Over the last few years in Nigeria, seasonal flooding has killed hundreds, destroyed hundreds of thousands of homes, and displaced millions of people.

This year, since the rainy season began in June, twelve states have been badly affected. In four of them – Anambra, Delta, Kogi and Niger – the government declared a state of emergency. The National Emergency management agency (NEMA), which coordinate disaster management in Nigeria, estimates that two hundred people have died so far and over 600,000 people have had to flee their homes.

The havoc wrought by heavy rains this year has been devastating. But this level of destruction is not new to Nigeria. In the last few years, hundreds of thousands of people have been displaced and scores have died in floods. In 2012, particularly severe flooding led to two million displacements and 363 deaths.

Nigeria’s flooding problem derives from a combination of factors, natural and man-made alike.

On the one hand, rainfall has become significantly heavier in recent years due to climate change. This year, the Niger River reached 11.06m above sea level and could rise further, approaching the record 12.84m of 2012. Water levels have also risen in upstream Cameroon, Mali and Niger. These countries feed the Niger and Benue rivers, which flow through Nigeria. The towns along these two main rivers are particularly vulnerable.

Man-made issues have also contributed to the problem.

For example, Nigeria has several dams along its rivers, ranging from huge hydroelectric stations to smaller constructions for irrigation and fishing. These structures can, in theory, help manage water levels. But in reality, many have been poorly maintained and run, contributing to the build-up of water levels, endangering nearby towns and villages.

“Dams are not necessary facilitators of flood,” says James Akanmu, a water resource and environmental engineering expert. “But we often mismanage dams and they lead us into problems.”

Another contributing factor is a lack of town planning. As Nigeria rapidly urbanises, towns and cities have sprawled with little regard for environmental concerns. Waterways and canals that are crucial for flows are often filled in as part of building developments, while informal settlements in some areas vulnerable to flooding have doubled in population.

“There is pressure in Nigeria cities. Too many people squeezed into small space and everything overstretched,” adds urban planner, Ugochukwu Donald.

In response to this year’s floods, the government pledged $8.2 million for relief efforts as well as declaring a state of emergency in four states. NEMA set up five emergency operation centres to facilitate search and rescue operations and humanitarian support. These efforts have faced huge practical barriers in reaching flood victims, however, while they have also reportedly been undermined by poor management, bad governance and corruption.

Many also argue that such a reactive approach is insufficient in anything but the short-term. Experts say that Nigeria must proactively predict and prepare if it is to reduce the huge damage caused by floods.

Geography professor Soneye argues that the main problem is not planning but implementation. “Master plans are not Nigeria’s problem,” he says. “We have master plan documents, [but] nobody is acting on it. The disaster continues to grow.”

One area in which Nigeria has attempted to establish forward-thinking is through early warning systems. But this has not been straightforward. Nigerian meteorological agencies make predictions about potential flooding and warnings are meant to be sent to locations at risk, but the system is not always effective.

Furthermore, even when information is passed on, there are challenges associated with getting people to act accordingly. Around half of Nigeria’s population lives below the poverty line and moving households to safe areas can be complex and costly.

“It is not enough to tell people to move that the rains are coming. The early warning system needs to provide that support for such response to take place,” says Peter Nwilo, professor of surveying and geo-informatics at the University of Lagos.

Soneye suggests that many citizens are distrustful of state orders and that warning systems should work through local intelligence and community collaboration to be effective. “The people are not in the mood to believe anything that comes from the government,” he says.

Nwilo concurs. “Our warning system needs to be domesticated and localised before it works,” he says. “People are reluctant to comply with the early warning system until disaster catches up with them. Ignorance is huge and we must improve.”

Indeed, as floods continue to devastate areas of Nigeria year on year, the environmental, economic and – most importantly – the human toll is huge. The necessary actions in many cases are known, but as climate changes leads to more unpredictable and heavy rainfall, Nigeria’s flooding problems will only increase unless there is reliable forward planning, sound management and careful implementation.

“The situation is straight forward,” says urban planner Donald. “Flooding is a natural disaster. We cannot entirely rule it out. But somehow, Nigeria has failed to do the right thing: to make corrections from the past.”