UN peacekeepers stationed at a limited number of polling stations could finally give the people the opportunity to end corrupt militia rule. 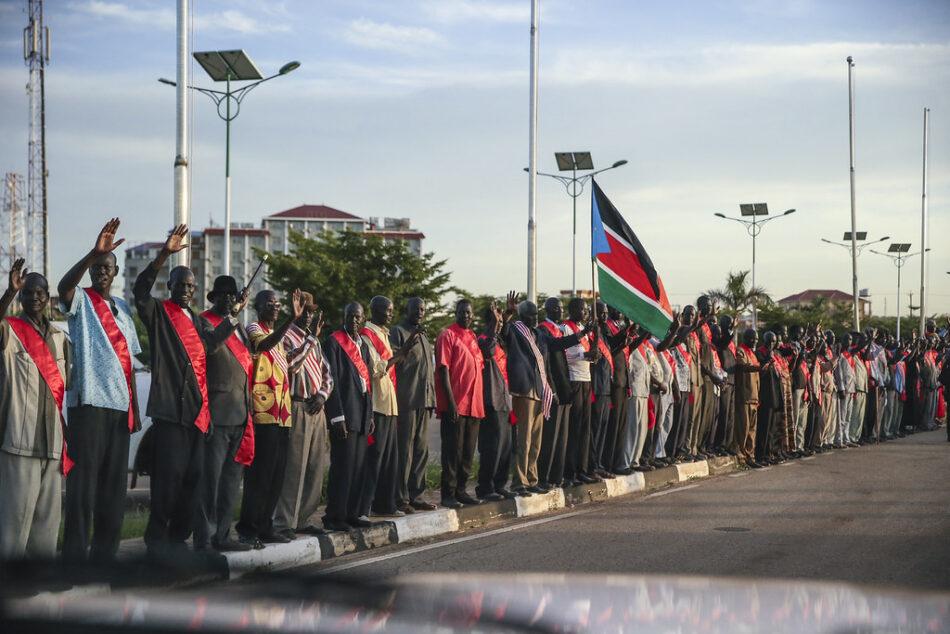 People in Juba, South Sudan, greet the arrival of a delegation from the UN Security Council in September 2016. Credit: UNMISS.

Five years ago, I argued here in African Arguments that elections may be the only way to restore lasting peace to South Sudan. I contended that the 2015 peace deal would not be implemented under President Salva Kiir and Vice President Riek Machar and that the country was likely to see another round of violence between forces loyal to these two men.

Only hours after the article was published, the bodyguards of the two rival leaders engaged in a dogfight at the Presidential Palace in Juba, plunging the fledgling republic back to war for the second time in under three years. Although my warnings proved prescient, they were obvious to an observant eye.

Today, I am repeating the same argument: only the conduct of free, fair, and credible national elections offers a real opportunity for a new beginning. This is not because South Sudan is ready for democracy – far from it – but because elections offer the most credible pathway for retiring Kiir and Machar and for putting an end to the rule of militias. They would also provide the best opportunity for establishing a state upon which the South Sudanese people can eventually build a democratic future.

Just like in the past, there will no doubt be sceptics who – despite being unable to think up plausible alternatives to the rule of militias – will have no trouble coming up with reasons why elections shouldn’t be held. Indeed, the tragedy of South Sudan comes from two sources: the corrupt and violent warlords who perpetuate the rule of militias to feed their insatiable appetite for money and power through endless cycle of un-implementable power-sharing deals; and the so-called international friends who suffer from a lack of imagination and resolve to address fundamental problems and so legitimise quick fixes that make them feel useful.

Take the aforementioned dogfight in July 2016. This incident should have made it obvious that Kiir and Machar needed to be retired. Yet rather than accepting that reality, the Inter-Governmental Authority on Development (IGAD), the regional security organisation that mediated the 2015 peace agreement, along with the Troika of Norway, the UK and US, which provided funding and diplomatic pressure for the deal, ignored it. Instead, they brought the two rival leaders back together in another power-sharing deal signed in September 2018.

Before the ink was dry on that new deal, the stubborn reality was staring everyone in the face again. It was no surprise that for a year and half, the two men could not begin implementing what they had agreed. Moreover, even since establishing a long-delayed unity government for the second time in February 2020, Kiir and Machar have been unable to implement key provisions of the deal.

This includes the unification of rival militias into a national army, which is the heartbeat of the agreement. Without this, it’s difficult to move the country forward. And yet, it has not and probably never will be implemented. This is because Kiir’s regime is deeply unpopular, even among his own Dinka tribesmen of Bhar el Ghazal and Upper Nile regions, and he fears he would lose power without a personalised security state.

After all, Kiir’s record since South Sudan gained independence in 2011 has been a horrifying disaster. In that time, GDP per capita has plummeted from over $1,500 to just $230, while the poverty rate has soared from 50% to 82%. The South Sudanese Pound has lost 99% of its value, going from about SSP3 to $1 to over SSP440 to $1. Over 400,000 people have been killed in the civil war and millions have been displaced. Civil servants and security forces often go for months without salaries. And the country’s membership of IGAD, the East African Community, and the African Union have been suspended due to unpaid membership fees.

Kiir has turned a new nation full of hope into violent kleptocracy that is both a tragedy and a laughingstock. He knows therefore that without ruthless suppression by security forces that are singularly loyal to him, the South Sudanese people will free themselves of his failed leadership. This is why he cannot and will not implement the security arrangements agreed in the peace deal. Giving him more extensions will not change this disturbing reality.

For his part, Machar has lost the faith of his troops and the Nuer civilians who followed him. He seems to have settled for personal enrichment and whatever semblance of power he can exercise at Kiir’s mercy.

The only way out

When a nation finds itself in an equilibrium of a violent and corrupt militia rule such as we have in South Sudan, there are three ways through which it can be escaped.

The first is for another well-organised insurgency to challenge it. This has not happened for various reasons beyond the scope of this article. The second is for a multi-ethnic, grassroots movement to mobilise the population to force change. This has been made difficult by the efforts of Kiir, Machar and other warlords to divide the people as well as by the terror unleashed on political opponents by the notorious National Security Service (NSS) in the form of assassinations, enforced disappearance, torture and arbitrary arrests.

This leaves the third option, which is for the international community to step in and take necessary measures to help citizens regain their agency. If our so-called international friends are genuine about helping South Sudan overcome its corrupt equilibrium, there is perhaps still some hope. This is how it could work.

There are currently over 17,000 UN peacekeepers in South Sudan. Instead of waiting for Kiir and Machar to create a unified national army, which they will not do, the US, the penholder on South Sudanese issues at the UN Security Council, could strengthen the mandate of the UN Mission in South Sudan (UNMISS). Working with like-minded countries, including Kenya which sits on the UN Security Council, the US could make the provision of security for the conduct of free, fair, and credible elections a key priority for UNMISS. Additionally, it could increase the number of forces by an additional 5,000 to 7,000 to be contributed by African countries. The renewal of UNMISS mandate is coming up this March, which provides sufficient time to prepare for general elections in 2023.

These peacekeepers could be deployed across polling stations. The key will be to keep the number of polling stations small – so enough peacekeepers are available at each of them – while providing sufficient time for voters to make their way there. There are 79 counties in South Sudan, including the contested region of Abyei. If each county is allocated five polling stations, this will give a total of 395 sites. And if each polling station is protected by 30 well-equipped, well-trained troops, this means 11,850 peacekeepers would be required in total. Remaining forces could be organised into mobile units that patrol other areas, particularly in highly contested regions.

To accommodate the limited number of polling stations, voting could be allowed to take place over three to five days. Once the voting is complete, the counting could take place within each polling station in the presence of the peacekeepers, journalists, regional and international elections observers, and the representatives of political parties. To minimise fraud, the results could be announced at each polling station, in accordance with the 2012 National Elections Act, and aggregated at county, state, and national levels. That way, maximum confidence in the integrity of the results can be ensured.

Such an election could also ensure the participation of citizens in refugee camps and in the diaspora, who are eligible to vote in the presidential race. The UN Refugee Agency (UNHCR) could facilitate this process in coordination with a new electoral commission to be established.

Giving UNMISS the mandate and capacity to provide security for elections would take away Kiir’s biggest advantage: his ability to manipulate the security forces to extend his corrupt and illegitimate rule through sheer intimidation. If this were to happen, the South Sudanese people would finally be able to put into effect what they unanimously called for during last year’s National Dialogue, which is for Kiir and Machar to exit the political landscape. With the support of our neighbours and friends from around the world, we could finally end the corrupt violent rule of militias in our country.