How fake news spreads, sowing distrust ahead of Nigeria’s elections 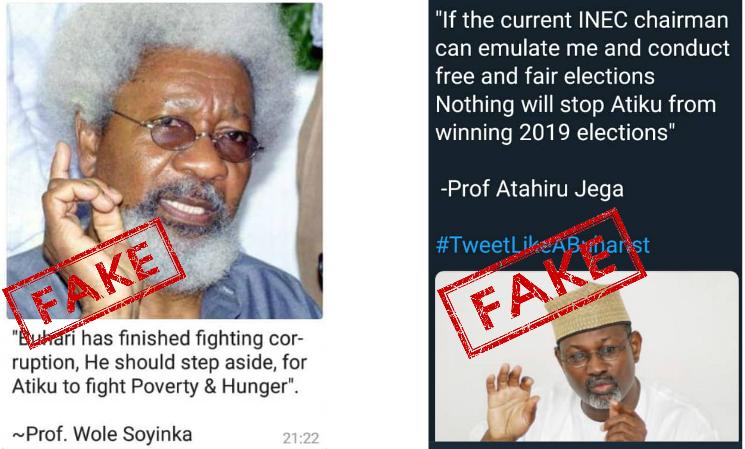 Fake news is not new to Nigeria. In the 2015 elections, for example, a 55-minute documentary full of falsehoods entitled “The Real Buhari” aired on television before doing the rounds on social media. In 2017, Biafra separatists attempting to disrupt the Anambra governorship vote claimed the army was injecting school students with monkey pox to depopulate the South East, leading some schools to close and parents to withdraw their children in panic.

This phenomenon has reached new heights, however, ahead of Nigeria’s 2019 elections. As the campaign has heated up, fake news about both President Muhammadu Buhari and his main opponent former vice-president Atiku Abubakar has swirled on Whatsapp, Facebook and Twitter. It has been shared knowingly by canny campaign officials as well as unwittingly by thousands of unsuspecting voters.

This false information covers many topics and takes different forms. On the subtler end of the scale, there are examples such as Buhari’s aide saying that Atiku only avoided arrest on his US visit because of diplomatic immunity; or the opposition official posting news that “800 companies shut down” even though the story pre-dated Buhari’s term. On the wilder end of the scale, there are the claims that President Buhari has been replaced with a Sudanese clone; or that Kim Jong Un wants to re-colonise Nigeria.

There is also much in between and, together, these stories have spread far and wide. Many have taken on lives of their own. This has created an ever-more uncertain and heightened atmosphere ahead of Nigeria’s high-stakes elections.

How fake news works in Nigeria

False information in Nigeria spreads through various channels, but social media provide the cheapest and quickest ways to access millions. Through Whatsapp and Facebook, people share propaganda videos, made-up quotes, and fabricated articles made to look like they are from the likes of the BBC or Al-Jazeera. Meanwhile on Twitter, bots and trolls working for both Buhari and Atiku’s camps amplify false stories and contribute to the polarisation of the discourse through bullying and intimidation.

Disinformation also operates offline. Mainstream television and radio stations, for example, frequently host “political consultants” – or Sojojin Baci (“soldiers of the mouth”) as they are known in the North – who further spread half-truths and manipulations in favour of their candidates. Often online and offline routes work together. A rumour that begins on social media may be taken up by the Sojojin Baci through more traditional media, who can add nuance to the story in a way that allows it to resonate with a new audience.

More examples of fake news in which stories have been fabricated to look like they are from mainstream news sources.

The effects of disinformation

It is perhaps too early to assess the impact of all this fake information on Nigeria’s 2019 elections. But earlier instances of false stories spreading may be instructive.

During the West African Ebola outbreak in 2014, for example, a story circulated claiming that a local leader in Kogi state had called on all members of the Igala people to bathe in salt water to avoid infection. The false report was first disseminated on Whatsapp and by phone. Then, it was picked up by radio and television stations. Soon, the notion that bathing in salt water protects against Ebola had spread well beyond the Igala people and Kogi state. Hundreds of miles away in Plateau state, for instance, at least two people died and another two were hospitalised after excessively consuming salt and bitter kola believing it would defend them against the Ebola.

At the moment, the single most widely-disseminated piece of fake news is the claim that President Buhari has been replaced with a Sudanese clone named Jubril. The allegation was first presented in a YouTube video made by Nnamdi Kanu, leader of Indigenous People of Biafra (IPOB), in September 2017. The assertion was widely repeated over the following months, though most observers dismissed it as a joke. However, as the election has approached, it has become apparent that several segments of society genuinely believe the false rumour. It has become so serious that President Buhari felt to need to confront it directly in December 2018 both through a press release and by publicly insisting “It’s the real me, I assure you”.

The fact that such an outrageous rumour can reach these levels of dissemination and be believed widely speaks to the potential and dangers of fake news.

The aim of fake news

Disinformation campaigns are run for a variety of purposes. In an election season, they are typically geared towards garnering more votes, dividing the electorate, or suppressing votes for one’s rivals.

[From Boko to Biafra: How insecurity will affect Nigeria’s elections]

An example of this latter strategy may be visible in the emergence of a faceless group calling itself the Fulani Nationalist Movement (FUNAM). It is unclear who is really behind it, but the group is fuelling ethnic and religious tensions through hate messages. It is calling on people to boycott the upcoming elections and to look forward instead to a time when Muslims will rule forever.

Fake news is a huge concern ahead of the Nigerian elections and shows no signs of letting up or being tackled. This is worrying as disinformation is provoking animosity along religious, ethnic and regional divides which are often already tense. It is increasing distrust in both specific candidates and the process as a whole.