The Covid-19 pandemic and other zoonotic outbreaks relating to the eating of wild animals are global challenges with local origins. Without addressing them in a holistic way, the human, social, economic and environmental costs could well become unmanageable.

It is driven by rapid urban population growth, cultural attachment and economic opportunities. This post outlines these drivers and their relationships to diseases transmitted to humans by animals.

Global responses to minimize the impacts of Covid-19 may prove successful from a public health perspective if governments and people cooperate. The causes of diseases transmitted to humans from animals (zoonosis), however, cannot be adequately factored into long-term public health policies without making connections to the over-arching problems of human-induced environmental degradation and cultural factors. This is something the One Health approach promotes.

Bushmeat. The culture and economy of eating wild animals in Central Africa

Seventy-five percent of all emerging infectious diseases are zoonotic.[2] SARS (associated with bats and civet cats, MERS (transmitted to humans from camels in the Middle East), swine flu, bird flu, salmonella, mad cow disease, rabies, Lyme disease and bubonic plague (which resulted in an estimated 50 million deaths in Europe in the 14th century[3]) are just a few examples of zoonotic diseases that have existed for centuries.

Depending on the virus, bacteria or parasite, they can be transmitted through interactions with live or dead animals, animal waste or animal products. The human immunodeficiency virus (HIV) and Ebola are the two big zoonotic viruses in Central Africa. Like Covid-19 – which was first observed at a Chinese fresh meat market selling a wide range of creatures that crawl, slither, burrow and swim – both HIV and the Ebola virus were transmitted to humans from wild animals.

The precise origin of HIV – the virus responsible for acquired immunodeficiency syndrome (AIDS) – is unclear. Butchering bushmeat, however, may have had something to do with it. HIV-1 first appeared in the Democratic Republic of Congo (DRC), and resulted from a cross-species transmission of simian immunodeficiency viruses (SIVs) that naturally occur in African primate species like chimpanzees. SIVs, which are genetically similar to HIV, were somehow transmitted to humans by either chimpanzees or sooty mangabeys (a West African monkey species).

The ‘cut hunter hypothesis’ is the dominant transmission hypothesis.[4] It is believed that a hunter cut himself while butchering a SIV-infected mangabey or chimpanzee and was contaminated by this blood-to-blood interaction. This type of accident with an animal-to-human transmission is quite rare but once the Central African human population became infected, human-to-human transmission thrived. Social dynamics such as rapid urbanization, poor health delivery systems (including widespread use of unsterilized needles) and population mobility for work and trade created ideal conditions for the propagation of sexually transmitted diseases, and consequently facilitated the spread of HIV throughout the world.

First observed in 1976 in the DRC, Ebola is a rare but deadly disease affecting humans and nonhuman primates such as monkeys, gorillas and chimpanzees. Scientists believe that fruit bats are the most likely reservoir for spreading the virus to humans and other animals.

According to the U.S. Centers for Disease Control and Prevention (CDC) ‘viral and epidemiologic data suggest that Ebola virus existed long before these recorded outbreaks occurred. Factors like population growth, encroachment into forested areas, and direct interaction with wildlife (such as bushmeat consumption) may have contributed to the spread of the Ebola virus’.[5]

Despite this scientifically-based hypothesis, bats are sold in many Central African markets for food. Freshly splayed bats continued to be traded at the Kisangani central market despite an ongoing Ebola outbreak. Some people said they knew about the connection and respected public health warnings. Others said they did not know about it. One man said he was informed about the risk but didn’t care: ‘I’ve been eating bats since I was a kid and am not about to stop. I can’t be afraid of a potential disease when real hunger is knocking at my door’.[6]

During another Ebola outbreak, an unexplained influx of abnormally large bats arrived in the Congolese village of Mongbwalu, home to an Ashanti Gold Kilo mining site. The influx was described by one artisanal gold digger as a demonstration of ‘Divine Providence’.[7] The belief that wild animals are a gift of God is widespread. In addition to preparing for the increasing pace of these kinds of outbreaks, public health experts need to take into account such attitudes.

As wildlife levels diminish, the food supply of communities who live in forest areas does too. The development of commercial hunting for urban markets reduces access to meat because hunters increasingly privilege selling meat for money instead of putting it into the household pot. The nutritional consequences of this decline are enormous: one global survey estimated that more than one billion poor people depend on bushmeat for protein, most of the B-vitamin complex and the minerals of iron and zinc.[9] 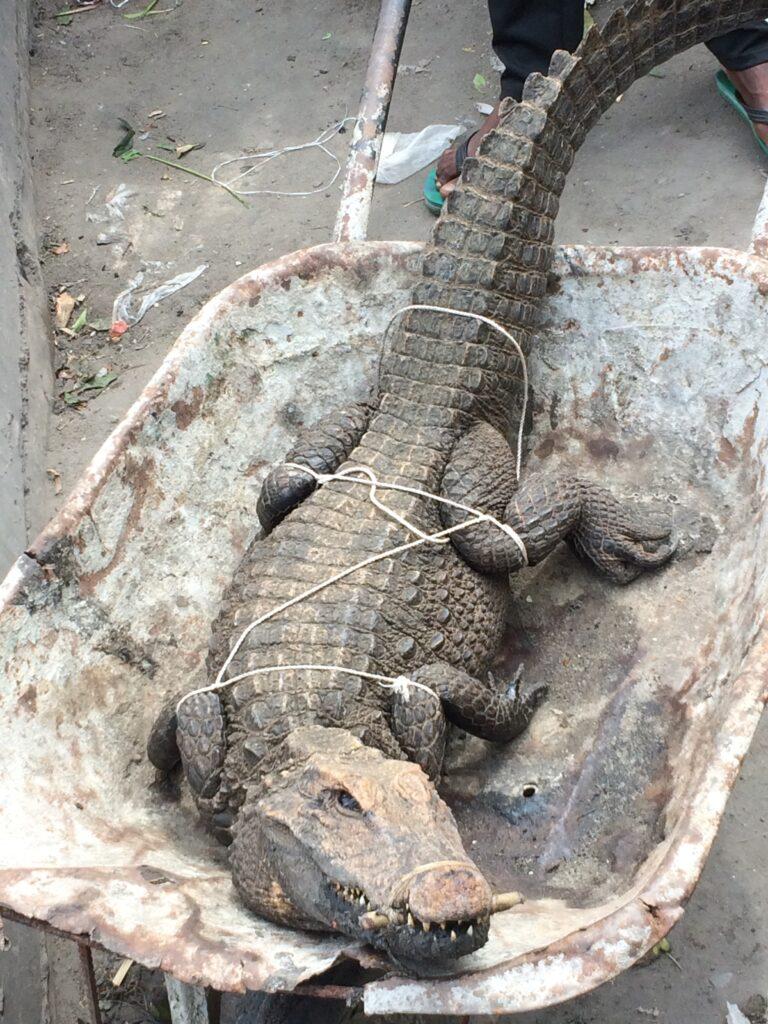 Bushmeat is a ‘total social fact’ in Central Africa à la Marcel Mauss.[10] Motivations to eat and trade bushmeat are clustered around economic, nutritional, social and cultural needs. The thriving bushmeat trade is an economic opportunity for a range of individuals – hunters, transporters, wholesalers, urban market women and street restaurant owners. What may be cultural for one (‘a man needs to eat meat to be strong’), for example, may be subsistence for another (‘how am I going to pay my kids’ school fees if I don’t hunt’). Eating certain species has deep symbolic meaning too: a rich man in Brazzaville who expects his pregnant wife to give birth to a strong boy will provide her with gorilla meat. By ingesting the meat, she appropriates the animal’s symbolic strength. At the social level, bushmeat is a frequent item on the table at weekend gatherings with family and friends. Serving it is good etiquette and ‘associated with a desire to please, reward, honour, show appreciation, or obtain favours’.[11]

Conservationists are struggling to diminish consumption of wild animals through behaviour change campaigns, legislation and law enforcement – especially in African urban settings. But many consumers believe that eating bushmeat is quite simply normal, respectful of tradition, healthy, desirable and commonsensical. This is a well-known challenge to wildlife conservationists but one that is relatively new to public health experts confronted by known and yet-to-come zoonotic diseases. A French version of this article was published in La Libre Afrique and can be viewed here: https://afrique.lalibre.be/48511/afrique-coronavirus-et-viande-de-brousse-une-culture-a-prendre-en-compte/. Congo Masquerade by Theodore Trefon – from the African Arguments series

Theodore Trefon carries out environmental governance and political economy research at the Belgian Royal Museum for Central Africa and at ERAIFT/Kinshasa. His books include Congo’s environmental paradox: Potential and predation in a land of plenty (2016) and Congo masquerade: The political culture of aid inefficiency and reform failure (2011), both published in the African Arguments series. He is working on a forthcoming volume in the same series: Bushmeat: The culture and economy of eating wild animals in Central Africa.