Could the opposition really secure a shock victory in Tanzania’s election?

Having suppressed the usual channels for expressing grievances, would President Magufuli know if he was unpopular before it’s too late? 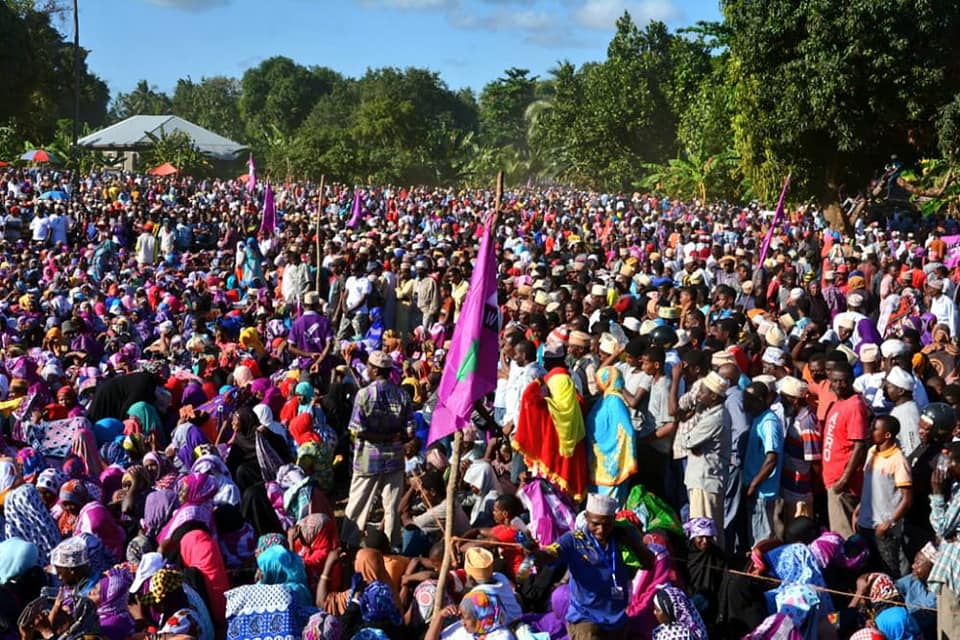 An October election rally held by ACT-Wazalendo, one of Tanzania’s leading opposition parties along with Chadema. Credit: ACT-Wazalendo.

For many political observers, the outcome of Tanzania’s 28 October general election is already known. President John Magufuli will win a second term in office, bolstered by the benefits of incumbency and supported by the country’s best-resourced political party, Chama cha Mapinduzi (CCM).

This confidence derives from the fact that since winning the 2015 election with 58.46%, Magufuli has progressively consolidated his grip on power. His administration has targeted opposition members with intimidation, concocted charges and jail sentences. It has excluded critical voices within the ruling CCM. And, apart from the security forces, it has repressed or co-opted every significant centre of power in the country. As such, the political arena has become so skewed that only one outcome this October seems feasible.

Many of Tanzania’s opposition politicians, however, argue otherwise. They insist that, against all the odds, there is still the possibility of a shock result.

Is this merely part of their election strategy or are there convincing reasons behind their notes of caution?

The case for an upset

The premise for the argument that the opposition could win is that the current regime is deeply unpopular but that it remains oblivious of this fact because it has silenced critical views, devalued advice, and restricted the publication of independent statistics such as opinion polls. This view holds that large swathes of the population are quietly frustrated but that having suppressed the usual channels for expressing grievances, the government will only realise this when it is already too late.

Opposition figures also add that there have been some rifts within the CCM and point out that they have enjoyed high attendance at their own rallies. Tundu Lissu, the leading presidential challenger, has been drawing large crowds on the campaign trail even in the northern Lake Zone from which Magufuli hails.

Among other things, the opposition suggests that voters are dissatisfied with the government over its economic policies. During his time in office, President Magufuli has focused on major infrastructure projects. His administration has invested in a standard gauge railway, a 2,115-megawatt hydropower project, the Ubungo flyover and attempted to revive the national airline Air Tanzania. While these projects may yield long-term benefits, the trade-off is that they divert resources from more immediate priorities in the short-term, as the IMF has repeatedly advised the government.

Some opposition figures are therefore presenting the government’s investment record as an electoral weakness. Zitto Kabwe, for instance, recently explained that the opposition would be “telling the people that they should let bridges, planes, and flyovers vote for [Magufuli]. Citizens should vote for people who will look after their welfare.”

If voters heed this message and take the opportunity of the vote to express their silent discontentment, the argument goes, Tanzania is in for a shock opposition victory.

The case against an upset

While there may be some truth to the opposition’s claims, there are perhaps many more reasons to doubt the possibility they can win.

To begin with, the opposition remains fragmented. Despite months of talks, the two leading parties – Chadema and ACT-Wazalendo – have struggled to agree on the nature and scale of their cooperation. As such, both Chadema’s Tundu Lissu and ACT’s Bernard Membe spent weeks – in September – running separate campaigns. Membe has now gone underground but has not yet endorsed Lissu. Lissu is the most popular and charismatic of the two, but he would need ACT votes, especially in the southern and coastal regions, to strengthen his challenge to  Magufuli.

One reason cooperation has proven difficult is a historic mistrust between the two parties’ leaders. Another is that both parties need votes to qualify for financial support. In Tanzania, political parties that secure at least 5% of parliamentary votes in all constituencies receive a government subsidy. This support is a lifeline for opposition parties. Two years ago, the main opposition Chadema was receiving around $150,000 a month through this measure, which allowed it to maintain a strong grassroots network.

Although the two parties are expected to formally endorse each other’s candidates in the coming weeks, they still face huge obstacles. The National Electoral Commission (NEC) has already disqualified many opposition candidates from running. According to the commission, 160 of parliamentary contestants have now appealed and 66 have had their disqualifications overturned. Nonetheless, this process has skewed the playing field. The ruling CCM did not have any problems registering candidates – including one who was recently convicted of economic crimes. 20 of its nominees will now run unopposed, including Prime Minister Kassim Majaliwa.

The CCM also has the advantage of having total control of local leadership following the 2019 local elections. In that ballot, most opposition candidates were similarly disqualified, prompting the opposition to boycott the vote. The ruling party won with 99.9%.

Finally, President Magufuli has all the advantages of incumbency and of commanding Tanzania’s biggest political party. He has used these resources to involve popular local musicians such as Ali Kiba and Diamond Platnumz in his rallies, helping increase turnout. And he has included a broad range of party mandarins in his campaign, some of whom belong to powerful peripheral factions. While it is true that some CCM figures have felt marginalised under Magufuli, this suggests there have been some efforts towards reconciliation in time for the October vote.

In Tanzania’s 2015 elections, some people predicted that the CCM was set for an unprecedented defeat. That year, four opposition parties had formed a coalition. They had united behind the well-known figure of Edward Lowassa and had access to significant financial resources.

Ahead of the 2020 elections, the opposition looks significantly weaker, the incumbent’s grip on power is tighter, and the freeness and fairness of the poll more threatened. It may be the case that the CCM is less popular than it believes and that the vote will be a surprise to them. But the playing field is so heavily balanced in its favour that the chances of anything but a Magufuli victory are hard to imagine.

Dastan Kweka is a political analyst and development specialist based in Dar es Salaam.