For #EndSARS, Nigerian women drew from a rich history of mobilisation

And their work will not be erased. 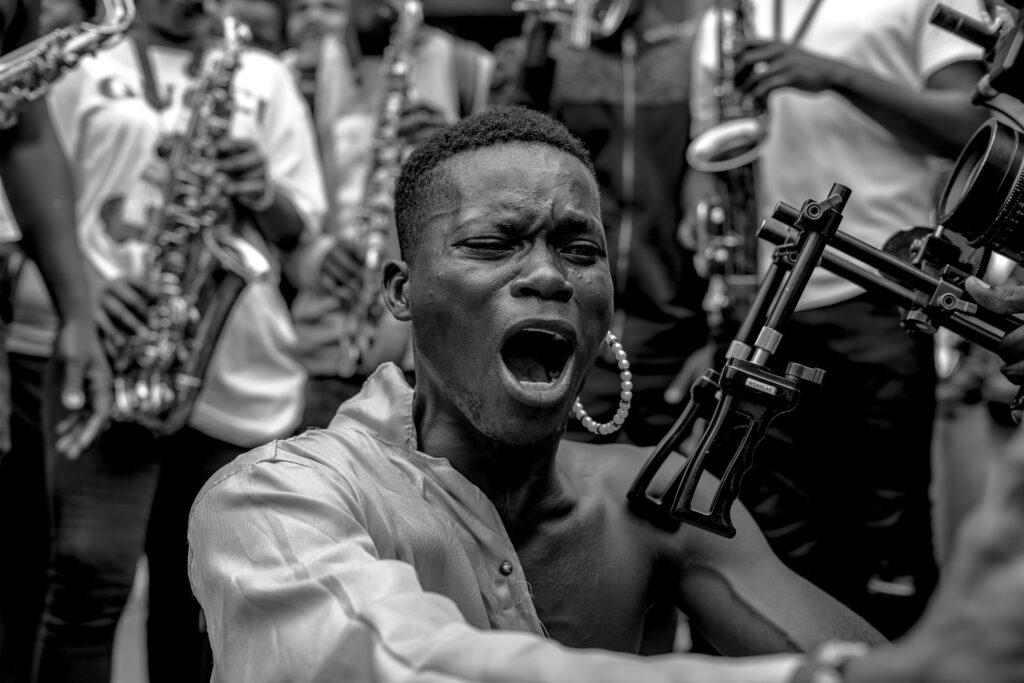 On 4 October, popular online commentator Ozzy Etomi opined on Twitter: “There’ll be some traction to the #endsars movement when women organize around it”. A few days later, her prognosis proved truer than most could have imagined. The #EndSARS movement – calling for an end to police brutality and the abolition of the notorious Special Anti-Robbery Squad (SARS) – reignited in the form of widespread spontaneous protests across Nigeria. There had been similar protests since 2017 but this time, they took on a scale and size that caught most by surprise. Bringing together thousands of Nigerians from across regions, religion, and political beliefs, the leaderless protests quickly grew into the biggest witnessed in Nigeria for years. This may have been due to a range of reasons but one key factor was, as Etomi predicted, that women took on a leading role.

A group called the Feminist Coalition was particularly instrumental.

During three weeks of protests, the organisation raised over N150m ($390,000) in donations. Publishing daily accounts, the group disbursed this money to feed protesters, provide private ambulances, fund a legal team that helped free wrongfully-arrested protesters, set up an emergency call centre, and provide mental health support. The speed and effectiveness with which the Feminist Coalition mobilised was key to sustaining the #EndSARS movement, which eventually extracted several concessions from the government.

These women’s central role surprised many, but it was no fluke. Nigeria has a long history of female involvement in protests. Since well before the Aba Women’s Riots in 1929 and Abeokuta Women’s Union of the 1940s, women have been central to movements for change. More recently, women in Lagos have protested against sexual harassment in markets, leading to changes in attitude. Meanwhile, protests in Abuja pushed the Abuja High Court to declare that sex work is not a crime and encouraged some states to adopt the Violence Against Persons Prohibition (VAPP) Act.

This history fed into the Feminist Coalition’s role in #EndSARS.

Firstly, the past successes set a precedent. Ebele Molua, Project Lead of the Market March, suggests that the small wins from previous protests emboldened women to fight for themselves and others. “I wouldn’t say it laid a direct foundation but it showed the power of movements in general,” she says. “Taking the protests to where the problem is whether it’s the police station or a church kind of set an example for a lot of the protests we are seeing today.”

Secondly, past experience enabled the group to mobilise quickly. Several of its activists were involved in other grassroots movements, such as founding members of the Feminist Coalition, Odun Eweniyi and Damilola Odufuwa, who had previously founded a women’s safe space called Wine and Whine. This enabled them to leverage networks that they had already built over several years and hit the ground running.

Some female protesters also believe women were so effective in #EndSARS because they understood the stakes and could work well collectively. “Young women tend to collaborate and work together on social justice issues,” says Oluwaseun Ayodeji Osowobi, a founding member of the Feminist Coalition and founder of Stand To End Rape. “We are able to identify people with the needed skills within our network and leverage those human resources effectively.”

According to Evelyn Irabor of the Women Against Rape in Nigeria (WARN): “With WARN, everyone’s hand was on deck; from producing logos to donations to organisation. We didn’t even need deadlines. I think women just understand urgency better and the importance of not losing momentum. Our work rate at WARN was extremely remarkable and I believe that is what we are seeing with the Feminist Coalition today.”

While the success of the Feminist Coalition in #EndSARS is not historically unusual, the recognition they received for it has been. This time, the contributions of women have not been downplayed or overlooked.

Molua suggests that this is partly because women today are not shying away from recognition, especially on social media. “We are remembering the names,” she says. “The older generation found a way of erasing the work women did so we are just documenting everything women on the frontline are doing and giving women their accolades now.”

It may also be because broader attitudes are changing. When the government recently set up a panel on youth and sports development without any women on it, for instance, it was criticised across the board.

Many individual protesters also have their own reasons for embracing the Feminist Coalition. Yewande, for example, explained that she does not identify as a feminist but supported the coalition because she has seen what happens when women mobilise. “Women go through a lot and we are constantly fighting someone,” she says. “If it is not rapists, it is something else so I know that women already know how to fight and organise.”

For Peter Ashefu, it was the female activists’ transparency and integrity that won his trust. “I saw it happen with the Busola Dakolo case and when news hit about the women that were raped by the police in Abuja. Women to a large extent are very selfless and you can be sure they will fight this battle even more than we men that are more affected,” he says.

Finally, some like Seyi Oluwabiyi contributed to the Feminist Coalition’s efforts because the need was there and the group was at the forefront of taking action. “I saw a need and stepped up to fill it,” she says. “We all worked in synergy, understanding that if we don’t fight the fight now, we will be affected one way or the other in future.”

This piece is made possible through a generous donation from African Arguments reader Korede Akinsete. She contributed to support a female Nigerian reporter, living in Nigeria, to document the role of feminists during the #EndSARS protests and this critical juncture in Nigeria’s democracy.

Victoria Ikpeme is a writer who is passionate about human interest stories. She’s interested in shaping government policies via storytelling.