‘IDPs’ and the Politics of Labels: Young Migrants in Cameroon’s ‘Anglophone Crisis’ What does it mean to be young in conflict? How does one respond to the dangerous profiling by militant and political groups, and navigate one’s existence on the margins of violence? How do we make sense of fleeing these places and living elsewhere? These experiences are often overshadowed by simplistic, headline-grabbing narratives of loss and tragedy. Being an Anglophone Cameroonian myself, who used to live in the northwest city of Bamenda, I have often been seen as a victim, a person emerging somehow from the desolation left in the wake of the crisis. During some recent research, for instance, I took a taxi to another part of Yaoundé – Cameroon’s capital, where I live – to interview a participant. The taxi driver struck up conversation, yet on realising I was from Bamenda began to understandably but awkwardly sympathise with me because my hometown was at the centre of a conflict known as the ‘Anglophone crisis’. While the loss is undoubtedly part of this conflict, my work shows how young Anglophone people who had migrated to Yaoundé – and were labelled as Internally Displaced People (IDPs) – experienced being on the margins of their own progress in life and how these experiences, in turn challenged (de)politicised narratives of displaced persons.

Ambazonia and the ‘Anglophone crisis’

Since October 2016, Cameroon has witnessed intense clashes between armed separatist groups and military forces in the two English-speaking regions, dubbed in the media as the ‘Anglophone crisis’. The separatists, popularly known as the Ambazonia Defence Forces or ‘Amba Boys’, have been fighting for the formation of a new nation called Ambazonia out of what is currently Northwest and Southwest Cameroon (see below). According to separatists, the English-speaking people have been successively marginalised in Cameroon politics and development which began in 1961 with the country’s post-colonial re-unification. 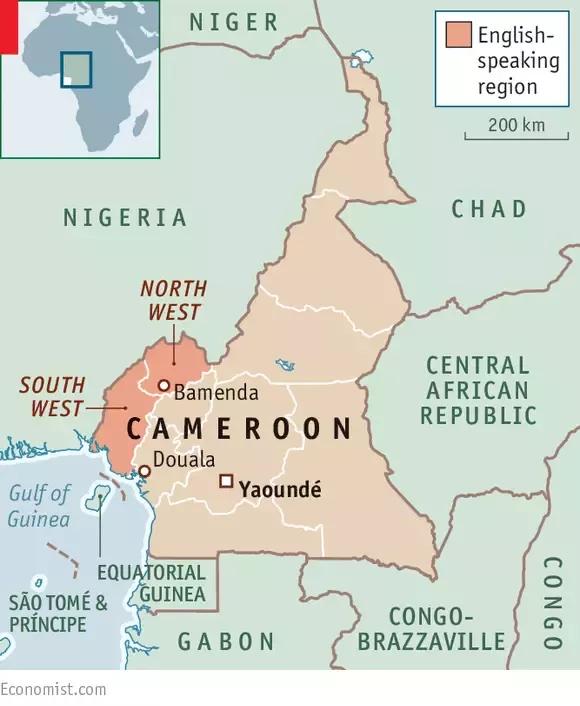 In November 2016, these divisions came to the fore when lawyers and teachers led widespread protests against the use of French civil law codes in English-speaking courts and the appointment of French-speaking teachers to English schools.

By December 2019, the war between the ‘Ambazonia’ Defence Forces and government security forces had displaced over one million people. Fighting has been particularly fierce on both sides, with significant civilian casualties. Eighty percent of this displaced population have found refuge in the forests on the outskirts of main towns and villages but also in large cities in the east, such as Yaoundé and Douala. According to Humanitarian Response, 25 percent of those affected by the conflict are young adults and are most at risk of unemployment, radicalisation and arbitrary arrests particularly for boys over the age of 14. This has left huge number reliant on aid, religious groups, and government.

People classified as Internally Displaced Persons (IDPs) are often viewed in simplistic terms. Many international organisations seeking to address these people’s plight understandably but problematically imagine IDPs simply as powerless victims. In contrast, in the first months of the conflict many Cameroonian politicians viewed Anglophone forced migrants as threats to the community. In August 2018, a government military officer demonstrated this narrative as he walked through an abandoned village in Southwest Cameroon during an interview with France 24 English, where he remarked:

The village is deserted because the inhabitants are accomplices. If they were innocent, they would have given us information about the secessionist fighters and now they are gone. We even want them to come back, but they do not want to.

As the conflict wore on, the government proactively sought to modify this view in response to international criticism and increasingly influential INGOs. The government claimed that IDP figures were exaggerated and began to construct them as the victimized citizens of a criminal cabal – the Amba Boys – and people whom the Cameroonian government was obligated to protect. In an address to IDPs in August 2019, the minister of territorial administration, for instance, made a statement, saying:

Local government started to host welfare and aid ‘give-away’ events, where items such as sanitary products, food and mattresses were distributed. Notably, however, the government did not address the long-term grievances that many Anglophones feel.

These constructions of ‘IDPs’ have had powerful effects. Young people who have fled war to cities like Yaoundé have had to navigate through the politics of IDP labels, using them to find welfare and evading them when they are considered a threat. But what does it mean to one’s hopes and dreams and one’s expectations of the future to go through this experience? These are the challenges that thousands of young people face in Cameroon today, including many of my research participants such as one who I shall call Marcel.

Navigating through: the story of a young IDP

Marcel is young IDP from a village in the southwest region of Cameroon. He lives in Yaoundé with a family of one of his friends from secondary school and works informal, low-income jobs such as moulding blocks at construction sites and cleaning eateries. Marcel begins his story by describing to me how he lost his job back home because of the Amba Boys’ persistent attacks on the company where he worked. Facing this insecurity, Marcel decided to move back to his village and into his mother’s house. Soon, however, the conflict spread. Neighbours and friends began to be killed in the fighting, so he and his family hid in a makeshift shelter beside his parents’ farm.

Such experiences, he said, encouraged many young men try and join the Amba Boys:

I have buried youths of my age, when they are killed all the elders will run away, only the youth like us that are smart and active will take the corpses and bury them. Even two feet we will just dig and bury and while we are burying, we are still afraid that the military will come and start shooting again…. I have once made this prayer, that if one day, my mum, brother or any of my family members was shot by the military, I would join the Amba Fighters. I have once made this statement because they have done it to others. Here I am after having lost my job, imagine the situation when I was very frustrated in the village, the frustration could have forced me to join those boys. The more [the military] go around killing these villagers, they are instead causing more of them to join the terrorist group.

Burying the dead makes you think about life, what it is for, why it is the way it is. Losing a member of your family to a military onslaught is hard to contend with and particularly if you have to dig the earth out of the grave. Marcel believed that losing a member of his family would make him join the Amba boys because others like him have joined the group after similar losses. Along with these common experiences, Marcel describes profiling of young men by the military. He narrates that he had once been asked to remove his clothes in public so the military officers could see that he was not wearing any amulets ‘Amba Boys’ wore to identify and protect themselves. Marcel said that the incident made him feel ashamed and degraded. In reflecting on this past, Marcel does not think like an apolitical victim in desperate need of support, as many international discourses imagine IDPs. He has his own interpretations of the events occurring to and around them.

Our discussion turned to his childhood. Many of those young men who make up the Amba Boys were his childhood and teenage friends. This personal link is important – it gives him a sense of solidarity with them and their cause of independence. The government’s portrayal of these young men as criminals who have caused so much hardship is a message he rejects. Instead, he sees them as fellow young people who are, in a difficult way, fighting for their rights. He explained:

Marcel contends that Amba Boys are only searching for ways to attain economic possibilities in life through independence, which are denied to them as Anglophone in Cameroon.

Despite his support for the cause, Marcel did not join the Amba Boys. His reason seemed to be a belief in modernity that separated out those who are educated from those who are not. Marcel explains that he can do much more with his life than he would if he joined the Amba Boys as he explains:

I for one have been persuaded to join the camp but because of my educational status I can reason better than most of them. It would be wrong for me to join the terrorist so I thought it would be wise of me to come to town to make myself useful so I could help my family in the bushes.

Hence, for Marcel, his life as a young man in Yaoundé was about working for a better future for himself and his family. These actions were not threatening to the Cameroonian state but nor did they mean he had to trade in his political beliefs.

Narratives of IDPs as either threats or victims constrain the realities that young people face in their daily lives in Yaoundé and in making sense of their pasts. Marcel did not think of himself as a mere victim of conflict, but told a story that left space for his long-standing, personal friendships with some Amba Boys and his sympathy for their cause to end marginalisation in Cameroon. This does not mean, however, that he is a political threat to the Cameroonian state. Rather, Marcel holds within himself both a political imagination of a better tomorrow and a personal commitment to work.

France, the Military, and Strongman Politics in ...

Ingrid is a researcher in peace and security with a focus on migration, gender, youth and radicalisation. Ingrid’s current research focuses on the gender constructions and biases within anti-radicalisation campaigns. She also works as a part-time researcher for SCPA DUGA & Co. law firm and as a report writer for Hope for the Needy Association, Cameroon.