Somaliland at 30: Still unrecognised, but alive and well

30 years after declaring independence, Somaliland is still at the margins of the international system despite its considerable successes. 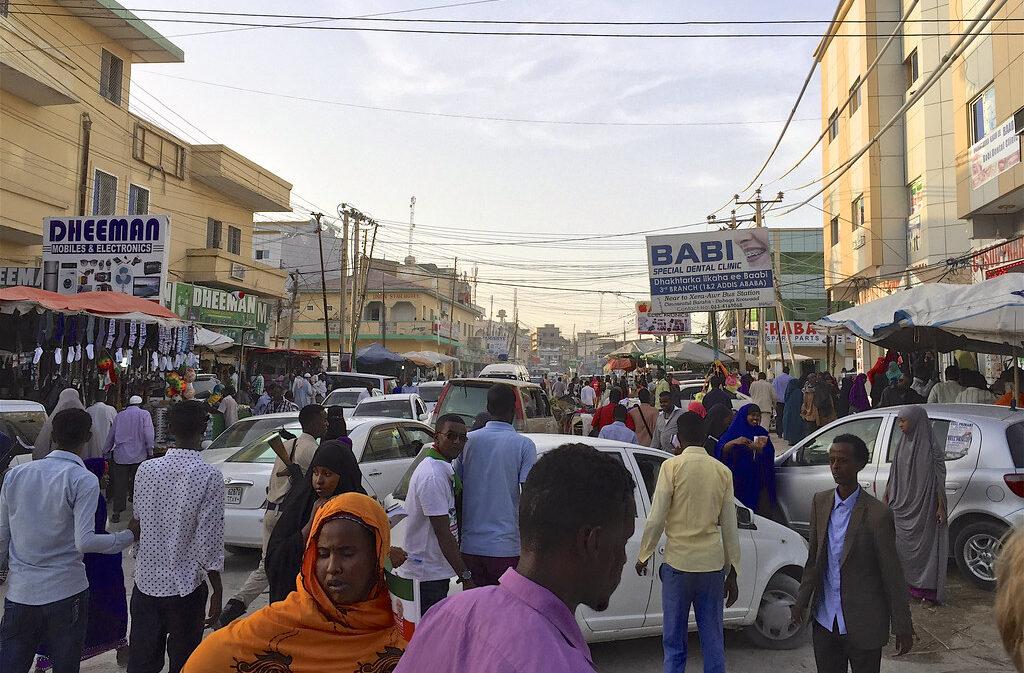 People celebrating Somaliland’s Independence Day on the streets of the capital Hargeysa in 2016. Credit: Clay Gilliland.

30 years ago, on 18 May 1991, the Republic of Somaliland declared independence from Somalia. This bold move lacked preparation and was not supported by any other state. For over a decade, it was unclear where secession would lead. Today, it is clear: Somaliland is a most successful de facto state. It has a clearly demarcated territory (at least on paper), a permanent population, and a legitimate government; but it is still not internationally recognised.

Somaliland’s breakaway from collapsing Somalia in 1991 followed a decade of state repression and civil war in the region. However, the roots of secession go back to colonial times. Between the 1880s and 1960, northwest Somalia was a British protectorate, while the rest of Somalia was controlled by Italy. The British installed indirect rule that incorporated local customary law handled by lineage leaders. The Italians introduced a more direct administration that undermined local traditions and weakened elders.

Somaliland gained independence on 26 June 1960. The rest of Somalia followed on 1 July. The same day, the two territories united to form the Somali Republic. The Somali government faced considerable challenges harmonising different administrative traditions and balancing power between various clans. As early as 1961, military officers in the northwest attempted a coup because they felt disadvantaged. Somalia was also immediately in conflict with Kenya and Ethiopia, where large Somali minorities reside. Mogadishu insisted on uniting all Somali territories in the Horn of Africa under one rule.

In 1969, military and police officers led by General Mohamed Siyad Barre toppled the nepotistic democratic government. The officers allied with Moscow and created a strong security apparatus against internal and external enemies. The dispute with Ethiopia peaked in the Ogadeen War (1978-79). Somalia’s defeat severely weakened Barre’s domestic position. The USSR sided with Ethiopia, but Somalia soon aligned with the US.

Around this time, renegade Somali military officers formed the first clan-based guerrilla groups and set up bases in Ethiopia, protected by Barre’s enemy. The Somali government reacted with punitive measures against civilians in the northeast (now Puntland) and northwest (now Somaliland), who were clan relatives of the rebels. In 1988, the army bombed the north-western towns of Hargeysa and Bur’o after guerrillas had partly occupied them. Thousands of civilians were killed and hundreds of thousands fled to camps in Ethiopia.

With the end of the Cold War, President Barre lost external support. More guerrilla movements were founded. They finally drove the government out of Mogadishu in January 1991. However, Barre’s fall did not end the civil war. Rather, clan militias began to fight among themselves for power. While southern Somalia sank into violence, the people in the north sought to resolve their conflicts. Elders who, thanks to the lighter touch of the British colonial administration, still enjoyed respect among northerners cooperated with militia leaders and local intellectuals. Several smaller peace-agreements led to a major clan conference in Bur’o, where, besides region-wide peace, Somaliland’s independence was declared, claiming the boundaries of the former British protectorate.

The dominant guerrilla group in the area, the Somali National Movement (SNM), supported by members of the Isaaq clan-family, controlled only about 60% of the country. The west and east of Somaliland were held by local militias from different clans. A transitional SNM-government was established in the new capital, Hargeysa. But the massive destruction of infrastructure, lack of resources, and the spread of small arms among the population made effective governance impossible. Additionally, SNM commanders from various Isaaq clans fought over the region’s few valuable resources.

To settle these issues, another clan conference was held in Borama in 1993. After months of negotiations, elders and other clan representatives from the region adopted a peace charter and a national charter. The former dealt with demobilisation, security, and establishing a police force; the latter served as the provisional constitution separating the executive, legislative, and judicial branches and introducing a bicameral parliament consisting of a house of elders (Golaha Guurtida, generally abbreviated as Guurti) and a house of representatives (Golaha Wakiilada). This created the hybrid political order integrating traditional Somali and Western elements of politics, which guaranteed the political stability of Somaliland for years to come.

The conference delegates elected Mohamed Haji Ibrahim Egal as new President. He was an experienced Isaaq-politician but had not supported the guerrillas. His government demobilised the militias and introduced the Somaliland Shilling as the new currency. Reconstruction work began, especially in Hargeysa and Bur’o. Diaspora Somalis invested in shops, hotels, and schools. The first university of the country was established in Borama in 1998. Some international aid organisations reluctantly engaged in the country, but the UN remained focused entirely on the civil war in southern Somalia. In retrospect, this lack of international attention was a blessing in disguise. It allowed the local actors to experiment with peace and state building and to develop a locally working formula of rule.

President Egal’s government held a constitutional referendum in 2001. At the heart of the new constitution were the reaffirmation of independence and the introduction of a multi-party system. A large majority agreed. Democratisation began with the establishment of political parties and the holding of elections in 2002. The unexpected death of Egal that May did not stop the momentum. Since then, several presidential and parliamentary elections have taken place, leading to peaceful transfers of power. The next parliamentary elections are planned for end of May 2021. 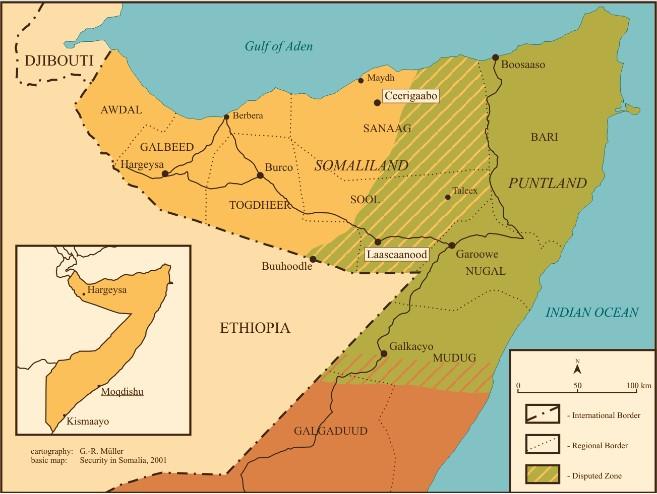 Somaliland’s success story rests heavily on the will of the members of the Isaaq clan-family to secede from Somalia. However, the country is also inhabited by members of other clans with different political orientations. Members of the Darood clan-family in eastern Somaliland stood against secession early on. Most did not participate in the referendum and subsequent elections. As a result, Somaliland has largely become a “mono-clan state” today; Isaaq hold all important offices. The Gadabursi, a clan in the west, participate as well, but they are confined to secondary positions. From the early-2000s onward, armed resistance formed in the east. The more Hargeysa tried to take control of the area, the more bitterly local clan militias fought back. Puntland, an autonomous state in northeast Somalia, supported the anti-secessionists.

Today, the majority of people in central and western Somaliland favour independence. Here, infrastructure, private businesses and the educational sector have developed tremendously over the past 15 years. Nowadays, numerous international NGOs and national development agencies engage in the country. Hargeysa has become a bristling centre, at eye-level with major east African cities.

The eastern parts of the country, however, are not yet at peace. There, Somaliland’s influence is limited and occasionally its army clashes with militias. This is where part of the former colonial border runs. To advance its claim to recognition, it would be important that Hargeysa controls this border. But local militias cooperating with Puntland are preventing this; they desire Somali unity.

Globally, most states are against recognising Somaliland. Italy retains economic interests in southern Somalia, and members of the older Somali elite still have relations to the former colonial power. Egypt supports Somali unity to keep Ethiopia, its rival over the Nile-water, under control. The Arab states prefer a united, strong Somalia in the Horn. The US and most EU countries seek to stabilise Somalia, which wouldn’t be helped by recognising Somaliland. The African Union (AU) meanwhile insists that the continent’s colonial borders should be respected to avoid unpredictable secessionist dynamics. Eritrea and South Sudan are seen as absolute exceptions (Eritrea had the support of the Ethiopian government, and South Sudan had considerable external backing).

The usual position of those taking a benevolent stance towards Somaliland’s independence is that Mogadishu and Hargeysa should negotiate. Some discussions have taken place already, albeit without results. Mogadishu does not want to let Somaliland go, while Hargeysa refuses to return to the status quo ante.

30 years after its declaration of independence, Somaliland is still at the margins of the international system, despite considerable successes regarding peace and state building and massive diaspora investments. Generally, non-recognition in itself is less of a problem; Somaliland shows that political order, democratic process, and a certain degree of development can be achieved without much international assistance. What is worrying is the prospect that a future Somali government could attempt to subdue Somaliland as an unrecognised polity, which could provoke new military conflict.

Markus Virgil Hoehne is a lecturer at the Institute for Social Anthropology at the University of Leipzig. His books include Milk and peace, drought and war: Somali culture, society, and politics (London 2010) and Between Somaliland and Puntland: Marginalization, militarization and conflicting political visions (Nairobi / London 2015).