Chad’s Religious Leaders Remain Mostly Outside the Fray, Unlike Elsewhere in the Sahel Déby meets with the head of the Supreme Council for Islamic Affairs (CSAI). Credit: Tchad.Info

How have Chad’s religious leaders reacted to the dramatic events of April and May? So far, top Muslim and Christian figures have appeared vaguely supportive of the Military Transition Council (CMT) and uneager to rock the boat. In the aftermath of Idriss Déby’s death, religion has not emerged as a major political cleavage, and indeed has not been in the past – although Chadian leaders do appear slightly concerned by a reported uptick in Muslim-Christian tensions over social media.

Religious identities are, at least on the surface, less salient in Chadian politics than they are elsewhere in the Sahel. Chad is not, like Mauritania, an “Islamic Republic.” Indeed, like Burkina Faso, Chad is more religiously mixed than are Muslim-majority Mauritania, Mali, and Niger; Chad is approximately 52% Muslim and 44% Christian. Moreover, as in the other Sahelian countries with the exception of Mauritania, laïcité or French-style secularism is foundational to the Chadian state, mentioned no less than four times in the 2018 constitution. In other Sahelian countries, however, laïcité has not prevented religious actors from playing huge roles in public life. In Mali and Niger, and to a lesser extent in Burkina Faso, the meaning and value of laïcité has been vigorously debated. And one would be hard pressed to find a Chadian religious figure equivalent in activism and outspokenness to Mali’s Mahmoud Dicko, the celebrity imam who was at the forefront of anti-incumbent protests through the summer of 2020.

The most prominent factors and forces in Chadian politics, since independence, have been region, ethnicity, and interpersonal rivalry. Some divisions within Chadian history and politics map loosely onto Muslim and Christian zones, but religion is not the decisive factor in mobilizing political forces. Chad has lacked major oppositional Christian movements, Islamist parties, or much of a homegrown jihadist presence, aside from the relatively small numbers of Chadians who have been drawn to the Nigeria-centric Boko Haram or other regional jihadist actors. Throughout Chadian history, armed rebel groups have often used the language of “liberation” and “change” to justify their rebellions, while opposition parties in the era of multi-partyism have tended to use the language of “democracy” as they sought footholds within Idriss Déby’s authoritarian system. Chadian identity itself remains something of an elusive and moving target. Ironically, Chad’s Islamic identity may be stronger outside the country than inside – for example, just last year former Foreign Affairs Minister Hissein Brahim Taha was elected as the next Secretary-General of the Organization of Islamic Cooperation, and several Chadian institutions have strong ties to the Arab Gulf countries.

Neither the CMT nor the transitional government under civilian Prime Minister Albert Pahimi Padacké include overtly religious actors; the CMT is dominated by military and intelligence personnel who were close to Déby, while the transitional government includes familiar faces from Chadian politics, Déby regime stalwarts and (former) opposition figures willing to lend their stamp of approval to the CMT. The approximately 55 people with the most formal power in Chadian politics right now are all non-clerics. The junta’s most outspoken opposition, meanwhile, in the form of the protest collective Wakit Tama (“the time has come”) and other protesters, appear to draw primarily on more or less secular bases – opposition parties, labour unions, and civil society organizations – rather than on explicitly religious sentiments.

Yet religion matters in Chad. Several of the country’s pre-colonial components were polities defined at least partly in religious terms, such as the Wadai Sultanate in what is now eastern Chad. The country’s first president, François Tombalbaye, initially relied on a heavily Christian support base and in his last years in power he attempted, unsuccessfully, to promote a vision of “Tchatitude” that “embraced ‘African authenticity’ and rejected Christianity and Islam.” Later incarnations of the Chadian state, particularly under Déby, had close relations with organized religious bodies, such as the state-backed High Council for Islamic Affairs (CSAI). Actors in those bodies tended to be political loyalists, such as the CSAI’s longtime president Hissein Abakar, who died in 2018.

It is not surprising then, that as the CMT sought to build its legitimacy, religious actors have figured among its bases of tacit support. Within two days of Déby’s death, his son Mahamat at the head of the CMT met the country’s top religious leaders – the CSAI’s Mamahat Khatir Issa, the Archbishop Edmond Djitangar of the Catholic Church, and Batein Kalingué of the Evangelical community. That meeting took place on the same day (April 21) that the CMT met France’s Ambassador Bertrand Cochéry; the CMT clearly considers religious leaders a key part of the central web of relationships, internal and external, that it is now attempting to manage. Significantly, Padacké also met with religious leaders just days after becoming transitional prime minister.

For their part, Chad’s top religious leaders have mostly made vague statements appealing for dialogue and national unity. For example, the CSAI’s Issa, following the meeting with Padacké, compared the country’s situation to that of a boat that has lost its captain: “So we must join forces so that the boat does not topple over.” Or to take another example, at an April 24 memorial service for Idriss Déby in the eastern Chadian city of Abéché, seat of the Wadai Sultanate, there was a show of unity as the Sultan, CSAI representatives, and members of the security forces all gathered at the regional governor’s residence to pay respects to Déby and pray that “peace and stability may reign in the country.” Such gatherings have both national and local audiences, especially given recurring farmer-herder conflicts in eastern Chad and beyond. Amid the talk of “unity” and “peace,” top religious actors appear to be attempting to stay out of the political fray, as most of the country’s religious leaders have typically done historically. Taking such a stance now, however, amounts to tacitly casting their lot with the CMT and the preservation of Déby’s system under Mahamat, perhaps partly out of fear of what the alternatives to continuity might be.

Other religious currents in the country have also shied away from politicizing Déby’s death. For example, one significant Muslim constituency in Chad beyond the CSAI is the (non-violent) Salafi movement Ansar al-Sunna al-Muhammadiyya (Supporters of Muhammad’s Way). Ansar al-Sunna is something of a rival to the Sufi-dominated CSAI, whose leaders have sometimes been openly hostile to the Salafis. Yet Ansar al-Sunna, too, addressed a warm and fairly formulaic condolence message to Mahamat Déby, referring to him as the president of the country. No major religious current has so far lent its rhetorical or institutional support to the anti-CMT protests.

The CMT has thus benefited from and inherited Déby’s top-down and – at least from the perspective of authoritarianism – relatively successful management of the religious field. Yet there were moments of religious tensions under Déby, as well as longer-term zones of interreligious competition. Such moments include the 1993 national sovereign conference, where among other interventions, the CSAI’s Abakar at least appeared to call for a greater role for shari’a in Chad, prompting a backlash from Christians and others. Other moments of tension came in 2018 as the parliament approved changes to the constitution. In a rare political intervention in April 2018, Catholic bishops criticised the move, saying that changing the constitution without a popular referendum was dangerous. Their intervention elicited a public rebuke from the secretary general of the government. The next month, new constitutional requirements about religious oaths for cabinet ministers triggered a rare moment of open dissent against Déby by a direct subordinate, with one minister-designate refusing to swear on a Bible. More broadly, sectors such as higher education have witnessed ongoing struggles over language, identity, and religion. If the CMT has most religious leaders’ allegiance, that nevertheless does not mean that the junta can expect religion to lie dormant in the new Chad. 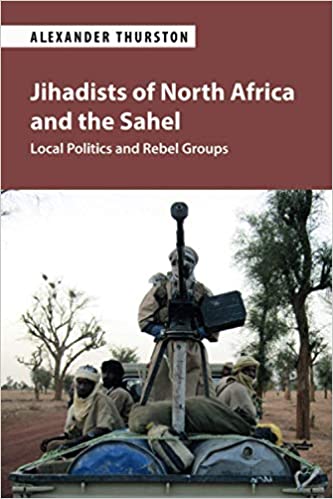 Somaliland at 30: Still unrecognised, but alive ...

Alex Thurston is Assistant Professor of Political Science at the University of Cincinnati. His research focuses on Islam and politics in Africa, particularly in the Sahel and Nigeria. His most recent book is Jihadists of North Africa and the Sahel: Local Politics and Rebel Groups.