Congo-KinshasaEditor's PicksPoliticsRwanda
Home›African Arguments›Country›Central›Congo-Kinshasa›The return of M23: Is there a way out for the DRC?

The return of M23: Is there a way out for the DRC?

Several international forces are deployed in the eastern Congo, where the Rwanda-backed rebel group continues to seize towns and territory. 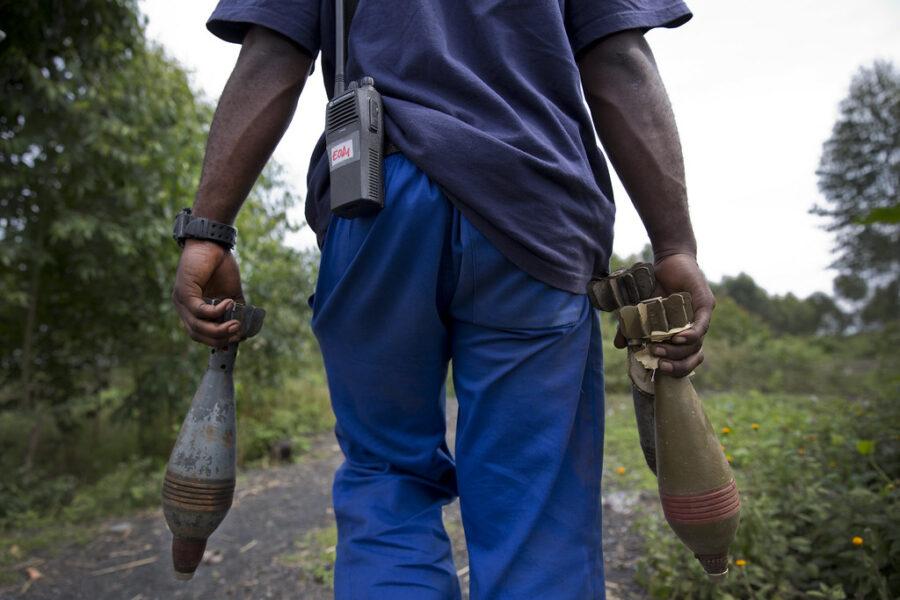 A member of MONUSCO, one of the forces in the eastern DRC where the M23 is operating, clears Unexploded Ordnance (UXO). Credit: UN Photo/Sylvain Liechti.

Last week, Angola’s President João Lourenço confidently stated his belief that his Rwandan and Congolese counterparts are ready to reconcile with one another after a year of strained relations. His announcement came after many months of mediation, yet just days before heavy fighting between the Rwandan-backed M23 rebel group and the Congolese army began once again.

Relations between Rwanda and the Democratic Republic of Congo (DRC) have not always been so difficult. When Felix Tshisekedi become president in January 2019, he invested substantial energy in improving the DRC’s relations with its neighbours. He welcomed Paul Kagame, who became the first Rwandan president to visit the DRC in over 20 years, on numerous occasions. And he allowed Rwanda troops to deploy clandestinely in Congolese territory. In turn, Rwanda deployed a new ambassador to the Kinshasa. Rwanda Air started flying between the Congolese and Rwandan capitals.

Things changed, however, in 2021. By now, some were expressing concerns that Tshisekedi had been naïve in rushing his rapprochement with Kagame. And when the Congolese president turned down Rwanda’s secret request for a larger-scale military deployment in the eastern Congo, the relationship soured. In October 2021, the Rwandan-backed M23 rebel group resurged.

Rwanda was likely further antagonised by the DRC’s improved relations with Uganda, which was invited to deploy troops in the north-eastern DRC in November 2021 as part of joint operations against the rebel Allied Defence Forces (ADF).

Despite solid evidence presented by a UN Panel of Experts that Rwanda is providing logistical support to the M23 and reinforcing its ranks with Rwandan Defence Force (RDF) soldiers, Kigali denies backing the rebel group. At the same time, however, it has said any military involvement it does have in the eastern Congo would be justified because the DRC is working with the FDLR, a Rwandan Hutu militia whose leaders were involved in the 1994 genocide.

In fact, despite its official denials, Rwanda is participating in internationally supported mediation efforts with the DRC, which suggests it recognises there is something to be reconciled. And on 24 October, it accused the Congolese government of abandoning a negotiated solution with the M23. The DRC responded by saying the statement was tantamount to “a clear and irrefutable admission that it is Rwanda that operates behind the M23” and accused it of defending “an armed group, a terrorist one at that, in another state”.

Deployments to the eastern DRC

The M23’s resurgence has prompted several bilateral and multilateral efforts. Already on the ground are the UN mission MONUSCO, which has been present since 2001. And the Force Intervention Brigade (FIB) arrived in 2013 after the M23 captured key towns in eastern DRC. Composed of troops from South Africa, Tanzania, and Malawi, the FIB’s deployment coincided with a rare moment of international consensus that Rwanda must end its support of the M23 and stop destabilising the region.

Since the M23 reconstituted itself in 2021-2022, a new regional bloc has entered the fray. The East African Community (EAC), of which the DRC became a member in March 2022, has initiated a two-track process aimed at ending instability in eastern Congo: political talks with rebel groups that have expressed a willingness to surrender, coupled with the deployment of an East African Force. So far, Uganda, Burundi, Kenya, and South Sudan have contributed to this new unit. The DRC has welcomed the force but stated that it would not accept Rwanda’s participation in it.

The neutrality of the EAC’s intervention, which will be commanded by Kenya, is questionable. Over the last three decades, Uganda has intervened unliterally in the DRC countless times, pursuing its own political and economic interests. Meanwhile, the Burundian army has also been secretly active in the eastern Congo for some time, pursuing anti-government rebels. Both the Ugandan and Burundian contingents will remain where they were before the EAC rebranded their military engagements as a regional stabilising force.

The East African unit’s official mandate is to go after rebel groups – domestic and foreign – that refuse to surrender. Former president Uhuru Kenyatta is mediating talks in Nairobi with those that have. But as the M23 captures more terrain, it likely that some of those armed groups may resume fighting.

For the M23’s part, its military strength is apparently greater than ever. UN Secretary General Antonio Guterres has warned that MONUSCO cannot contend with a M23 that has the fighting power of a conventional army. The question also remains of whether Kenyan and South Sudanese troops will be able and willing to get involved in what is now a hot war.

Constrained in the Congo

In moving forwards, President Tshisekedi is constrained by a number of factors.

To begin with, the M23’s resurgence has stoked ethnic hatred and anti-Rwandan sentiment in the DRC. There is a little popular appetite for talks with the rebels or for attempts to de-escalate tensions with Rwanda. Tshisekedi has raised expectations that only a military defeat of the M23 or a Rwandan admission of guilt will bring an end to the violence.

However, this has backed the Congolese government into a corner. The DRC’s attempts to garner international condemnation of Rwanda’s actions have been largely unsuccessful. Despite the UN Panel of Experts report, the historic reluctance among many governments to criticise Kagame remains a key obstacle.

It may be significant that Tshisekedi and his team are relative newcomers to the regional game. Unlike former president Joseph Kabila, who had intimate knowledge of the key military and civilian leaders in the Great Lakes, and who spent over 20 years interacting with his Ugandan and Rwandan counterparts, Tshisekedi’s inner circle is composed of civilians, most of whom are relatively unfamiliar with the byzantine inner workings of the insecurity dynamics in eastern DRC and wider region. This complicates the possibility of a behind-the-scenes rapprochement.

Lourenco’s comments last week may have been premature, but his job as mediator is vital. He must keep the two presidents talking with the aim of diffusing the crisis, halting the violence, and keeping the DRC and Rwanda from full-scale war.

Mediated talks between the Congo, Rwanda and the M23 may also be a useful approach. Although talks with the rebels will be politically costly for Tshisekedi, the armed group’s ongoing military successes are already making his government look weak. But in order for Tshisekedi to accept such talks, there must be a quid pro quo from Rwanda in the form of some admission of its role in supporting the M23.

This could lead to improvements in the short-term. In the long run, however, mediation efforts – supported by the Africa Union, EAC, southern Africa’s SADC, UN, and special envoys from key countries – must address the entrenched drivers of violence in the Great Lakes. It is not enough just to reconcile Kagame and Tshisekedi or militarily defeat the M23. After three decades of conflict and meddling in the eastern DRC, relationships in the region are characterised by distrust and disrespect. This will not change until the cost of the status quo becomes unbearable not just to the DRC but also to Rwanda and Uganda.

Feminizing the State Apparatus: A Mirage for ...