EconomySomalilandTop story
Home›African Arguments›Economy›The making of a global port, and the unmaking of a people

Having survived centuries of successive governments, colonialism and war, have Berbera’s dockworkers finally met their match? 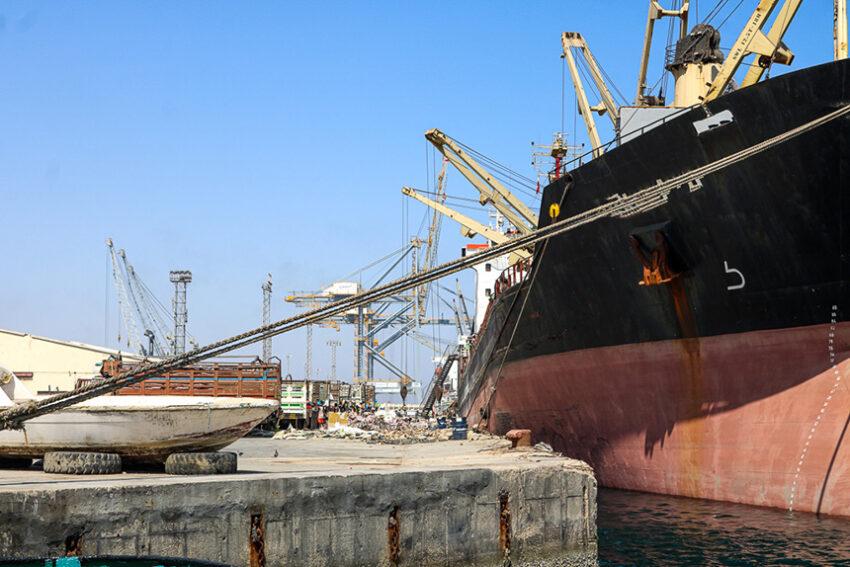 The Geelle work at the port in Berbera, Somaliland. Credit: May Darwich.

Somaliland’s dockworkers have been part of the unique fabric of the breakaway republic – and the broader Horn of Africa region – for centuries. Known locally as Geelle or Geelaha Dekeda – Somali for “camel” or “camels of the port” respectively – this association of men have carried heavy goods on their backs, moving like a caravan from docks to warehouses under high temperatures and humid conditions, since at least the 19th century.

Since then, the Geelle have been an integral part of Somaliland’s infrastructure and history. Today, the dockworkers’ professional association, in which membership is inherited through kinship, is well known in the de facto sovereign state. Many of the group’s hees hawleed (“work songs”) – spontaneously composed while loading and unloading ships – have become famous across Somali-speaking regions of the Horn. During the Ethio-Somali war in 1977-78, one such song became notorious for revealing to the people how military officers had secretly ordered the dockworkers to divert sugar to the army. “You are wondering and waiting for a sack of sugar which travelled to Godey [a city in Ethiopia] at midnight wearing a military uniform,” it went. More recently, Geelle work songs describing everyday activities and perceived injustices have spread online through platforms like YouTube and TikTok.

For hundreds of years then, the Geelle have persisted through successive democratic and military governments, colonial rule, and the Somali civil war. However, their toughest challenge may be unfolding today. In 2017, the UAE-based DP World, a leading global port operator and logistics giant, signed an agreement with the Somaliland government to modernise Berbera, the region’s main port. This may change everything for the Geelle.

As one dockworker told us in May 2022: “We have been doing the work manually, and there is no reason to purge us from the port, but the modernisation of the port puts a great risk to our future.”

The modernisation of Berbera

Since taking over Berbera, DP World has expanded the quay by 400m, established a new container terminal, and recently launched ‘Berbera Economic Zone’, a free zone that exempts traders and business partners from taxation for re-exports and allows them to employ foreign labour.

In 2021, the multinational also started managing the port’s operations, with the latest in crane models becoming operational that June. Since that shift, just 30% of goods arriving to the port have been unloaded and reloaded by the Gelle.

In Somaliland, as elsewhere, containerisation – which allows goods to be transferred across various modes of transport without unpacking – has made much traditional dock work redundant. The majority of manual labour has been replaced by computerised work in cranes and offices. This has increased the turn-around speed of goods and profoundly changed the kind of port work required. Despite the dockworkers’ efforts, DP World has declined to hire them, though the company has recruited 500 Salavtore, labourers who arrange goods inside ships before the crane lifts them up. Most of them worked in the port before DP World and now receive regular income and, so far uniquely in Berbera, medical insurance.

Nonetheless, these overall shifts have integrated Berbera into what anthropologist Anna Tsing describes as “supply chain capitalism” – new and innovative ways of linking labour, capital, and nature into a global network of containerised commodity production and distribution. They are also an illustration of how the “just-in-time” containerised global trade has placed dockworkers in complex technological chains of maritime logistics in which working conditions and power structures have altered.

Between aspiration and despair

While the dockworkers have been allowed to continue working at Berbera, their status and future remain uncertain. As has happened in other port cities around the world, the Geelle and their families may have to migrate to find work elsewhere before long. This would not only end centuries of history and change the port’s job markets, but it could transform the whole urban outlook of Berbera.

However, the Geelle are not ready to simply disappear just yet. Their labour union has more than 1,000 members and continues to negotiate with the Somaliland Port Authority. In the last few years, dockworkers have organised several protests, claiming that they are losing their jobs and rights, and demanding regular employment in the port. During these protests, the association itself has faced conflicts, as many members feel the organisation has stopped representing their interests. These splits are hampering the Geelle’s negotiation power vis-a-vis both Somaliland Ports Authority and DP World.

It should also be noted that not all Geelle are against the port’s modernisation. Some believe the new infrastructure will lead to more wealth and comfort. These individuals are resigned to seeing an end to the physically demanding labour of loading and unloading ships manually in extreme weather and imagine a future in which their children operate computers in the air-conditioned offices at the port.

While many Geelle despair at the manner and effects of the developments at Berbera, one told us: “Things are now changing; there are cranes loading and unloading ships. We are sticking around now to raise our children to go to school and get better jobs. We don’t want our children to replace us”.

Research in this piece was made possible by a grant from Carnegie Corporation of New York. The statements made and views expressed are solely the responsibility of the authors. The research is part of the project: Port Infrastructure, International Politics, and Everyday Life in the Horn of Africa.