Al-Shabaab has changed its tactics. AMISOM must do so too 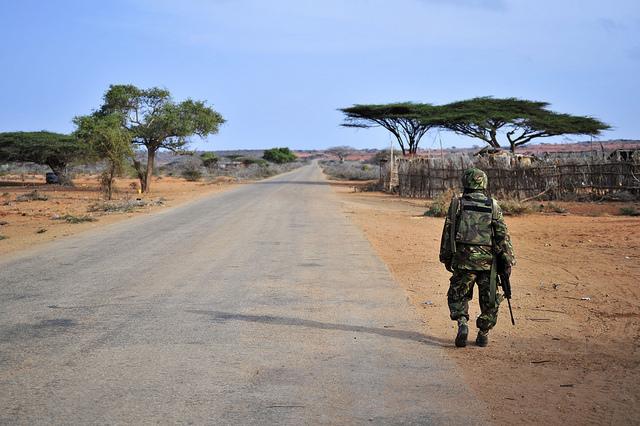 When al-Shabaab’s elusive leader Ahmed Abdi Godane was killed in a US air strike in Sablale on 1 September 2014, there was a widespread belief that the Islamist group’s operational capabilities might dwindle. But one year later, this has not proved to be the case. Rather, it seems the militants have lost little of their ability and remain an unyielding force determined to destabilise Somalia and the region.

In the early morning of 1 September 2015, on the first anniversary of Godane’s death, al-Shabaab fighters rammed a car full of explosives against an African Union Mission in Somalia (AMISOM) military base in  Janale, 90km  southeast of Mogadishu. A large number of fighters, close to 200, then stormed the base. The Ugandan AMISOM soldiers manning the base were overpowered and there were multiple casualties, though there is confusion over the exact numbers – al-Shabaab claimed it killed 70 peacekeepers, while the Ugandans put the number at just 12.

The terror attack was one of the worst attacks against AMISOM since it began operations eight years ago, though it was not unusual in the force’s recent history. A similarly devastating assault occurred just a few months ago in June, when al-Shabaab killed over 50 Burundian troops in an attack in the same region. AMISOM responded by hastily withdrawing soldiers from 10 towns in the area, ceding them to al-Shabaab control. AMISOM justified the move, referring to it as “re-adjusting and re-organising”.

These events suggest that there remains a difficult task ahead for the African Union forces, even after Kenyan and Ethiopian troops were integrated into the multinational force – joining Ugandan, Burundian and Djiboutian counterparts –  in 2012 and 2014 respectively, raising the number to over 22,000.

The truth, as of now, is that AMISOM and Somali soldiers are far from defeating al-Shabaab, and concerns have been raised around their operational capabilities. There are suggestions the forces have insufficient intel-gathering abilities, are disorganised, and suffer from a disconnected command.

Since 2010, AMISOM has conducted three major joint offensives with a mix of Somali forces against al-Shabaab. The latest, dubbed Operation Jubba Corridor, began in July and involves Ethiopian and Kenyan troops targeting the three regions (Bay, Bakool, and Gedo) that have borders with their two countries.

The operation has so far succeeded in dislodging al-Shabaab from two of their major stronghold towns – Bardere in Gedo and Dinsoor in Bay. The militants had controlled these towns for the previous eight years.

Bardere, al-Shabaab’s last major foothold in Gedo, was a strategic crossing point for the militants. From here, they could launch and plan attacks in the likes of Kismayo, Baidoa, Barawe, as well as in Kenyan border towns of Elwak and Mandera, where al-Shabaab carried out two major attacks against civilians in November and December 2014 killing 28 and 36 respectively. Dinsoor meanwhile had served as a sanctuary for al-Shabaab’s top leadership cadre since the fall of Barawe in October 2014.

However, while these offensives managed to deprive al-Shabaab of territory, they did not succeed in depriving it of its assets such as fighters and weapons or weaken its military command.

In fact, what al-Shabaab has done during these various AMISOM offensives is retreat, without putting up much of a fight, into remote areas and towns still under its control. The group has typically saved its energy for later asymmetrical actions.

Many have tended to see al-Shabaab’s withdrawals as signs of weakness and defeat. But the reality is that the takeover of towns by AMISOM and Somali forces has often overstretched the peacekeepers, whilst freeing militants from their previous administrative responsibilities. This has allowed the group to concentrate on destabilising the captured towns.

The key to the country

In addition to overstretched numbers, AMISOM also faces myriad other challenges, including a lack of resources such as air power. A military aviation unit could provide cover for forces and also destroy al-Shabaab bases, which are often in rural areas.

Better air power could also be crucial in defending and responding to attacks. For example, despite Ugandan and Ethiopian contingents being based just 30km and 70km away from the Leego, it took them more 48 hours to reach the scene when the Burundian base in the town was attacked by al-Shabaab in June. This delay was reportedly due to a fear that al-Shabaab fighters were on the roads waiting to ambush reinforcements. By the time other AMISOM contingents arrived, al-Shabaab had left the scene. However, if air power was available, the situation in the last two major attacks, in Leego and Janaale, could have been very different. Al-Shabaab may not have succeeded in killing such a large number of peacekeepers, and its escape may have been prevented.

AMISOM is also weakened by the lack of effective coordination and shared command. Each national contingent has its own commander, who in theory reports to AMISOM’s military chief. However, that has not been the case in practice. For instance, on 16 August, Ethiopian troops took a unilateral decision to withdraw from several towns and villages in the Hiran region without the consent of the Djiboutian contingent which operates in the area. This led the commander of Djibouti’s AMISOM contingent to accuse Ethiopian troops of taking orders from Addis Ababa rather than the AU high command itself.

With Operation Jubba Corridor expected to continue until early next year, AMISOM will continue to be stretched across a vast swath of territory. This will tie up African and Somali forces as they protect urban areas from militants who have now adopted asymmetric warfare. These strategies include ambushing convoys and blocking main supply routes to towns. For instance, in the year or so since AMISOM retook Bulo-barde, Hudur and Wajid, these towns have been under al-Shabaab blockage. AMISOM have to airlift food and military hardware to its soldiers in these areas as all the roads are controlled by the militants.

In fact, al-Shabaab militants often regroup in rural areas in between AMISOM offensives and are effective in fighting back by advancing in broad lines, lengthening the battlefield. This enables the fighters to find weaknesses in its AMISOM defences, concentrate its forces at that more fragile point, and use its mobility to conduct surprise attacks.

The need for revaluation

If Somalia is to defeat al-Shabaab, there is a serious need for more forces on the ground – enough to take territory and control it. AMISOM forces also need more support in the form of resources and equipment – most urgently a military aviation unit. It is also crucial that the capacity of Somali forces is raised. The under-trained, under-equipped and poorly paid Somali soldiers are depleted by years of corruption, absenteeism and decay. But without them being trained, organised, and equipped to take care of things on their own in the long-term, AMISOM achievements cannot be sustained.

However, a deeper interrogation of the African and Somali forces’ tactics is also desperately required. By abandoning its conventional military strategy aimed at holding onto territory or reclaiming ground, al-Shabaab has managed to intensify its mass raids and attacks on AMISOM. In the past five weeks, it has carried out three attacks against the African peacekeepers and killed scores of troops. The Islamist fighters have forced AMISOM and Somali soldiers to withdraw from towns and villages in Lower Shabelle and Hiran regions due to fear of attack.

With these tactics, al-Shabaab is arguably gaining the upper hand, and AMISOM’s ineffective coordination and conventional approach is not helping. If the current trend of insurgent attacks continues, the AU peacekeepers will experience increasing attrition through casualties and desertion, hampering its ability to secure Somalia. In light of these concerns, the re-evaluation of AMISOM strategy is a necessity. Al-Shabaab has shifted its tactics since 2011, but AMISOM is yet to respond and adopt tactics appropriate to the group’s guerrilla-style warfare.

Muhyadin Ahmed Roble is Senior Editor at the Radio Ergo and analyst of African Affairs for The Jamestown Foundation specialising in conflict, security and counter-terrorism. He can be reached at muhudin01@gmail.com.