The most positive thing that can come out of the horrendous incident is for Somalia’s leadership to galvanise the people towards a common goal. 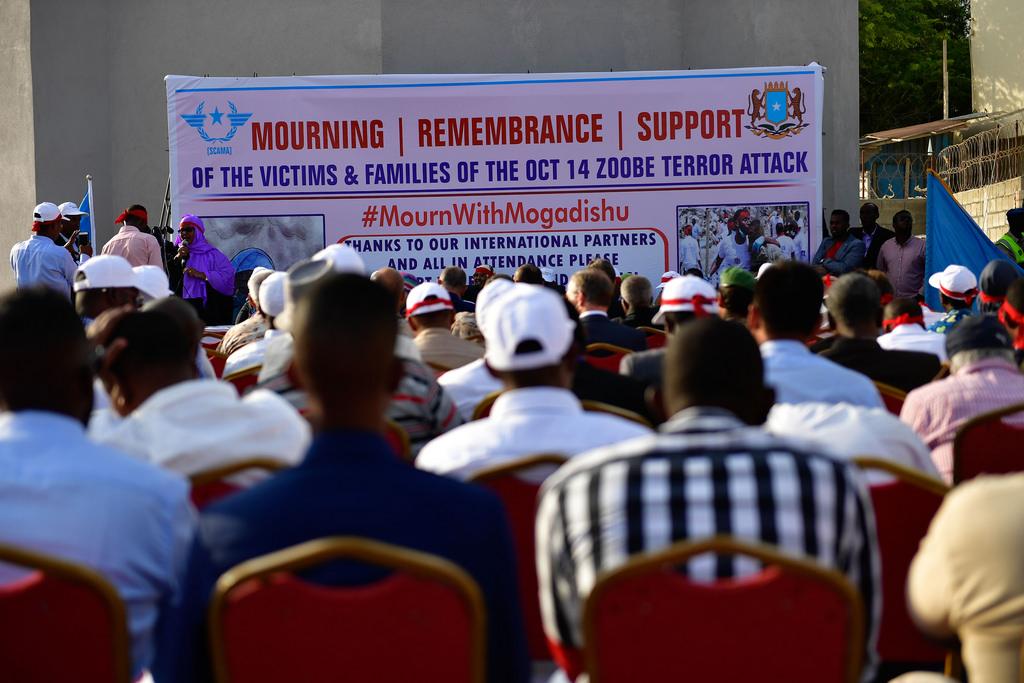 Guests attend a ceremony to remember the victims and families of the October 14 attack in Mogadishu. Credit: AMISOM/Ilyas Ahmed

On Saturday 14 October, a truck laden with explosives was detonated at Kilometre Five, also known as Soobe, a busy intersection in Mogadishu. It killed 358 people and injured over 400, burning some beyond recognition. The death toll is expected to rise even further as some 58 people are still missing.

The attack was the single deadliest in Somalia’s history. It eclipsed anything seen before and saw buildings collapse, cars and buses burnt (including a one full of school children), dead bodies incinerated, and body parts strewn across the apocalyptic, approximately 500-metre site.

In the aftermath of this devastating attack, Somalia is mourning but also demanding the answer to many questions.

The first is why no one has claimed responsibility. Part of the answer is that, as some researchers have pointed out, anonymous attacks are “actually the norm, as only about one in seven terrorist incidents are claimed”.

Given the fact that the Mogadishu bombing seemingly missed its target, led to the widespread civilian casualties and has ignited intense public outrage, it perhaps makes sense that no organisation wants to claim responsibility.

That does not mean there is ambiguity over the identity of the perpetrators however. The government immediately pointed the finger at al-Shabaab, the Islamist insurgency group waging a guerrilla war against the Federal Government.

How could this happen?

The question of responsibility may be the first question, but it is far from the only one. There are countless questions over how this attack could be allowed to happen in the first place.

For instance, with Mogadishu’s roads littered with security checkpoints manned by members of the Somali National Army, how was it possible that a truck the size of two double-decker buses could manoeuvre through the city laden with such heavy explosives undetected? Why aren’t there sniffer dogs and adequately trained bomb disposal units that can deal with suspected vehicles?

Could the internal squabbling of Somalia’s security elite and subsequent resignations of the Defence Minister and Army Chief just days before the blast have contributed to this glaring security lapse?

How can an attack of this magnitude be planned and orchestrated in the country hosting 22,000 African Union troops? With all the international support and billions of dollars spent in Somalia, why is there only one ambulance service?

With all its destruction and loss of life, why is it that no one has taken responsibility for this security failure and resigned?

The government must also address underlying weaknesses that may have allowed such an attack to take place.

For example, Somali Troops had recently withdrawn from several towns including Bariire, a mere 45km away from Mogadishu, and a major route to the capital. The withdrawals allowed al-Shabaab to capture these areas and are believed to have resulted from a rift between the Federal Government and the leaders of the Federal Member States.

President Farmaajo’s call for a national unity meeting in Mogadishu on 28 October is a positive step in trying to re-establish a united front, which will be essential to defeat militancy.

Although impossible to prove, it is also commonly believed that some institutions and organs of the federal government have been infiltrated by al-Shabaab. Fundamental reform of Somalia’s security agencies is therefore imperative. The Somali National Army (SNA), National Intelligence and Security Agency (NISA) and Somali Police Force (SPF) must be overhauled.

Robustly addressing these issues will be encouraging. It will signal to the Somali people, whose attitudes towards al-Shabaab are already changing, that their government means business and that change is possible.

A shift in attitudes

In America, the attack on September 11th 2001 had a dramatic effect on the public’s attitude towards its government. The American people were more willing to trust it in deciding the best response towards the perpetrators. Meanwhile, studies conducted after the incidents showed that attitudes towards the use of violence and war became more positive.

These shifts helped President George W Bush sell war to Congress without much opposition. Americans believed that the 9/11 attack was targeting their way of life and values, and overwhelmingly supported their government in response.

The Soobe incident was Somalia’s 9/11. There has been a similar shift in attitude. Mogadishans overcame their fear of al-Shabaab and protested against the group for the first time. Thousands of protesters came out on 18 October shouting “down al-Shabaab” and donning red bandanas, marking a truly watershed moment. It suggested that the long silence towards al-Shabaab’s actions and complicity of some residents might be over.

Like Americans after 9/11, Somalia’s protesters, whose anger was palpable, saw the recent attack as an existential assault on the Somali people.

The most positive thing that can come out of this horrendous incident is for Somalia’s leadership to seize the moment in galvanising the Somali people towards a common goal.

The government has plenty of questions to answer still and actions to carry out to prevent further attacks, but to maintain the current public awakening, it must ensure the victims and the incident will never be forgotten.

Mayor of Mogadishu, Thabit Abdi Mohammed, has already proposed naming the site of the blast ‘the 14th October Junction’. A memorial site displaying the names of the departed should also be built, while an annual service should be held every 14 October in which the names of all who perished are read aloud.

Taking tangible steps to re-examine the security sector, and providing answers to the aforementioned questions will not only restore the public’s confidence in their government that such attack will never happen again, but will also keep the crucial new found public engagement in denouncing al-Shabaab alive. This is something the government should do its best to maintain and never lose the sight of.

The world has put its faith in ...