The ruling APC is resilient, but the main opposition SLPP and newly-minted NGC are launching strong challenges to change Sierra Leone’s direction. 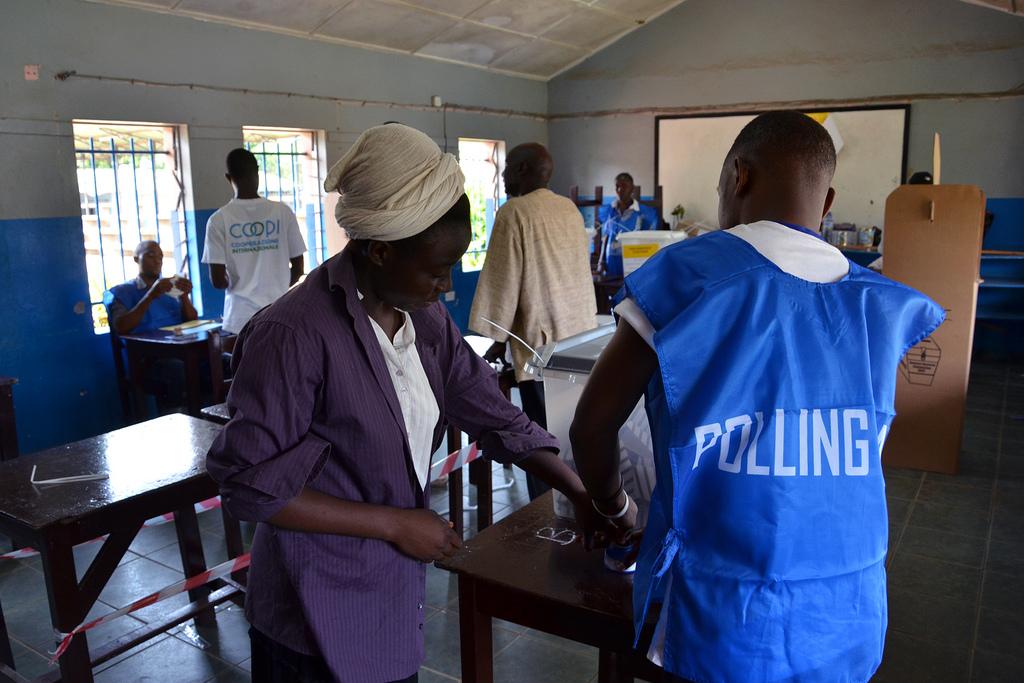 A voter at the polling booth in Sierra Leone’s 2012 elections. Credit: Commonwealth Secretariat.

On 7 March, Sierra Leoneans will head to the polls to vote in general elections that could hold critical significance for the country’s democracy.

The results could go in one of two directions. On the one hand, the ruling All People’s Congress (APC) could retain power despite widespread dissatisfaction with its record. This would allow it another five years in office during which it might continue a worrying creep away from open democratic practices. It would also mean outgoing President Ernest Bai Koroma will have succeeded in his attempts to monopolise power and get his unilaterally anointed successor, former Foreign Minister Samura Kamara, into office.

On the other hand, the election could see an opposition party emerge victorious. We would have to wait and see how the new government would approach Sierra Leone’s many challenges, but the country would witness another remarkable transfer of power, as occurred in 2007. This outcome would cement Sierra Leoneans’ reputation for being an unforgiving electorate.

In the short-term, a change of power could also see faith restored in Sierra Leone’s respect for rule of law following some concerning recent trends. In 2015, for instance, the president sacked his popular deputy, Sam Sumana, in the middle of the Ebola epidemic. The regional ECOWAS court later ruled that Koroma had acted unconstitutionally and the state should pay damages. Then, as his second term approached its end, Koroma’s supporters launched a campaign branded “more time”. They suggested the Constitution’s two-term limit should be changed to allow the incumbent “more time” to allow for time lost from dealing with the Ebola crisis. Concerned Sierra Leoneans and pressure from the international community eventually got them to back down.

A resilient APC against a divided opposition

Heading into elections, most political parties with the APC’s governance record would be destined for defeat. After all, the major issues of the campaign include: the dismal state of the economy; chronic youth unemployment; the embezzlement of donor funds during the Ebola epidemic; the mismanagement of relief contributions for the victims of the 2017 mudslides; unprovable allegations of presidential aspirants with dual citizenship that should disqualify them from running; and numerous other corruption scandals.

However, despite these challenges and the popular discourse of “change” in the election campaign, it is difficult to predict how the electorate will vote. There are also concerns over whether the results will ultimately reflect the will of the people and be free and fair.

The APC remains a resilient party with significant bases of support. Its prospects going into the vote will be boosted as much by its claimed political mastery and “99 tactics” for winning elections as by its use of intimidation and violence as well as by the advantages of incumbency.

Its chances of winning are also bolstered by the divided nature of the opposition. Sixteen political parties have fielded presidential nominees. However, among them, only two stand a real chance of ousting the APC. The first is Julius Maada Bio of the main opposition Sierra Leone People’s Party (SLPP). The second is Kandeh Yumkella of the newly-minted National Grand Coalition (NGC). The other candidates are, at best, hoping to position themselves well for juicy appointments in the next government in return for their support.

Except for their length, there is little that differentiates the manifestos offered by the various parties. In a country where half the population is illiterate, most parties’ voluminous documents look more like bids to international donors than appeals to the people.

Only the NGC’s policy proposals arguably stand out for their transformative potential. The rest largely offer the usual suggestions of diversifying and increasing the country’s revenue base from mining and of tackling corruption. Many voters are likely to be more swayed by the specific candidates on offer and by the records and reputations of the parties.

On this front, the SLPP may be at a demographic disadvantage. Over 40% of potential voters are under the age of 25. This means they are too young to remember the SLPP’s time in office, an era which can be looked on favourably when compared to the difficult past decade under the APC.

The SLPP’s presidential flag-bearer can also be seen as a weakness. Maada Bio was a member of the National Provisional Ruling Council, the military junta that ousted the APC in a coup d’état nearly 26 years ago. Although he has campaigned feverishly across the country in his second run at the presidency, popular opinion suggests he has not managed to shake off doubts regarding his credentials to be president in a democratic Sierra Leone.

There are also persistent claims that Bio has not been gainfully employed since leaving office and handing power over to a civilian administration in 1996. A popular refrain about his candidacy asks: “How is he going to create jobs for the unemployed youth when he himself has not held a job for over 20 years?”

By contrast, the NGC’s leader is a clear asset to his party’s prospects. The charismatic Kandeh Yumkella, an agricultural economist and former head of the United Nations Industrial Development Organisation, has emerged as the X factor in these elections. He previously wanted to be the flagbearer for the SLPP, the party his father helped found, but instead broke rank and formed the NGC last year. He has a relatively clean track record and, in the 15 February presidential debate, demonstrated a firm understanding of the issues.

Whereas Bio and Kamara are haunted by allegations of past corruption, supporters see Yumkella as the change-agent who could rescue the country. He has conducted a sophisticated campaign around the themes of transformation and national cohesion, while avoiding the kinds of negative calls to ethnic division that have been evident in past contests.

Focusing on the issues

If nothing else, the arrival of the NGC – which some critics dismiss as a merger of disgruntled former SLPP and APC members – has contributed to the detribalisation of Sierra Leonean politics heading into the elections. This means that, for the first time since early independence in the 1960s, Sierra Leoneans are hearing more genuine policy debates rather than simple appeals to primordial loyalties.

To be clear, there are still lingering claims of ethnicity surrounding various campaigns, but many of these are also drowned out by the mixed nature of most tickets. It is early days, but Sierra Leone’s politics and voters only stand to benefit as the focus shifts slowly away from candidate’s identities towards a deeper discussion of bread and butter issues.

How this plays out on 7 March remains to be seen. The outcome from Sierra Leone’s date with destiny is difficult to predict.

For the ruling APC, another five years would allow it to consolidate its rule and crystallise the direction in which the country is heading. For those worried by that prospect, this is an election the opposition cannot afford to lose.