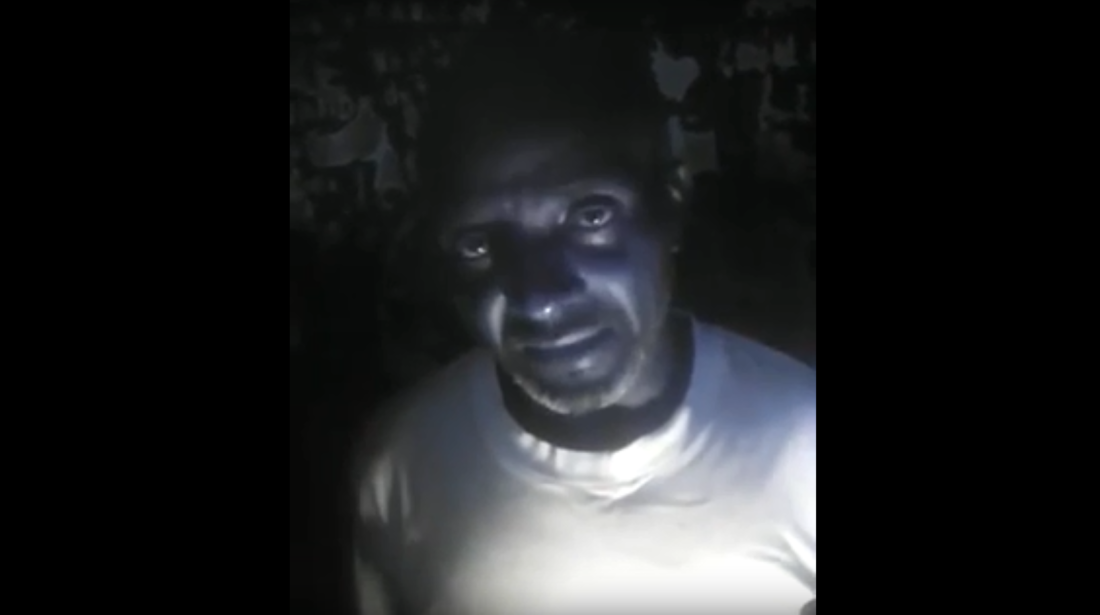 In 2017, some detainees filmed a video from inside Cameroon’s notorious prison known as The Bunker in Yaoundé.

A few blocks from the European Embassy in Yaoundé stands the Secrétariat d’Etat à la Défense (SED), surrounded by tall walls and patrolled by armed guards. This is the headquarters of Cameroon’s gendarmerie, the division of the army in charge of internal security. In the building’s basement, there is a dank jail nicknamed “The Bunker”.

This is where Tsobonyi Alphonse Tatiah Melou spent five months last year, often lying on the wet floor, his body aching from daily torture by security forces. He was not allowed to see his family or have access to a lawyer. The prison, he said, “is a hell, it’s a different world”.

The Bunker is composed of a couple dozen cells, crammed with people and without any sunlight. In 2017, some detainees managed to film a video showing their appalling living conditions.

According to Melou’s estimate, at least 75 people were tortured in the basement where he was held while he was there. This matches accounts from other detainees interviewed by African Arguments by phone and a report published yesterday by Human Rights Watch independently that confirms 26 such cases. The Ministry of Defence in Cameroon has not replied to requests for comments.

The military police accused Melou of supporting one of the Anglophone armed groups operating in the west of Cameroon. The dozen militia groups operating in the region are seeking independence for a country they call Ambazonia. Individuals claiming allegiances to the various groups have killed security forces as well as kidnapped and killed civilians.

Melou and three former detainees interviewed by African Arguments all recounted similar stories of how they ended up in The Bunker. They say they were arrested by Cameroonian security forces, beaten and accused of being part of an Anglophone armed group, and then transferred to The Bunker.

Some other detainees held in The Bunker were first arrested by security forces in Nigeria and underwent forced repatriation despite being registered as refugees or seeking asylum. This was the case with Tita Tebid Diamond, who proudly admits to being an activist for Anglophone independence. “What I did was self-defence,” he says. “I fought those who fought our people. I killed those who killed our people.”

There are reports of others being similarly seized in Nigeria such as Sisiku Ayuk Julius Tabe, the self-styled “interim president” of Ambazonia, and his supporters. Tabe also spent some time at the SED, but his high-profile spared him from torture.

For most of those arrested, the torture began very swiftly. Diamond, for example, was transferred to Abuja in January 2018 and put on a plane operated by the Cameroonian army. His torment began soon after take-off. “They were hitting us with guns, telling us where we’re going, [that] they’re going to kill us. Some of them promised they would throw us out of the plane,” he says. “Most of the guys I was with were crying…but I was not scared…because deep in my heart I knew that if I’m being murdered for a cause that is genuine, to me it’s worth the stress.”

Melou’s beating began with a similar immediacy. His torture was filmed by his tormentors themselves. The video, shared on social media, shows Melou lying in the mud while gendarmes kick his head and beat his feet with machetes. A BBC Africa Eye documentary tracked the location of the video as being outside the courtyard of the gendarme station in the village of Nkgonle in the Southwest region. In the film, the forces accuse Melou of killing their colleagues; he says he is just a farmer.

Following the BBC video, the government said the gendarmes suspected of the violence had been brought to a military tribunal. At the same time as this was happening, however, Melou was being tortured in The Bunker.

The SED has been used incarcerate political opponents, journalists and alleged Boko Haram members since the late-1990s. It officially became a jail in 2012. Today, according to the interviews conducted by African Arguments, its cells are filled with Anglophone detainees.

The Bunker’s cells are reportedly so packed that prisoners cannot lie flat on the ground to sleep. Instead they have to sleep sideways or seated. Many are chained together so they cannot even go alone to the toilets. Moreover, they say they are beaten by the guards daily. “Every morning time, they have to give you seven strokes under your legs,” says Melou, confirming what other detainees have said. “They use planks.”

This is often just the start of torture that continues through the day. One method used is called the balançoire (“the swing”). Guards handcuff prisoners’ hands together and tie their legs with a metal chain. A metal rod is passed between the hands and the victim is lifted and held up, hanging between two or three chairs. “When they put you like that,” says Melou, “it just paralyses you. You cannot do anything again.” The guards then beat the detainee with whatever they have at hand, from wooden spoons to electric cables.

“Different guys, they had different torture techniques,” says Diamond. “They would put you and tie your hands behind. Put the mask on your face, pour water [and] when you’re about suffocating, they stop and ask you questions.”

During these interrogations, detainees were asked to confess or to divulge details of other people suspected of involvement in Anglophone militias. Diamond also describes other techniques used to extract information, including beating prisoners, or hanging them upside down and whipping them. “When we got to SED, it was mass torture,” he says. For the first time he saw riot batons, which were used to beat him. “I used to only see these things on the TV,” he adds.

In 2017, Amnesty International documented these torture methods being used in the Far North Region of Cameroon as well as in The Bunker. They are also reported in yesterday’s Human Rights Watch report.

“Torture is not only happening in SED, it’s happening across many detention centers in Cameroon, in particular in illegal detention facilities,” wrote Philippe Bolopion, Deputy Director for Global Advocacy at Human Rights Watch, in a statement. “There is no accountability. Through their silence, authorities are condoning abuses. Until we see perpetrators of torture held responsible, we can expect more human rights violations.”

“My priority is that the people should get free”

After a few months at The Bunker, both Diamond and Melou were moved to the Kondengui prison in Yaoundé, where they are today. The jail was built in 1968 to host a thousand prisoners. It now contains four times as many. It is so packed that people have to sleep in the open courtyard, rain or shine. Those with money can buy a spot in one of the less crowded parts of the prison – that’s where the VIP political prisoners are held – or bribe guards to allow them access to phones.

But money cannot buy everything in Kondengui. The Anglophone detainees are facing trial at a military court and their hearings keep getting adjourned. “Some people have gone to court more than forty-something times, but no judgement,” says Melou, who hasn’t been able to attend his hearings because of his health. “I cannot see far. I also have weak legs. In my spinal cord, which they hit in SED, I still feel pain.”

In addition to their own situations, Melou and Diamond are worried about their families. Melou has five children. “They are young, the mother is struggling with them,” he says. This February, his 27-year-old brother was shot dead and he wasn’t able to attend the funeral. “We have no future, no hopes,” he says.

Diamond, the activist, is more defiant. “What [do] I think will happen to me? At this point in time, what will happen to me is not my priority,” he says. “My priority is that the people should get free. If it takes me spending the rest of my life in jail for this cause, so be it.”