Western Sahara: Natives of the desert, natives of Africa?

The identity of the Saharawi people is rooted not just in language, customs and history, but solidarity. 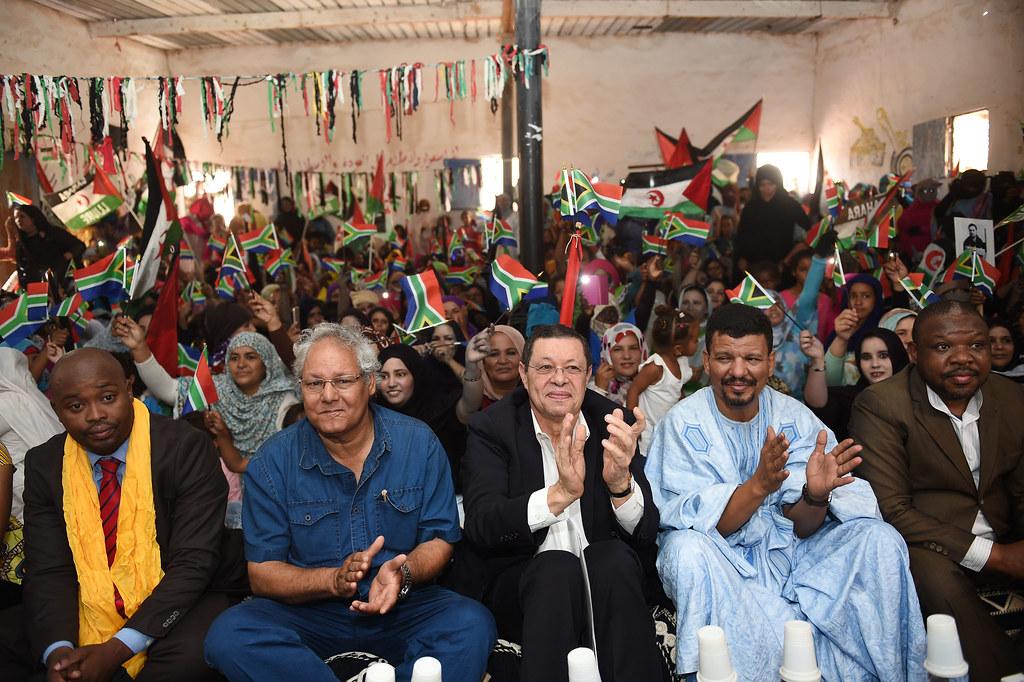 South Africa’s Deputy Minister of International Relations and Cooperation on a visit to a Saharawi Refugee Camp in Tindouf in 2018. Credit: DIRCO.

This is the final article in the seven-part series Living In Translation about language and identity. They are guest edited by Nanjala Nyabola. See all the articles here.

Just over four decades ago, on 27 February 1976, the people of the Western Sahara declared the constitution of Saharawi Arab Democratic Republic. In this moment, as they battled against Morocco and Mauritania for independence, the Saharawi people suddenly changed from being a group of tribes to a unified nation.

43 years later, the Saharawi are still struggling for freedom and parts of the Western Sahara remain under Moroccan illegal occupation. But what is the identity now of this relatively young nation?

The Saharawis, which means “native of the desert”, are poorly known by most Africans. We are seen perhaps more as Arabs than Africans and some may think we should be integrated with Morocco. But is this true? Are we African? What makes the Saharawis distinct?

The Western Sahara has been inhabited as far back as the pre-historic era and there are lots of ancient cave paintings in the small mountains and rocky hills that dot the region. As a result of our complex history of movement, trade and interaction ever since, it is widely agreed among Saharawis today that we are a mixture of Amazigh (especially the Sanhaja Amazigh), Arabs, and black Africans.

According to the records of Carthaginian explorer Hanno the Navigator, Amazigh tribes have lived in the area since at least the 5th century BC. The first Arab migrations began around the 7th century and continued from the 8th to 12th centuries during which Islam became the dominant religion. Meanwhile, African tribes from further south have also lived or interacted in parts of the region for centuries. Military invasions led to intermixing, while the territory has long been an ancient crossroad for trade. Saharawis’ ability to survive in the arid desert allowed them to play a major role in transporting goods from the Mediterranean to the kingdoms and empires of the Central and West Africa, and in moving commodities such as gold and salt in the opposite direction.

Due to this history, the Saharawi today share a lot of common with their neighbours, in particular those in Mauritania, Morocco and Algeria. There are several aspects of Islam, shared histories, trade and familial relations that connect us. However, there are also many key differences, especially in those many small details that differentiate human groups: in tastes, music, literature and poetry, manners, clothing, and so on. We have forged a distinct identity from all our neighbours, not least through language.

We speak Hassaniya, like Mauritanians, but our very distinct dialect – spoken by all Saharawi – has lots of key differences in terms of tones and the dynamics that accompanied its development. In Mauritania, Hassaniya was highly influenced by French colonisation, which led to the adoption of many French words layered over the close and continuous influence of the African languages such as Wolof and Bambara. In Western Sahara, however, Hassaniya was much more shaped by old Arabic layered by Sanhaja Amazigh and Spanish words. That means that while Mauritanians say pambuterre (from “pomme de terre” in French) to mean potato and pommes for apple, for example, Saharawi talk of batata (from “patata” in Spanish) and tuffah (from Arabic).

The Saharawis clearly have their own unique language, art, customs and history that mark them out as distinct from all other groups, but what about broader identity? Do we see ourselves as part of the Arab-speaking world or as an African people?

The answer is that, today, we identify ourselves as Africans more than most of our neighbours. This is in part due to our shared history and tastes in music, clothing and manners, but mainly due to the strong support we have found on the continent over the last few decades for our struggle for freedom.

The Western Sahara was colonised by Spain from 1884 to 1975. When Spain withdrew, the territory was immediately invaded by Morocco and Mauritania. The Saharawis, organised under the leadership of the Polisario Liberation movement, fought back. While Morocco and Mauritania were strongly supported by France and the West in their colonial adventure, the majority of free nations in Africa supported Western Sahara’s freedom fighters.

African countries didn’t only oppose the Moroccan invasion, but tried their best to convince the Moroccan king, Hassan II, to end this sad episode of African history. The Organisation of the African Unity (the precursor to the African Union) deployed all its diplomatic and political efforts to influence Morocco. It then recognised the Saharawi Arab Democratic Republic as an independent and sovereign state, dealing a blow to the Moroccan attempts to legitimise its occupation.

As a result, the Saharawi Republic was a founding member of the African Union (AU), while Morocco was barred. The Saharawi Republic participated in the endeavours of the AU to build unity on the continent. At the same time, the Moroccan regime, which has always privileged its ties with the West and the Arab world over its African ties, turned the other way and even tried to apply for membership to the European Union after leaving the OAU in 1984. This latter move was roundly criticised as ridiculous, but it represented the tendency of Morocco’s elites to consider the country more European than African or even Arab.

In contrast, Africanism in the Western Sahara remains strong and the AU largely maintains its strong position in favour of the decolonisation of Saharawi territory. The Union’s readmission of Morocco in 2017 raises some fresh concerns as to whether Morocco’s charm offensive, particularly in West Africa, could bear fruit and lead to a more equivocal stance from the AU in the coming years. But for now, the Saharawis’ clear identification as African encompasses not just linguistic, historical, political and social ties, but also culture, from Saharawi traditional music, to clothing and customs. The Western Sahara has firmly rooted itself in Africa.

On 25 and 26 March 2019, the Southern African Development Community (SADC) organised a conference of solidarity with the Saharawi Republic. For two days, the conference discussed how the SADC countries, plus Nigeria, Kenya, Algeria, Sao Tome and Principe, Uganda, Venezuela, Cuba and some other historic liberation movements can assist the Western Sahara’s freedom. They declared that they “remain unequivocally committed to the cause of the people of Western Sahara”. The majority of the leaders who spoke proclaimed that Africa will never be completely free as long as the Saharawis are under occupation.

Malainin Lakhal is a journalist, human rights activist and campaigner for the independence of the Western Sahara.