President Saied’s sacking of the government may be popular, but what Tunisia needs is to strengthen its democracy, not dismantle it. 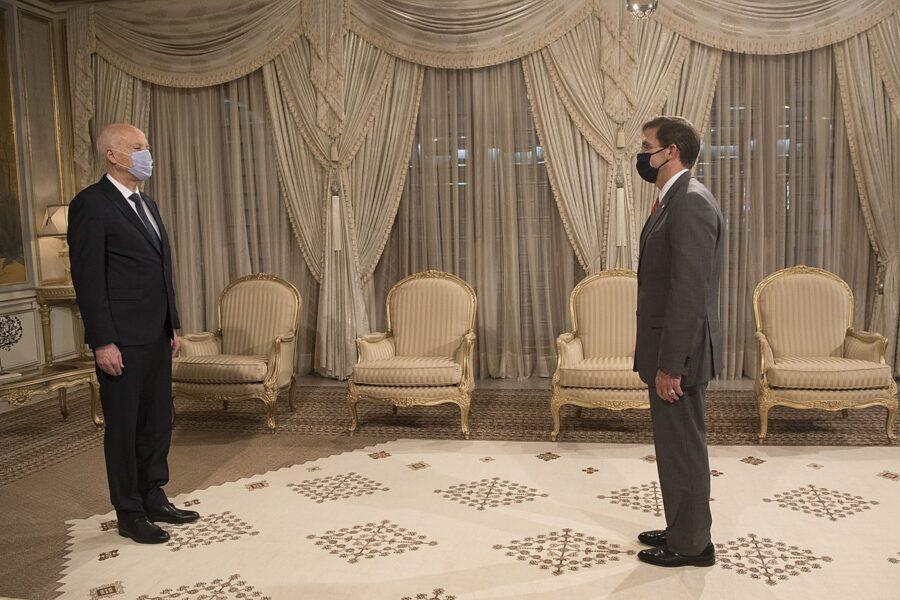 On 17 December 2010, 26-year-old fruit vendor Mohamed Bouazizi set himself on fire in the town of Sidi Bouzid after police confiscated his cart. Driven to the edge by economic despair and humiliation at his harassment, he became the spark of Tunisia’s 2010/11 uprising against economic underdevelopment, corruption and dictatorship. These protests led to the ouster of long-time strongman Zine El Abidine Ben Ali and inspired the so-called Arab Spring movements elsewhere in the region.

Following its revolution, Tunisia respected the rules of democracy. It enshrined a progressive new constitution in 2014 and built institutions to safeguard freedoms, albeit imperfectly. In 2015, the Nobel Peace Prize was awarded to the Tunisian National Dialogue Quartet, a group of four civil society organisations that helped mediate efforts to consolidate pluralism. While Egypt witnessed a slide into fierce authoritarianism in the wake of the Arab Spring, and Syria, Yemen and Libya fell into civil war, Tunisia stood out as an Arab democratic lodestar.

Today, however, Tunisia’s political gains are in peril due to the recent exceptional measures taken by President Kais Saied. On 25 July, he responded to protests against a tattered economy, endemic corruption and inept handling of the pandemic by sacking Prime Minister Hichem Mechichi, suspending parliament, stripping parliamentarians of immunity, and assuming judicial authority. Saied thus monopolised the three branches of power: legislative, executive and judicial. In justifying these actions, he appealed to Article 80 of the constitution, which allows the president to take extraordinary measures in the case of “imminent danger”. However, this clause necessitates consultation with the head of government and speaker of parliament, and that the parliament be in continuous session – none of which applied to Saied’s measures.

The reaction of the international community – from the West to the African Union – has so far been tepid. Policymakers and legal experts have been caught up in semantics of whether Saied’s measures constitute a coup, a soft coup or a constitutional coup. In the meantime, the hopes of staying on democratic course in Tunisia are shrinking with every day that passes.

Over a month on, Tunisia remains in limbo with no checks and balances on President Saied’s power. In fact, he just announced an indefinite extension of the emergency period that was initially in place for 30 days. No new prime minister has been named or cabinet formed, nor has a roadmap or calls for a national dialogue been announced. Saied has repeatedly declared that he will not retract his actions and negotiate with the “corrupt”, but without specifying who falls into this category.

Saied justified his exceptional measures as a response to the demands of the people who called on the government to step down on 25 July, some clashing with security forces and attacking the offices of Ennahda, the party with the largest bloc in parliament. His actions enjoy public support, with local polling suggesting 87% approve of them.

Tunisians had every right and reason to mobilise. The country is suffering one of the worst COVID-19 mortality rates per capita in Africa and the Middle East. Public services remain inadequate and the unemployment rate stands at around 17%. Tourism has suffered due to terrorist attacks in 2015 and the pandemic, and government debt stands at 85% of GDP.

If there is anything the turmoil leading up to 25 July has shown, it is that Tunisia’s young democracy was fragile and one that preserved corruption and kleptocracy. What Tunisia is experiencing now, however, is not a socially accountable democracy. It is a populist version with Saied presenting himself as the voice of the people in their revolt against the corrupt political class. He has launched investigations into political figures and parties suspected of corruption and placed travel bans on them. There is a possibility he might soon target political opponents more selectively.

There is no doubt that systemic reforms against corruption are desperately needed in Tunisia, but the solution is to strengthen, not dismantle, democracy. Political and civil society actors must be unequivocal in their stance: we will not prop up a more authoritarian Tunisia. The country needs to root out corruption, not give absolute power to a single individual. Those suspected of corruption should be subject to due legal process.

Tunisia needs to appoint a new prime minister, but this is not enough. It needs a roadmap out of the crisis through a national political dialogue and institutional continuity. Even if discredited in the public eye, political parties and parliament cannot simply be upended. It is the votes of the Tunisians that should determine which new representatives are entrusted with helping them out of the crisis. A capable government needs to be formed with a broad consensus of political parties and civil society to help bolster the sluggish economy and address the ravages of the pandemic.

There are two foreseeable scenarios for Tunisia right now. One is the creation of a third republic. The first Tunisian republic began in 1959 and ended with the ouster of Ben Ali in January 2011. The second followed and was enshrined by the 2014 constitution. A third republic would require a referendum on a new political system and constitution as well as fresh parliamentary elections. If this occurs, Saied is likely to seek a constitution that enshrines a presidential system. Tunisia’s current parliamentary system is complex and has stalled progress, but it is much harder for a parliamentary system to pave the way to dictatorship than a presidential one.

The second possible scenario would be a return to constitutional legitimacy, namely by reinstating parliament and returning immunity to parliamentarians with the exception of those deemed by law as corrupt. This may also involve the appointment of a caretaker government to help the country out of the crisis and organise early legislative elections. In this scenario, Saied could seek a revised electoral law that makes it harder for smaller parties to win seats. Parties currently need to get at least 3% of the vote to be represented in parliament, but the president could push for this to be amended to 5%. Proponents argue that this would lead to a less fractured parliament and thus make reaching consensus easier. Critics say it would alienate smaller parties and their voters.

Regardless of which scenario plays out, Tunisians need guarantees that their democracy will not be demolished. So far, early signs warrant concern. The day after Saied’s power grab, security forces raided the offices of Al Jazeera, which is seen as sympathetic to Ennahda. A few days later, independent Tunisian MP Yassine Ayari, an outspoken critic of the government and military, was sentenced to two months in jail by a military court. He became the first MP to be prosecuted since Saied lifted parliamentary immunity.

Accountability, human rights, and rule of law must be preserved in Tunisia. These are essential for keeping in check authoritarian drift by the president and overseeing reforms launched by any incoming cabinet. Tunisians need assurances that new elections will take place without intimidation and that there will be no disruptions to the normal procedures of changing the constitution.

Tunisia’s civil society needs to pressure the leadership to return the country to the correct course. If we don’t, we will have been complicit in potentially compromising our fledgling democracy. We will also have been complicit in prolonging the woes of Tunisians because the current impasse will hinder the ability of the authorities to address the country’s dire economic and health troubles.

Let us all not forget the struggle of the Tunisian people towards building a progressive pluralistic society and raising the hopes of democratic aspirants across the Arab world. Civil society must defend public and private rights and freedoms. We must re-align with citizens’ right to self-determination through the ballot box. It is imperative to help Tunisia during this critical juncture before it is too late. Don’t let Tunisia’s democracy slip.

An open call by African intellectuals for ...

Raed Ben Maaouia is the co-founder of Tunisia’s Social Accountability Association, and a member of Political Lab (Lab 117) Initiative.