Nigeria’s smallest yet most populous state continues to destroy informal settlements in defiance of the courts. 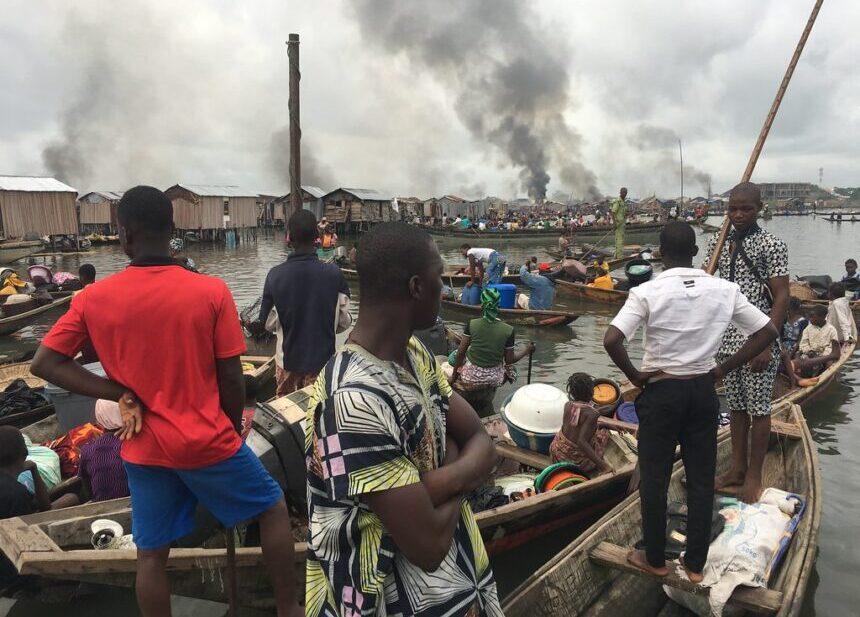 On the night of 8 April 2017, the people of Otodo Gbame went to bed thinking they were safe. The previous year, the Governor of Lagos had promised to destroy this crowded waterfront community, but a November 2016 court ruling had forced the state government to suspend its plans.

Otodo Gbame’s 30,000 residents had breathed a sigh of relief at the judgement and believed their homes were secure, at least for the time being. Yet just a few months later, on the morning of 9 April at 4am, they awoke to chaos. Despite the injunction, state security forces descended on the community, shooting indiscriminately, and tearing down the roofs over their heads.

Some people were already living in the open air due to earlier eviction efforts. But this time, no one was spared. Startled residents escaped on their boats or were rescued by members of a neighbouring riverine community, casting a final glance backwards as their homes burned to the ground.

“That day was horror,’’ says Paul Kunnu, 35, spokesperson for Otodo Gbame community. “We were not able to salvage anything.”

He says the government taskforce also had gunboats on the water and that he only escaped unscathed thanks to the “the mercy of God’’. At least one of his neighbours was killed in the operation.

When morning broke, all that was left was plumes of smoke, the ashes of the community’s belongings, and 30,000 people newly without homes.

The story of Lagos State’s waterfront communities and successive governments’ destruction of them begins much earlier.

For decades, the coastal city has been a magnet for people across the country searching for opportunity. Today, Lagos State is the country’s most populous – despite also being its smallest by size – with an estimated 23 million people. 53.9%  of this population live in informal settlements and, with space scarce, many poor people have made their homes in makeshift structures around waterways in neighbourhoods that lack electricity and other essential services.

For many decades too, these unplanned settlements have been under threat from the government. Many people trace the first major slum eviction to Maroko in 1990 when 300,000 people were displaced. And the destruction of informal communities has continued ever since, accelerating in particular after Lagos State unveiled its 2012-2025 plan to become “Africa’s model megacity and global, economic and financial hub”.

“Lagos grew in an organic development,” explains Olusegun Oriye, Professor of Architecture and Urban Studies at Joseph Ayo Babalola University. “[But] in the organic growth, the opportunity to plan will not be there. [The] government will then find itself wanting to provide amenities for people, but, in the process, [informally built] houses are along the way… So government will not have any choice than to do some urban renewal that may inconvenience people.”

This trend of slum clearances reached a new intensity in October 2016, when the then governor issued a blanket order for every resident of an informal settlement in Lagos to vacate their home within seven days.

This announcement ripped through poor communities, who were not prepared to give up without a fight. About 40 of these settlements decided to join forces and create the National Slum/Informal Settlements Federation, with each community putting forwards two representatives.

The Federation first asked for dialogue with Lagos government but had their repeated requests turned down. They then submitted a petition to the state assembly, which similarly yielded nothing even after peaceful protests. On 7 November, the coalition’s legal appeal reached the courts. This time, their voices were heard as the judge issued an injunction calling on the state government to suspend its eviction order and start mediation with residents over their relocation.

Residents of Otodo Gbame and other settlements celebrated this temporary reprieve. Yet it was just two days before the Lagos government defied the ruling and began partially demolishing the community. Five months later, in April 2017, it ran out of patience and finished the job.

Following this devastating event, the Federation – in conjunction with the Justice & Empowerment Initiative (JEI), an advocacy organisation – returned to the courts. The judge again ruled in their favour, declaring that the government had failed to “adequately notify’” the community and “provide alternative settlement”. The court said that the destruction of Otodo Gbame had been “unconstitutional” and an “infringement of the Applicants’ Fundamental Right to protection from Cruel and Degrading Treatment”.

The state immediately appealed. The Court of Appeal is still yet to hear the case, but – as before – the judgement has not deterred the government. In the intervening years, and with a new governor at the helm since 2019, Lagos state has continued to evict poor communities.

“This administration and the previous one have shown that they are willing to go out of what the court says, and that is dangerous for the principle of the rule of law,’’ says Megan Chapman, co-director at JEI.

“We have sought political solution to see how we can implement the judgement in the fairest way, yet they keep frustrating it,’’ adds Sani Mohammed, the policy and advocacy coordinator for the Federation.

Lagos Ministry for Physical Planning and Urban Development did not respond to repeated request for comment.

The Federation and JEI are currently pursuing further court cases against the government. These include a petition regarding an impending eviction and contempt charges against the state for its repeated violation of the 2017 judgement. According to Chapman, a previous case related to the demolition of Tarkwa Bay in January 2020 could not be decided because the state governor is constitutionally immune from prosecution. She and Mohammed admit that they are fighting an uphill battle.

According to Nigeria’s Land Use Act of 1978, the government has the power to acquire any piece of land in its jurisdiction for “overriding public use”. The state government uses this justification for its evictions, which it suggests are necessary to modernise the city for the wider good and to turn Lagos into a model metropolis.

Some people are sceptical of this argument. “Sometimes, we give the government more credit than they deserve,’’ says Chapman. “If the government is concerned about people’s health and wellbeing, it will not turn them out of the shelter they are living in no matter what the conditions are when they have nowhere else to go.”

For Mohamed, the writing is on the wall for Lagos’ informal settlements. “Like what happened in [the] 1885 scrambling and partitioning of Africa, it is now the scramble of Lagos by the property class. The poor man will not survive it.”

However, for him, the key fight is to ensure that the government pays fair damages to the residents that it evicts.

“We do not have a problem with the government acquiring lands for overriding public use, but what we are saying is that the government should compensate the people according to the law and according to humanity,’’ says Mohammed. “The real issue is about the right and dignity of human beings.”

For residents like Khadijah, a middle-aged woman who asked to remain anonymous, the dignity of poor residents is overlooked in this struggle for land. On New Year Eve 2021, she sat in front of a dilapidated cement building in Orisunmibare, a settlement located on swampland and mostly made up of endless rows of weathered wooden shacks.

This community of 6,000 people seems to be next that will be destroyed. In November 2021, Lagos state issued a ten-day demolition notice to residents with no explanation or plan, let alone details of compensation or relocation. Once again, the government disregarded the court ruling that had found its similar eviction of Otodo Gbame “unconstitutional…cruel and degrading”.

‘’Without compensation or a place to relocate us, there is no option for us and this a very large community,’’ said Khadijah. “If they come, we would have to leave. I don’t have anywhere to go. I will go where destiny leads.’’

Cost of living protests descended in riots last month. Food and fuel prices are set to rise further. In late-April, protests against the soaring cost of living erupted in cities ...
By continuing to browse the site you are agreeing to our use of cookies.