Both the opposition and ruling party hope the upcoming by-elections will lay the groundwork for 2023, but in very different ways. 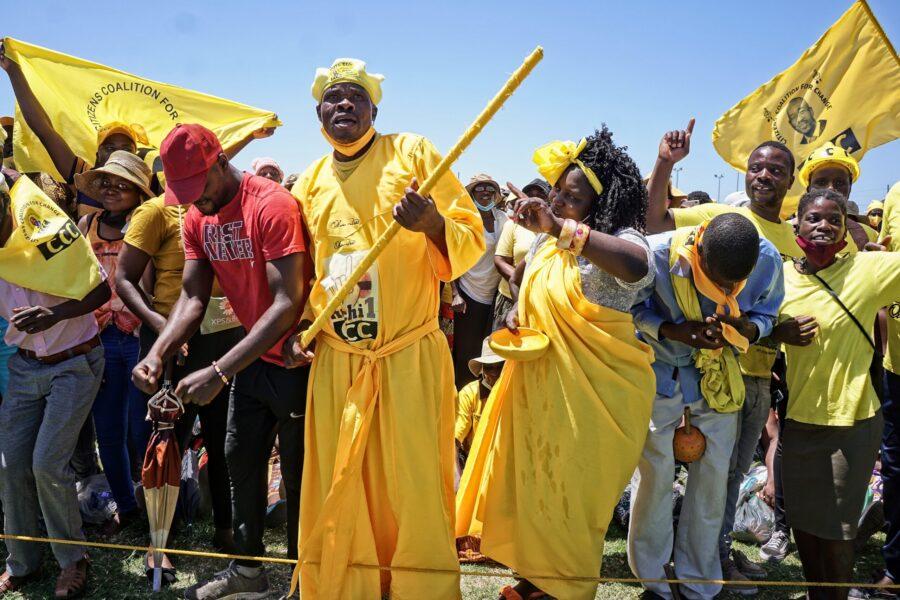 Godfrey Karembera (aka Madzibaba VeShanduko) and others dance at a CCC rally in Bulawayo. Karembera was assaulted by police offices and charged with disorderly conduct for encouraging people to vote for CCC in the upcoming by-elections. Credit: Tendai Marima.

On 26 March, voters in Zimbabwe will head to the polls for by-elections in over 100 parliamentary and council seats. And, once again, political tensions cast a dark shadow over the credibility and peacefulness of the process. Beatings, death threats, arrests, and restrictions against the opposition have polarised the country, despite President Emmerson Mnangagwa’s campaign promise to build a united nation.

These elections will be the first in which the opposition Citizens Coalition for Change (CCC) will participate. Led by Nelson Chamisa, the party was born out of lost court battles and infighting over the leadership of the former main opposition Movement for Democratic Change Alliance (MDC-A). The CCC has replaced the MDC’s red for yellow and swapped its open palm sign for a pointed finger, symbolising that it puts citizens first.

Despite being weakened by vicious fighting between MDC factions, the CCC is hoping for big wins in the by-elections that could lay the groundwork for victory in the 2023 polls. Energised by Zambia’s ejection of the repressive Patriotic Front last year, the CCC hopes to emulate its neighbour and remove the authoritarian Zanu-PF party that has been in power since independence in 1980.

However, while the yellow makeover has invigorated the opposition’s grassroots and digital campaigns, the possibility of free and fair elections is low. Violence and state suppression have raised concerns over the integrity of 2022 vote and could be a grim precursor to Zimbabwe’s electoral environment in 2023.

In the run-up to the by-elections, there have several instances of violence and repression. The police have prohibited several CCC rallies and maintained a heavy presence at many others. In rural Gokwe last month, authorities tear gassed an opposition rally, while in Marondera, a riot squad cordoned off the stadium claiming the gathering had been banned. In February, violence stirred up at a CCC rally in Kwekwe resulted in one death and dozens of injuries. Several opposition supporters have also reportedly been beaten or had their homes torched by Zanu-PF supporters.

There have also been some high-profile instances of alleged police brutality. In 2020, for instance, three women – including a CCC parliamentarian –went missing for nearly 48 hours before being found dumped in a market. They claimed to have been abducted and tortured by state agents. They were then arrested for allegedly lying about their experience. Just last week meanwhile, a popular CCC campaigner known as Madzibaba VeShanduko was arrested and allegedly tortured by police.

According to the Zimbabwe Peace Project, the electoral environment is increasingly volatile, with 70 incidences of violence recorded in February as compared to 55 in January. A report from local rights monitor Heal Zimbabwe also lists incidences of rural district administrators pressuring village headmen to campaign for Zanu-PF or and avoid opposition rallies.

This electoral violence sets a worrying tone for the 2023 election, which is likely to be another two-horse race between Mnangagwa, who will be 80, and Chamisa, who will be 45.

In 2018, Mnangagwa narrowly won the presidential election with 51.44%, which was upheld despite a court challenge. This was Zimbabwe’s first election that did not feature the late Robert Mugabe and it was marked by blood as soldiers fired on opposition protesters in Harare, killing seven people.

The families of those victims are yet to see justice and the military continues to play a central role in the governance of Zimbabwe and the politics of Zanu-PF. Though deeply fractured, Mnangagwa’s rule is underpinned by the same military force that enabled and, ultimately, ended Mugabe’s 37-year rule. Vice-president Constantino Chiwenga, a former military man thought to have political ambitions of his own, remains influential and has vowed that the CCC will be defeated like “how we crush lice with a stone”.

As well as being marked by state violence, the upcoming by-elections have also seen worrying irregularities. The credibility of the voters’ roll, for example, has been called into question, with an analysis by the activist group Team Pachedu finding 3,200 people over the age of 100 and several others registered using two identity card numbers. Thousands of constituents have also been registered with obscure addresses. In the Zanu-PF stronghold of Uzumba Maramba Pfungwe, 10,505 out of 26,477 registered voters have incomplete addresses or phone numbers listed as their place of residence.

Team Pachdeu along with the Election Resource Centre have also expressed concerns at the assignment of voters to newly created polling stations without public consultation. This move reportedly violates S.35 (2) of the Electoral Act and has affected more than 170,000 voters. Jasper Mangwana, commissioner of the Zimbabwe Electoral Commission (ZEC), has referred to these claims as “speculation”.

Under Mugabe, the government had undue influence over the ZEC and is believed to have manipulated the voters’ roll to help rig elections since 2000. Following his overthrow, his successor promised a “new democracy”. Instead, Mnangagwa as overseen a repeat of the same allegations of poll rigging and ZEC bias. Despite public criticism, 15% of ZEC staff are former military personnel and its Chairperson Priscilla Chigumba has said the commission will continue to hire from the army.

Needless to say, a functioning and non-partisan ZEC is crucial to free and fair polls in Zimbabwe. More transparency in its processes and encouraging political parties to run a parallel vote tally would go a long way in preventing disputes over the electoral outcome and might reduce tensions ahead of 2023.

As Zimbabwe tests the waters ahead of elections next year, the opposition’s hope for a democratic transition after Mugabe continues to look elusive. Voters may heed Chamisa’s call to cast their ballots for CCC en masse, but if President Mnangagwa and Zanu-PF decide to cement their power by force, we will likely see a repeat of a familiar pattern and another protracted crisis that pushes a frustration nation further to the brink.